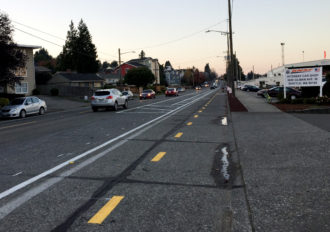 A new protected bikeway under construction in Interbay and Magnolia is about to fill a major gap in the region’s trail network and plug the neighborhood into one of the best trail networks in the nation.

A new two-way bikeway connects the Ship Canal Trail at Fishermen’s Terminal to Government Way (and Discovery Park) to the north and the Elliott Bay Trail to the south.

Once complete people will be able to bike from the downtown waterfront to Discovery Park and the Ballard Locks almost entirely separated from car traffic. The project also makes a vital improvement to the western terminus of the Ship Canal Trail, which until now ended just a couple very stressful blocks away from reaching Gilman Ave W. This improvement makes the whole Ship Canal Trail vastly more useful and comfortable.

This project is a slam dunk because it makes so many high-quality connections, which is the biggest challenge to biking in Seattle. Our city has many great stretches of bike infrastructure, but most of them end abruptly without making a meaningful link to another quality route. A bike route is only as comfortable as its least-comfortable segment, and both the Ship Canal and Elliott Bay Trails have been held back by their poor connections to and along Gilman Ave W. 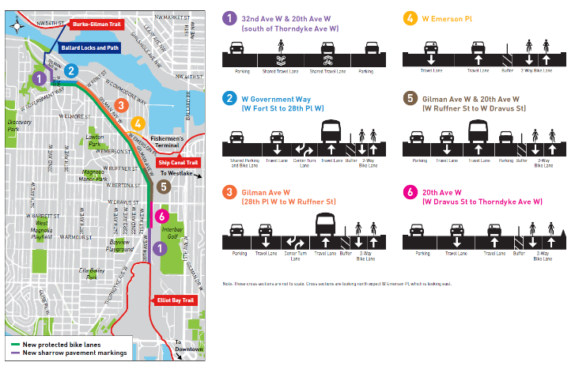 The new bikeway replaces a set of very outdated and inadequate bike lanes formerly painted on Gilman Ave W, which were located far too close to parked cars to be safe or useful. The result was that people driving used the center turn lane to pass people biking, which is not a good solution for anyone.

The new design moves both bike lanes to the east side of the street, which has very few driveways and street crossings due to the train yard and major industry uses. This means people biking only have one busy street crossing between the Elliott Bay Trail and the Ship Canal Trail: W Dravus Street. The signals at Dravus are getting a new bike signal, which should separate the times when people biking cross the street from times when people driving make turns. 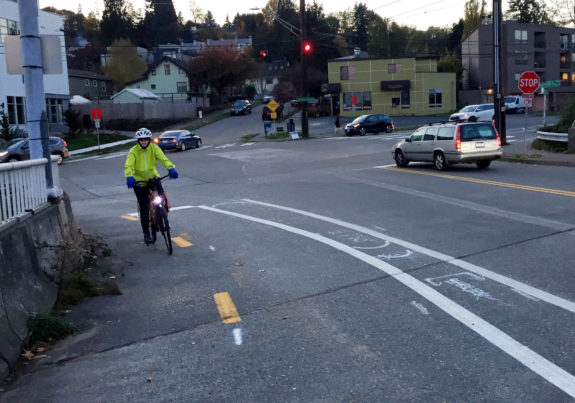 The W Emerson Bridge where it meets Gilman Ave W.

Locating the bikeway on the east side of Gilman Ave W also makes the connection over the W Emerson bridge to the Ship Canal Trail possible without ever crossing car traffic at the busy all-way stop. This is good for all users, but the removal of a left turn lane at the intersection has upset some residents (Side note to the petition author: This project helps people of all ages bike in safety and comfort, a major benefit you seem to have overlooked).

There may be ways to improve this intersection for everyone, but it’s important that all changes put safety first.

Construction is getting close to completion, and there are some interesting elements to the design. For one, buses on Gilman will now stop in-lane and board passengers in the buffer area between the street and the bikeway. This is the first time, to my knowledge, that SDOT is trying out this very low-cost solution for accommodating bus stops along a protected bike lane. The stops impacted have low ridership (the train tracks cut off that side of the street, greatly reducing the number of homes and businesses served by these stops), so this solution might not work in busier areas. SDOT has worked with Metro to come up with this solution, and I hope the agencies keep an eye on how it goes.

SDOT has also repurposed a heavy barrier to protect the bikeway across the Emerson Bridge, which curves in a way that anyone cutting the corner would encroach on the bikeway. Gotta love a smart solution that improves safety and reuses materials.

Now, if only the Ballard Bridge were safe and comfortable for people biking…