As traffic deaths and injuries increase, Mayor will reduce speed limits to 25, add red light and speed cameras, and give walk signals a head start

Mayor Jenny Durkan made her boldest safe streets stand yet when she unveiled a 25 mph speed limit sign on Rainier Ave S, the first of several thousand sign changes coming in the next year and a half. But that’s just part of her effort to get Vision Zero back on track in the second half of her term.

The city will also add more red light cameras, add speed zone cameras to five more school zones and have SPD conduct more crosswalk yielding enforcement. A new Major Crash Review Task Force “will convene a panel of experts to analyze every serious and fatal collision in our City and provide recommendations to prevent similar incidents from happening again,” according to an SDOT Blog post. It’s rather amazing such an effort doesn’t already exist, so this is a welcome effort. It could be especially effective if the task force is empowered to direct major street safety changes.

And one of the biggest improvements may be among the most difficult to see: A major increase in the number of traffic signals across the city that give people walking a short head start. In fact, the city has already been quietly implementing these “leading pedestrian intervals,” which are very easy and cheap to do. Essentially, you simply program the signal to show the walk sign a few seconds before the green light. That way people on foot are well-established and visible before people turning their cars start to move. This StreetFilms video explains the concept well:

Seattle has dramatically increased the number of these walking head starts in the past couple years, going from just a couple a few years ago to 125 today. And the city now plans to double that total by the end of 2020. 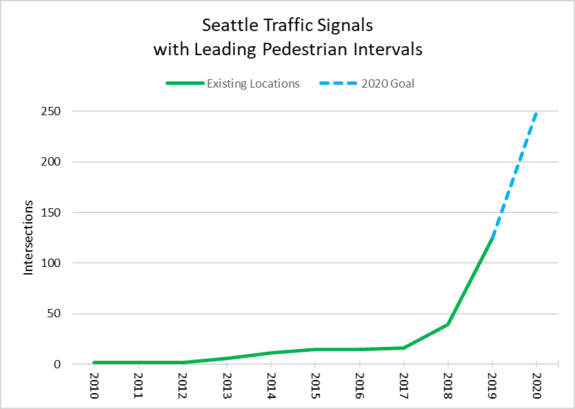 There are very few opportunities in traffic engineering to simply turn a couple knobs and get significant increases in safety. Walking head starts, providing walk signals on every cycle (#GivePedsTheGreen) and providing immediate walk signal activation are a few such changes. Very few people who drive will even notice that anything has changed, yet safety for people on foot will be significantly better. And SDOT says they are working on all these ideas:

We’ll also be taking a look at how we use push-buttons to address frustrations we’ve heard. We don’t want to make you press a button if you don’t need to, and there are also some places where giving pedestrians control to stop car traffic makes the most sense. So we want to make sure that we’re programming these buttons consistently with a pedestrian’s perspective in mind. 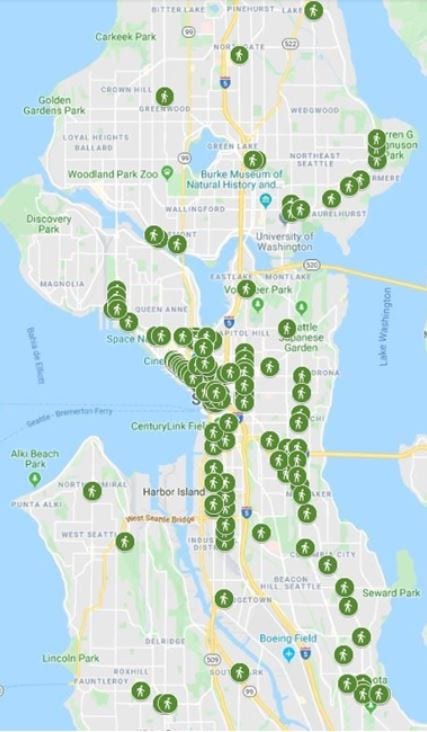 Map of the Leading Pedestrian Intervals in Seattle, from SDOT. Most were installed in the past year. I bet you didn’t even notice.

Of course, the walking head starts would be even more effective if we also banned right turns on red, but that’s the topic for another post…

Some longtime readers may be wondering, Didn’t we lower speed limits across the city a few years ago? Yes, sort of. In 2016, Seattle lowered speed limits downtown and as the default arterial speed limit citywide. So basically, any street that is busy enough to have a line down the middle has a speed limit of 25 unless marked otherwise. But many of the busiest and most deadly streets in our city have signs listing higher speed limits, sometimes as high as 45. That will change this year as SDOT lowers those speed limits as well, installing new 25 mph signs in their place.

SDOT says downtown and South Lake Union saw a 10% reduction in collisions and a 20% reduction in serious injuries and deaths after lowering the speed limits there.

These changes will only apply to streets the city controls, so state highways like Aurora and Lake City Way will require WSDOT to take action. So it’s great news that the mayor also said she would work with the state to change those speed limits, as well:

First: we are reducing speeds citywide to 25 miles per hour.

Lower speeds save lives. That is a fact. 80% of our roads will see reduced speeds, including Rainier Avenue.

I will be working with @wsdot to lower speeds on state highways in Seattle like Aurora and Lake City Way. pic.twitter.com/7UnwT4B6xw

Aurora specifically has seen a major increase in deaths this year. It was already very bad even before the devastating collision two weeks ago that killed two people and seriously injured another. It is going to take a lot more than some speed limit signs to fix that street’s problems, though lowering limits is a start.

All of this is in addition to the city’s recently-approved 2020-21 budget, which adds millions for building sidewalks, improving accessibility, increasing walking safety and building south end bike lanes and trails.

Mayor Durkan got off to a very tough start on street safety, delaying or outright cancelling safety projects across the city, especially in her first year and a half as mayor. This culminated in her spring 2019 decision to scrap the 35th Ave NE bike lanes at the last minute, setting off a major backlash and protest. So it is great to see her taking a leadership role here, and it is encouraging that many major projects are now moving ahead like the incredible recently-completed south downtown bike connection (stay tuned for more on that). It feels like she has turned a corner on safe streets. I hope she keeps this momentum going, because there is a ton of work to do.

17 Responses to As traffic deaths and injuries increase, Mayor will reduce speed limits to 25, add red light and speed cameras, and give walk signals a head start