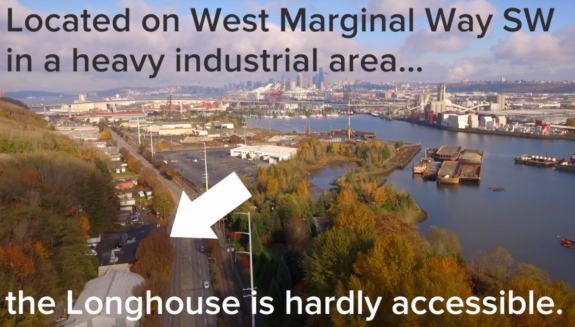 Screen capture from a Duwamish Tribe video describing the need for better and safer access to the Longhouse. Funding for this project was added to Seattle’s 2020-21 budget.

The City Council passed the 2020-21 budget Monday, including some vital investments in transportation safety and equity.

The wins are big and worth celebrating, though they are also uncertain due to the looming threat of I-976. If the initiative makes it through a court challenge from various cities, counties and organizations (including Seattle and King County), the Council will need to make some deep and devastating transportation budget cuts this winter.

Seattle Neighborhood Greenways highlighted some of the wins in a recent post, including:

So, yeah. This is exciting and vital work. But it and a lot of other vital work will but up the air if I-976 goes into effect.

There are at least two phases to the court’s decision that are important: The larger and ultimately most important decision will be whether all or parts of the initiative will be found unconstitutional. But the more immediate decision, being argued currently, is whether the court will grant an injunction to prevent the law from going into effect until that final ruling is made. Even if the final decision goes against I-976, the budget will have to be torn apart if the injunction is not granted in the meantime. So, yeah. Fingers crossed. We should learn this early decision soon.

UPDATE: The court granted the injunction Wednesday morning, delaying the law from going into effect pending the court’s final decision. This is certainly good news. Even if the final decision favors all or parts of I-976, agencies will at least have more time to figure out how to balance their budgets.

If I-976 does go into effect, it’s not yet clear what exactly will end up getting cut because the Council decided to save that debate for later. The Council could choose to save some of the investments currently funded by car tab fees, but only by cutting other vital transportation investments elsewhere or by somehow finding a big new revenue stream. Both are very difficult and uncertain tasks, and both will require some very tough debates.

And, of course, the budget devastation from I-976 would have impacts far beyond the SDOT budget. Transit agencies, local transportation departments across the state and WSDOT itself would all face massive budget cuts. The State Legislature will have some big decisions to make, such as authorizing alternative funding sources for this vital transportation work to continue. Seattle and King County also need to put their Transportation Benefit Districts (“TBD”) up for voter renewal, which is a complicated task on its own since the car tab funding mechanism is up in the air.

Currently, one of the only other taxing options for a TBD is sales tax, which is very regressive. So approving more progressive funding options for TBDs should be a priority for the legislature this session. Really, they should do that regardless of the I-976 ruling, though that ruling could make it dramatically more urgent and necessary. But how cool would it be to fund our transportation needs and cut sales tax at the same time?

(Full Disclosure: My amazing spouse Kelli is a Legislative Assistant to Councilmember Mike O’Brien and worked on the transportation budget.)

This entry was posted in news and tagged 2020 budget, city council, duwamish tribe, i-976, seattle neighborhood greenways. Bookmark the permalink.

14 Responses to Council passes budget with vital South Seattle investments, leaves I-976 cuts for later if they lose in court — UPDATE: Injunction granted!