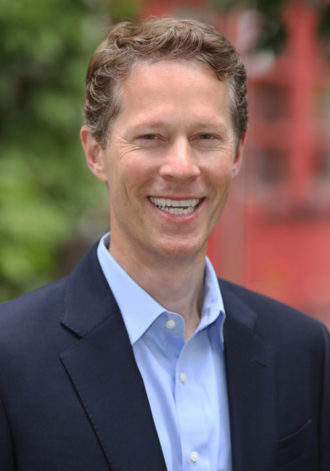 I sat down with Pedersen at Irwin’s Cafe in District 4 to talk about his vision for the committee and how he plans to build bridges to folks like Seattle Bike Blog readers and transportation advocates who may have supported his opponent during the 2019 campaign.

“I am really excited now as Councilmember to let my actions speak for themselves,” he said. “I will be doing a lot of things in favor of transit and environmental policies.”

An early win he hopes will bring people together is an environmentally-focused idea Seattle Neighborhood Greenways Founder and 2019 District 4 primary candidate Cathy Tuttle has proposed: Require all proposed city legislation to include a memo about it’s impact on the environment.

“Not only how would it impact emissions, but would it allow us to adapt?” he said, describing the intent of the proposed rule. And no, we’re not talking about “environmental impact” the way Washington’s State Environmental Policy Act (“SEPA”) does, which considers things like slowing car movement as an environmental negative. This memo would focus on the actual environment, meaning “carbon and climate resiliency,” he said.

Currently, all Council and Mayoral resolutions and ordinances are required to include a “fiscal note” outlining what impact if any the legislation would have on the city budget. The environmental note would do the same. Both notes are merely informative. They shouldn’t be something that delays projects or adds red tape, and they aren’t considered part of the legislation itself. They are just memos to Council to help inform their decisions. The idea is that every decision the city makes should have the environment in mind.

And perhaps safe streets advocates can also look at Pedersen’s decision to prioritize one of Tuttle’s ideas and “enact her vision” as something of an olive branch. We’ll see soon enough when the exact language comes out whether it gathers support from transportation and environmental advocates or not. Pedersen said he hopes to have it ready to go by Valentine’s Day “because we love our planet,” he said, laughing at how cheesy that sounds.

His biggest transportation challenge this year is almost certainly going to be the need to renew Seattle’s Transportation Benefit District (“TBD”), which mostly funds transit service and pothole repairs. Voters need to approve a replacement for the current measure, which relies heavily on vehicle license fees. But we don’t know yet how the courts will decide I-976, the voter-approved statewide initiative that would reduce car tabs to a maximum of $30. And we likely will not know the court’s decision by the time ballot language is due in order to make it onto the August primary or November general election ballots. In fact, we may not even know the courts’ decisions until after people vote. That makes Pedersen’s job pretty difficult.

“Getting it before voters to renew it is a priority for me this year,” he said.

So what will the renewal look like? In 2014, King County proposed a Transportation Benefit District to fund Metro service during a spring special election, but it failed. Seattle then put together a TBD to at least save and expand Seattle’s bus service while service elsewhere in the county faced cuts. Seattle’s measure passed by a very wide margin and included a $60 per year vehicle license fee. That measure expires at the end of this year, so the county and the city need to figure out first whether they are going to team up on a replacement.

“Seattle only might make sense for this renewal,” said Pedersen. Though little is certain about this measure yet.

Pedersen is hopeful that the case against I-976 will be successful.

“I think we have a really good case,” he said, though he lamented that the decision likely won’t come soon enough. “It’s unfortunate that the courts will probably not decide until after November.” He said he is working with the city’s legal team to figure out what kind of working is possible. For example, could they put forward a measure that says A will happen if I-976 is struck down, and B will happen if I-976 is upheld? It’s not yet clear whether that would pass legal muster or if voters would even approve something so potentially confusing.

I asked whether he would consider going even bigger on the TBD this year.

“It depends on the funding source,” he said. “I favor the car tab source. I think with sales tax we have to be careful. That’s regressive on things people need for their daily lives.”

And he knows he is going to need wide support for the measure to be successful again.

“I look forward to working with different organizations in Seattle that support transit,” he said.

If the city or county aim to have the measure on the August primary ballot, the language will need to be finalized by early spring. If it goes to the general election ballot, they have until summer.

Pedersen also thinks he can bring along people who might otherwise be skeptical of a large ballot measure. After all, one of the biggest sources of opposition to his candidacy — and a major reason so many transit, walking and biking groups supported his opponent — was his previous opposition to the 2015 Move Seattle Levy and the 2016 Sound Transit 3 ballot measures. He wrote against these votes in his since-deleted blog “4 to Explore,” which also gives you an idea of how long Pedersen was working to plan his Council run.

“That was me blogging about something, and now I have an extra responsibility of being a Councilmember chairing a committee that has half the city budget in it,” he said. “I think it will help the voting public to hear from somebody like me that this is a good idea.” When I asked him what he meant by “somebody like me,” he said somebody who has a “fiscally responsible approach to ballot measures.”

He said he supports transit and even lived car-free for a while. But his opposition to those measures was due to how they were funded, including sales taxes. He mentioned the need for more corporate taxes in addition to supporting car tabs.

OK, so what about bike lanes? Pedersen said he supports a connected bike network, though he is less supportive of bike lanes on arterial streets when a neighborhood greenway might work instead. So I asked him the dreaded bike lane question in his District: What does he think now about the way 35th Ave NE turned out.

“I think it was better than what was originally proposed,” he said of the city’s plans that included bike lanes. “I supported the mayor’s decision.”

Going forward, he said his priority is “making sure there is genuine, authentic community engagement” around projects. “And sometimes a greenway might work better than putting it on the arterial.”

But he’s not against all bike lanes in his district. For example, he recently went along 15th Ave NE doorbelling people’s houses to inform them about SDOT’s plans to add bike lanes for the street during an upcoming paving project.

“I want to avoid and learn from the debacle that was 35th Ave,” he said. “So far, the 15th Ave project seems like a very prudent investment … It helps with Safe Routes to School and the first/last mile because it connects to Roosevelt Station.” Perhaps bike advocates could take this support as another olive branch.

But the biggest upcoming bike lane project in District 4 is Eastlake Ave, one of the most-desired bike connections in the whole city. Connecting the University Bridge to South Lake Union, Eastlake Ave is the only viable bike route option along the east side of Lake Union. It will also someday connect to the 520 Trail once the state completes the new bridge across Portage Bay between I-5 and Montlake. The city’s designs for an Eastlake Ave redesign are part of the larger Rapidride J project connecting Roosevelt to downtown (stay tuned for an update on this project).

“I’m still listening to those who would be impacted by the changes,” he said of Eastlake. “How do we balance everything? The desire to have that additional safety for people trying bike through there and to there, how do we balance that with the impacts to small businesses and residents who live there?”

He suggested that “greenways could work for part of it.” I asked him if he had seen SDOT’s extensive bike route analysis for Eastlake, which included nine different options many of which included greenways. He said he had seen it, but that it “seemed very subjective.”

So no, Pedersen is probably not going to be the dreamy, wide-smiling, bike-commuting safe streets champion that former Councilmember and Transportation Committee Chair Mike O’Brien was. Advocates are going to need to adjust their strategies since they can no longer assume the Transportation Chair is already on their side (or, in some cases, a few steps ahead of them).

But Pedersen won, and the 2019 campaign is over. On top of that, the rest of the Council selected him as Chair of Transportation. As Councilmember, he says he wants to prove through his actions that he supports transit and environmental policy. So my advice to advocates who opposed him during the campaign is to give him space to at least support your issues if not be a champion. He’ll be in office at least four years, and could very well be Transportation Chair that long. Eight out of the nine City Councilmembers were endorsed by transportation advocacy groups, so votes should hopefully be in favor of transit and safe streets whenever they come up.

Pedersen, like any elected official, only has so much bandwidth. Even if he disagrees with a bike advocacy priority, like complete Eastlake bike lanes, that’s largely irrelevant if he chooses not to spend his resources on such a fight. Because Eastlake has such strong support from so many people who bike, trying to stop that project would be an enormous fight. And he would be fighting the very same people he will need to staff phone banks and knock on doors to support the Transportation Benefit District measure that he has made a priority in his first year.

So if you are skeptical of him, I say take him at his word and let him show you where he stands now that he’s elected. I’m not saying to give him a bunch of free passes. Stay engaged and active, but give him the chance to support your issues. Look for chances to be useful to each other so that maybe he chooses to spend his resources on causes other than fighting bike lanes. The worst case here for both Councilmember Pedersen and safe streets and transit advocates would be to become enemies and spend the next four years fighting over every little thing. There’s too much important work to get done.

This entry was posted in news and tagged alex pedersen, transportation committee. Bookmark the permalink.