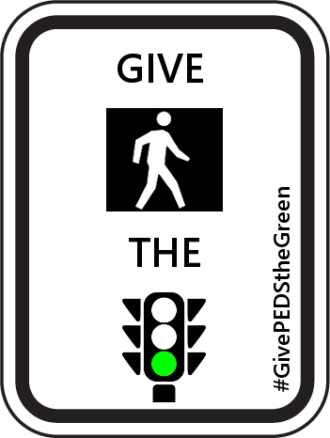 A new petition under the hashtag #GivePedsTheGreen is calling on SDOT to make an essentially invisible and low-budget change to traffic signals that could have a big impact on walkability, safety and accessibility in all corners of Seattle. It wouldn’t require any new infrastructure at all, and people driving would likely not even notice the change.

The idea is to program traffic signals in urban villages, the urban center and other areas with many people on foot so the walk signal is never skipped. Instead, just make the program behave as though someone pushed the button every cycle. It’s a pretty simple idea that could pack a big safety benefit.

The campaign was started by Troy Heerwagen, who has written for years at his blog Walking in Seattle. He wrote a post for the Urbanist Thursday explaining the idea and urging people to support the petition. He also says to always push the button when walking so SDOT has proper counts of how many people are trying to cross the street and can adjust signals accordingly.

I can’t possibly support this idea enough. So many safe streets projects require tough trade-offs or big capital budgets, but this one doesn’t. It’s a simple tweak, but it would improve comfort, efficiency, safety and accessibility for people walking around town. 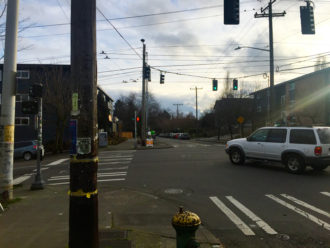 Looking across E Union Street from the northeast corner at 18th Ave. The signal is green for people driving, but the walk signal never appeared because nobody pushed the button.

Sitting outside Tougo Coffee last summer, I saw a man with a vision-impairment and a white cane walk past my table on the sidewalk while I typed away writing this blog.

I focused on work for a few more minutes before sitting up and taking a sip of my coffee. That’s when I saw the man standing at the northeast corner of 18th and Union a half-block away feeling around a wooden telephone pole for a button to push so he could trigger the walk signal and cross the somewhat busy Union St. Had he been trying to get across the street the entire time I was working?

As a sighted person, I was able to identify the problem: The push button wasn’t on the telephone pole. He figured this out and felt around for a different pole, this one a large metal pole that supports the bus trolley wires. But this pole didn’t have a button either. When he turned back to try the wooden pole again, I got up and went to help. Before I could get there, though, someone driving pulled over, got out of his car and helped guide the man to the bus stop on the opposite corner.

That’s when I realized that the whole time he was searching for the button (it was on a third smaller pole closer to the intersection), the traffic signal had been going through its regular cycles for people driving but kept skipping the walk signal, which “chirps” to tell people with vision impairments which direction has the walk.

This intersection is one of the many, many intersections in the city where the walk signal will only be shown if someone pushes a button commonly (and perfectly) called a “beg button.” By skipping the walk signal, traffic engineers are able to add a few seconds to green lights, thus maximizing vehicle throughput.

But the cost of those extra seconds falls on people walking, who are inconvenienced at best and put at increased health risk at worst.

The man with the vision impairment I saw is a particularly egregious case showing how these buttons can cause some community members serious problems just because they can’t see which of the nearby poles has a button. But as I sat back down with my coffee fuming at how insensitively this cold and distant traffic signal program had just treated this man, I began to notice that sighted and able-bodied people were also being put in unfair and potentially dangerous situations.

Over and over, people arrived at the corner and either didn’t notice the button or didn’t push it early enough to get the walk. Once they realized that the light was green and they were getting skipped, they had two choices: Wait another minute or so for the cycle to come back around (which makes walking take longer than it should, decreasing the appeal) or make a run for the other side, hoping to get to there before traffic on Union got the green.

Predictably, most people who were physically able ran for it. Because of course they did. It’s “their turn,” or at least it should be.

We all know this feeling because it happens all the time all over the city. But it doesn’t need to be this way. It forces people to make a quick, tough decision between two unappealing options. And if they try to cross too late, the results could be tragic.

It more dangerous to cross without a walk signal because the blinking “don’t walk” signal gives people much more warning than a yellow light. It’s also illegal, which could result in tickets and unnecessary traffic stops. People can also potentially be held liable if they are injured or killed because they were crossing against the walk signal.

How many times have you seen a news story about someone hurt or killed walking across the street against the signal? It’s pretty hard to measure how many of those cases were people running for it after getting skipped (reports rarely go into such detail), but certainly some of them were.

With so many negatives piling up, I decided to hang around and time the signal to see how much extra green light time Union was getting in exchange for inconveniencing and endangering people walking. When 18th Ave received a green light without a walk signal, Union St traffic had a red light for 23 seconds. When the walk signal was triggered, Union had a red light for 26 seconds.

Three seconds. That’s all. If SDOT came out and changed the programming of this signal so the walk appeared every cycle, nobody driving would even notice the change. But people walking would never be skipped again.

This is just one intersection, and it’s not even a particularly notable example. But the same frustrating problem is playing out all over the city all day long every day, and SDOT can change it.

It wouldn’t even require extensive retiming work, which can be complicated and expensive. These signals already have walk times programmed, SDOT just needs to treat every cycle as though someone had pushed the button.

To be clear, the petition is not calling for the city to get rid of the buttons, which can serve important accessibility functions apart from triggering lights (like broadcasting audio alerts to help people with vision impairments).

And as with every rule, there are exceptions. There are some signals that only serve crosswalks and only turn red when someone pushes the button (for example, on Fremont Ave near B.F. Day Elementary). Those may be fine the way they are. A button that triggers the walk more quickly may also be a fine use. There may even be some intersections with very low numbers of people walking where someone could make the case that the “beg” requirement is not egregious (I’m not totally convinced of this, but areas with lots of people walking are definitely a higher priority). 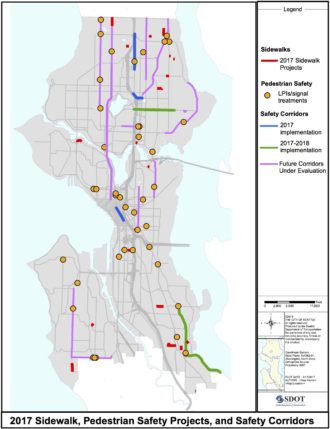 This petition’s proposal also pairs well with the Mayor’s recently-announced plans to make more significant walk signal improvements at a bunch of intersections across the city. Called “leading pedestrian intervals” in the traffic engineering world, the retimed signals would give people walking a couple seconds of head start before the green light. This allows people to get fully established in the crosswalk before people try to make turns, improving their visibility and preventing dangerous situations where people try to squeeze through ahead of people crossing. We will have more on that in a future post, so stay tuned.

Here are three ways Heerwagen says you can help with the #GivePedsTheGreen campaign:

This entry was posted in news and tagged #GivePedsTheGreen, sdot, Troy Heerwagen. Bookmark the permalink.