People using the Westlake Bikeway can now, finally, get to and through South Lake Union via a mostly uninterrupted route of bike lanes.

It’s not the most direct route, and the connection into downtown is still incomplete. But for an interim solution, wow, it’s a lot better. And as a video by Seattle Neighborhood Greenways’ Tim Fliss shows, the bike lanes are getting a lot of use even though they aren’t fully complete yet:

Huge amounts of development activity along the street have delayed the opening of a complete 9th Ave bike lane, which is scheduled for completion in 2018. So the city installed a new protected bike lane connection to Dexter Ave, which connects into downtown via 7th Ave.

Until now, people heading south in the Westlake Bikeway reached Lake Union Park, then were just sort of dropped from the bike network to figure out the rest on their own. For most people, this meant either mixing with backed-up traffic on 9th Ave or mixing with the bike-wheel-grabbing streetcar tracks on Westlake Ave. Both of these options were awful, effectively stranding the south end of this major new bike investment.

The new connection (which was not yet finished as of my recent visit) will guide people diagonally across the intersection at 9th and Westlake into a new protected bike lane: 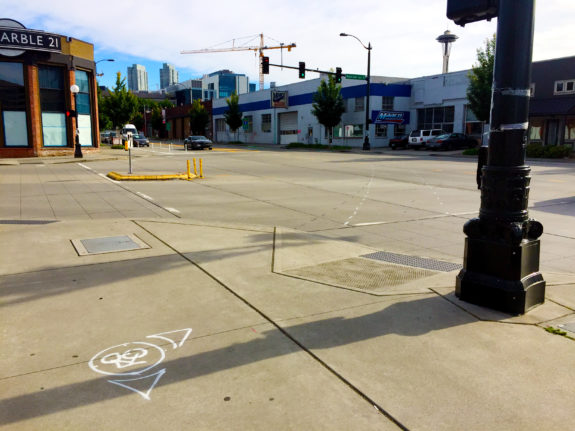 This connection requires mixing with people walking on the sidewalk, which is not ideal. But at least it works. 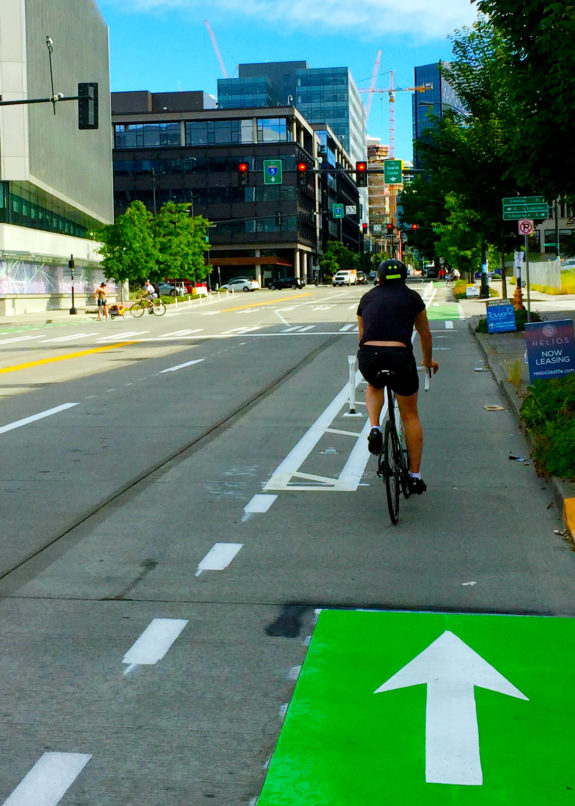 Once on 9th, people biking have a clear path to get around backed up traffic that can’t move due to backed-up traffic on Mercer Street. My photos were taken on a Sunday, so there is little traffic shown. The video above is a more typical look at the problem.

This bike lane has created a way for people to keep moving in this increasingly congested area. Spending millions on fancy traffic signals can’t fix the problem of too many people trying to drive on Mercer Street. But slapping some paint and plastic posts on the ground can create a real transportation option overnight. And it works.

The 9th Ave bike lanes continue to Mercer Street, and people who want to continue into South Lake Union via 9th Ave can do so on the existing paint-only bike lanes. But the next year or so will see a lot of bike lane closures and disruptions on 9th, so many people may want to turn right on Roy Street toward Dexter Ave instead (though Dexter will continue having its own construction disruptions). 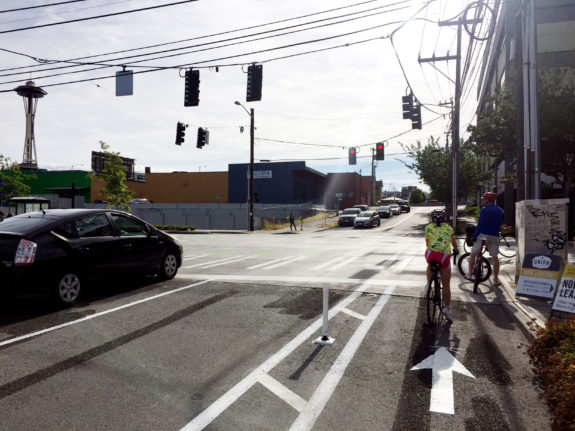 Roy now has new protected bike lanes for the short stretch to Dexter, which has also received some more plastic posts. The route from Westlake to Dexter works very well, but the left turn onto Dexter to head downtown needs some help.

Right now, people in the Roy Street bike lane are expected to wait for the green light, then cross the street and stop in a small two-stage turn box. Then when Dexter gets the green light, they can head south. The problem is that this is a major bike route, and if many people try to use this Dexter connection they simply won’t fit in the little green box. An all-way walk/bike phase would help move more people if that becomes an issue.

Many people will also continue using the sidewalk and crosswalks on Mercer to get from 9th to Dexter, which isn’t a terrible option. But until 9th Ave is complete, people are going to need to find a way to weave around or mix with traffic for stretches. 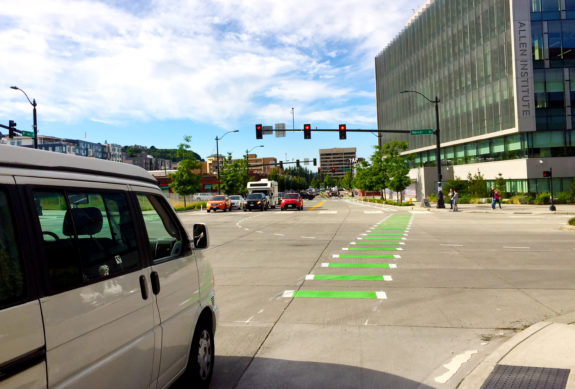 Crossing Mercer at 9th Ave remains awful, though the new protected bike lanes at least make it easier to make your way past the snarled traffic to get to the intersection. But while the green paint is clear in these photos (again, this was a Sunday), it will often be blocked by all the backed-up traffic headed to I-5. Mercer is just a miserable, car-focused street that doesn’t work for anyone. The best the city can do is to try to provide non-driving options for people to get around, and these new bike lanes are a good start. 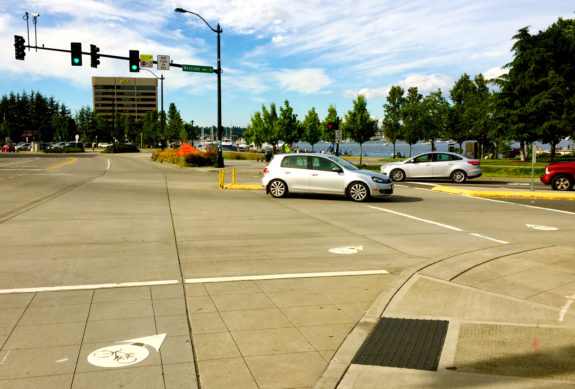 Heading north to the Westlake Bikeway, the final crossing at 9th and Westlake still needs help. The new bike lane makes it way easier to get to the signal, but an awkwardly-placed concrete island and poorly-designed signals make getting to Lake Union Park and the bikeway a bit confusing. Bike dots lead people biking to use the crosswalk, but as you can see in the photo, the walk signal does not show unless you waddle onto the sidewalk and push the beg button.

This is an obvious case for #GivePedsTheGreen. The walk signal should appear every signal cycle whether someone pushes the button or not. And it’s much easier and cheaper to simply trigger the walk signal automatically than it is to install a new button next to the bike lane. This is a major crossing between a dense neighborhood to a major park. This signal should never have been programmed to require a button push in the first place.