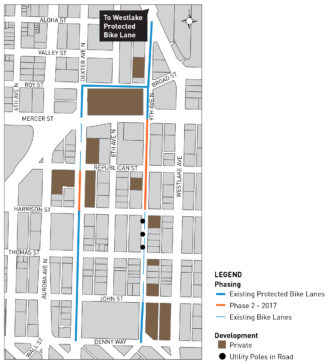 We are two blocks closer to a complete connection between downtown and the Westlake Bikeway.

SDOT installed Phase II of their three-phase rollout of protected bike lanes on 9th Ave N in South Lake Union this week. The bike lanes now extend as far south as Harrison Street, where they transition into the existing painted bike lanes that continue (mostly) to Denny Way and up Bell Street to 8th Ave.

9th Ave N used to be a rather sleepy street, making it a decent bike route alternative to Westlake Ave N, which was ruined for cycling when the South Lake Union Streetcar was constructed a decade ago. But as construction has boomed in recent years, the street has become busier and busier. Cars picking up and dropping off are constantly blocking the feeble paint-only bikes lanes. And the crossing at Mercer Street has ceased to function effectively or safely due to a crush load of cars.

The new bike lanes dramatically help with the blocked bike lane problem by placing the bike lane against the curb and creating space for parking and loading between the bike lane and the general travel lanes. And with each new block, the connection to the incredibly popular Westlake Bikeway reaches more homes and workplaces.

Timothy Fliss shot this quick video on day one showing that people immediately adapted to the new lanes:

The lanes aren’t perfect, though. As soon as they were opened, people started asking why one block still had people parking cars cross the bike lane. @jawshv on Twitter illustrated the issue well:

2. Looks good @seattledot ! Feels very safe with the door zone buffer. Lets take a peek at the next block… pic.twitter.com/2L45KRHRzT

But in an awesome show of public response by SDOT, staff took another look at the design and decided that block should be changed. So they are going to do that “this season,” SDOT Director of Project Development Darby Watson told Seattle Bike Blog:

Staff completed the review yesterday and concluded that the design that was implemented is based on an older concept from early last year, and our standards have evolved since then. We are planning to convert this block to a floating parking protected bike lane, similar to the rest of the corridor, this season.

Some folks on social media are ragging on SDOT for not getting this right on the first try, but I think that criticism is a bit misplaced. I mean, obviously it would be better if they did it perfectly on the first try. But they responded quickly by reassessing and making plans to change it. That’s a good thing. It’s also a good example of why using paint and posts to create bike lanes is a good way to trial designs. They can learn from the real world application of a design and make changes as needed.

The newest extension did not, however, do anything to fix the biggest challenge of the entire 9th Ave bike lane: Crossing Mercer Street.

For many hours of the day (and essentially guaranteed during rush hour), people turning left from southbound 9th Ave to eastbound Mercer Street block the bike lanes, travel lanes and crosswalks at 9th Ave. It’s a serious problem for accessibility in the crosswalk, for bike safety and for traffic flow. SDOT’s multi-million-dollar adaptive signal timing program did nothing to solve the issue. SDOT needs to look at more solutions. The status quo is just too dangerous to continue.

Ultimately, the problem is that there are just too many cars. People trying to drive to I-5 fill the recently-widened Mercer Street’s three lanes and back up to the intersection. So when people try to turn left from 9th to Mercer, they get stuck out in the intersection because their cars and trucks don’t fit. Traffic usually stays at a standstill for the whole signal cycle, so when the light turns green for people headed north on 9th, the path is still blocked.

One possible option could be to give people heading north and south a green light before allowing the left turns. That way people queued in the bike lane or in the crosswalk could get across before left-turning cars block the way. This still wouldn’t solve blockages that happen when cars headed eastbound on Mercer block the way. But as you can see in the tweets below, the left-turning cars are the biggest problem.

The city could also ban right turns from northbound 9th Ave to eastbound Mercer Street. This would both protect people biking from turning conflicts and would prevent right turns from filling space that could otherwise be filled by the left-turning cars. Of course, this change could just lead to more right-turning traffic on other crunched streets, like Westlake.

Without reducing the number of cars, there’s just no easy answer. That’s why the city needs to do everything it can to keep biking, walking and transit pathways open. Constant blockages of the bike lane and crosswalks on 9th Ave are working against the comfort of people trying to choose a non-driving way to get around. If walking and biking routes were open and free-flowing, more people would choose to get around that way.

An entire bike route is only as comfortable to use as its least-comfortable spot. So at least north of Harrison, crossing Mercer is the weakest link holding back the rest of the route.

If you have ideas for fixing this intersection, let us know in the comments below. We need both big ideas and quick-and-easy fixes.

Twitter user @envy_screams started posting photos of this intersection early in the summer, and pulling the photos together gives you an idea of how persistent and serious this issue is for the usability of this bike lane:

I was making my way around/through the cars blocking the intersection (northbound on 9th). He was making a left from Mercer to 9th…

@SeattlePD Please do something about enforcement here, or someone is going to get hurt.