Seattle’s bicycle movement emerged from chrysalis Tuesday transformed into its newest state, and it put on a powerful display inside City Hall.

I highly recommend watching the testimony and the very interesting Committee conversation, during which Councilmembers Mike O’Brien, Rob Johnson and Kshama Sawant all had powerful things to say in support of the bike plan and safe streets. Councilmember Teresa Mosqueda is not a member of the Transportation Committee, but she was active during the rally before the meeting.

I’ve been covering the bike movement in this town long enough to observe how the popular, grassroots energy behind the idea of a safer and more bikeable city is always evolving to meet the needs of the day. New people get engaged and emerge as leaders, people who have been engaged for a while level up and become stronger advocates, and some people grow cynical, burn out or move away, leaving voids that are not always filled. But despite setbacks here and there, the movement continues to grow stronger and more intersectional, connecting safe streets, bike lanes and transit with housing, public health, environmental justice and social justice.

The bike movement in this town, like so many other movements, has been a very uneasy place in recent years. A lot of the volunteer energy behind it shifted after Donald Trump got elected, as it should have. In my experience, people who believe everyone has a right to safely move around on our streets also tend to believe that everyone has a right to safely live in our nation.

But that doesn’t mean people stopped caring about safe streets, as was clear Tuesday at City Hall.

And it feels like the movement finally found its footing after a few years of being unsure how best to advocate under Mayor Jenny Durkan, whose 35th Ave NE decision finally showed people her true intentions as executor of Seattle’s bike plan.

People who hate bike lanes like to say that there’s a shadowy and nefarious bicycle lobby running City Hall because that imaginary villain is easier to fight than a popular movement of their neighbors who will never accept the status quo on our streets where nearly every inch of space is given to cars and people’s loved ones are seriously injured or killed as a direct result. In reality, the bike movement’s power comes from the grassroots. And if the mayor thought cancelling bike lanes was going to be the “safe” political choice, I hope she’s changing her mind now.

Because I would much rather spend the rest of her time in office building the bike network and celebrating successes rather than constantly fighting and rallying to save scraps she hasn’t yet cut. 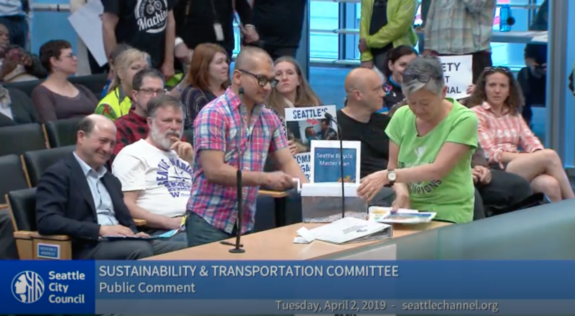 Rather than just delivering words, Tamara Schmautz and Apu Mishra brought a hand-cranked paper shredder to the podium and proceeded to shred the cover sheets to the Bicycle Master Plan, Vision Zero Plan and Climate Action Plan (39:10 in the video above). The people of Seattle believe in the goals established in these plans, which were developed after an enormous amount of public outreach and input. The work to complete them will be difficult. There will be people fighting against them just about every step of the way. Hopefully the mayor can also see that there will also be a lot of people who have her back when she makes these tough decisions. Because the goals in these plans are urgent, and we don’t have time to waste waiting for the next mayoral election.

Restoring the 35th Ave NE bike lanes could be a good start. But even if she never wants to open that hellmouth again, she could announce a strong proposal of equal or better scale and impact, and that she will work to fill any funding gaps because it’s important the 35th Ave NE decision (which shared costs with the paving project) doesn’t set back progress on the Bike Master Plan. I’m not talking about some enhancements to the existing 39th Ave NE neighborhood greenway. I’m talking about 2 miles of protected bike lane that fills an important bike network gap. Something like Beacon Ave S or Rainier Ave S or 12th Ave between Yesler Way and Beacon Hill, all projects recently removed from the implementation plan that were high priorities for Seattle Bicycle Advisory Board.

It would also be helpful to hear her restate the city’s intention to build bike facilities when the costs can be shared with paving projects, such as on NE/N 40th Street, where bike lanes were recently removed from paving plans. If costs are a major limiter to building the bike plan, as SDOT has stated in this implementation plan update, then surely cutting the lowest-cost bike lanes makes no sense. Certainly, there will be people who don’t like these bike lane plans. But if she doesn’t stand behind the city’s policies, then she will flounder. Does she really want every single decision she has to make become a competition for who can yell at her the loudest? That sure doesn’t sound like fun to me, and it definitely sounds like a terrible way to lead a city. But that’s the precedent she is setting with the 35th Ave NE decision.

I was proud to join community members, safe streets advocates, and @CMMikeOBrien today in support of delivering on Seattle’s promised investments in our bike network to ensure that we have equitable, safe bikeways that connect communities across Seattle. pic.twitter.com/0EsMiLDIMG

This decision was political. How can anyone have confidence that the bike plan which was carefully created after many months, if not years, of community involvement will be implemented.

Note that former Councilmember Tom Rasmussen was the Transportation Committee Chair during the creation of the Bicycle Master Plan.

When Seattle refuses to slow cars or remove parking, we aren't able to travel safely. As #disabled people, we are here say that being able to bike safety is a #disability issue. We will stand w biking, walking, rolling & transit advocates to fight for a city that works for us all

Founder and Editor of Seattle Bike Blog.
View all posts by Tom Fucoloro →
This entry was posted in news and tagged city council, transportation committee. Bookmark the permalink.