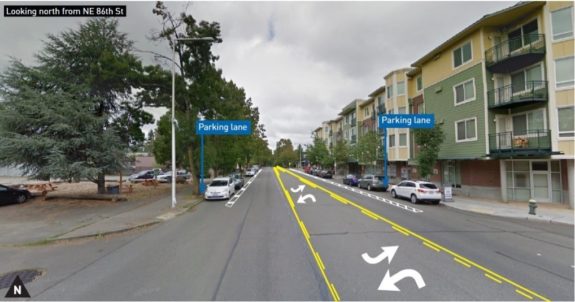 Mayor Jenny Durkan’s vision for the future of Seattle streets is to reserve 100 percent of the street space for cars.

Mayor Jenny Durkan has officially abandoned the Bicycle Master Plan, which was approved unanimously by the City Council and funded through a vote of the people.

The Mayor has until recently only delayed Bike Master Plan projects, like essentially all downtown bike lanes. But the time for wishy-washy stances on bike lane projects is running out, and her office is finally admitting that they do not plan to build bike lanes, at least not bike lanes that have any opposition. Which is predictably almost all of them.

The 35th Ave NE bike lane saga will go down as one of the most unnecessarily frustrating  public debates about bike lanes this city has seen, and the worst part is that the Mayor has now given people a template for how to cancel Bicycle Master Plan projects they don’t like. Get loud, make signs, feel free to get loose with the facts, and she’ll have your back even if you don’t really have a solid policy basis for your bike lane hatred.

The 35th Ave NE bike lanes are noted in the city’s Bicycle Master Plan as part of the priority-focus “citywide network.” SDOT will not build the bike lanes that were planned, designed and even sent to the contractor for construction. And they will not be replaced by a nearby facility (SDOT’s announcement makes a vague mention of “enhancements” to the existing 39th Ave NE neighborhood greenway, which is a steep eight-block round trip from 35th that does not function as an “alternative” or “parallel” bike route). Instead, they are just cancelled, and people in the neighborhood will not have a protected and comfortable way to access local businesses and destinations by bike. And there will now be a gap in the citywide bike network, which hurts bikeability for significant stretches of Northeast Seattle and Lake City.

The Mayor is simply wrong here. She is acting against the will of the people as represented though our elected City Council and the 2015 Move Seattle Levy vote. She is prioritizing car movement and gasoline burning over safety and car-free mobility options.

Deleting these bike lanes goes against our Council-approved transportation policies. Will the Council push back or cede this power to her? If they don’t, then what’s the point of crafting city policies and passing them through that arduous City Council process if the Mayor can just choose not to follow them? Unanimous City Council approval should mean something.

At the very least, Councilmembers and the Move Seattle Levy Oversight Committee should make sure that now that the bike lanes have been cancelled, all Bicycle Master Plan funding spent on this project is returned to the bike budget for use on bike projects, including the $14,000 spent on a failed mediation attempt. Otherwise, this sure seems like an improper use of voter-approved funds. Plus, using Bicycle Master Plan funds to cancel bike lanes is just cruel.

And now that the Mayor has officially revealed her bike lane opposition, how do safe streets supporters respond? It’s a tough spot because Seattle has the necessary plans, policies and funding already on the books, the city just has a Mayor who refuses to execute them. We don’t have the time to wait out her term because we need to make safety and climate progress now. People’s lives and our city’s future are at stake.

Founder and Editor of Seattle Bike Blog.
View all posts by Tom Fucoloro →
This entry was posted in news and tagged 35th Ave NE, jenny durkan. Bookmark the permalink.