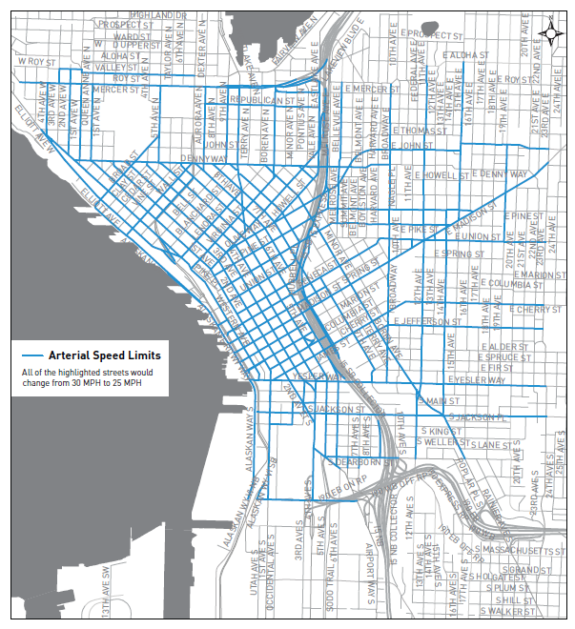 Did you feel it overnight? A strange feeling that even though the street outside your window looks the same as before, there’s something different about it?

OK, probably not. But something did happen: The speed limit was lowered by five miles per hour.

Proposed by SDOT’s Vision Zero team at the urging of safe streets advocates (props especially to Seattle Neighborhood Greenways’ Gordon Padelford) and passed unanimously by the City Council, Seattle has lowered default speed limits across the whole city. All minor “non-arterial” (typically residential) streets now have a 20 mph limit. All busier “arterial” streets have a limit of 25 mph unless otherwise noted.

Because most arterial streets outside of downtown and some nearby central neighborhoods have their own set speed limits (usually 30, though sometimes 35 or higher), this change only affects those streets noted on the map above.

But these central Seattle streets are in areas with very high numbers of people walking and biking. Since speed is among the biggest factors in how serious someone is injured in a collision (or whether that collision happens at all), this speed limit change is an important step towards keeping our city’s residents healthy and safe.

Of course, simply changing a handful of signs at the city limits is not going to change people’s driving behavior overnight. The speed limit changes need to come with physical safer street designs that make driving the safer speed limit feel more natural and comfortable.

The good news is that the city’s Vision Zero team knows how to do this. Their safety record is very impressive when they get the green light to take action. They need the political leadership in the Mayor’s Office and the budget leadership on the City Council to really go out and work their (very scientific and carefully studied) safe streets magic on more streets more quickly.

The City Council will have opportunities to increase and prioritize safe streets funding when they restart budget deliberations after the election. There’s so much work still to do.

14 Responses to Today, Seattle speed limits dropped to 25 downtown, 20 on every minor street