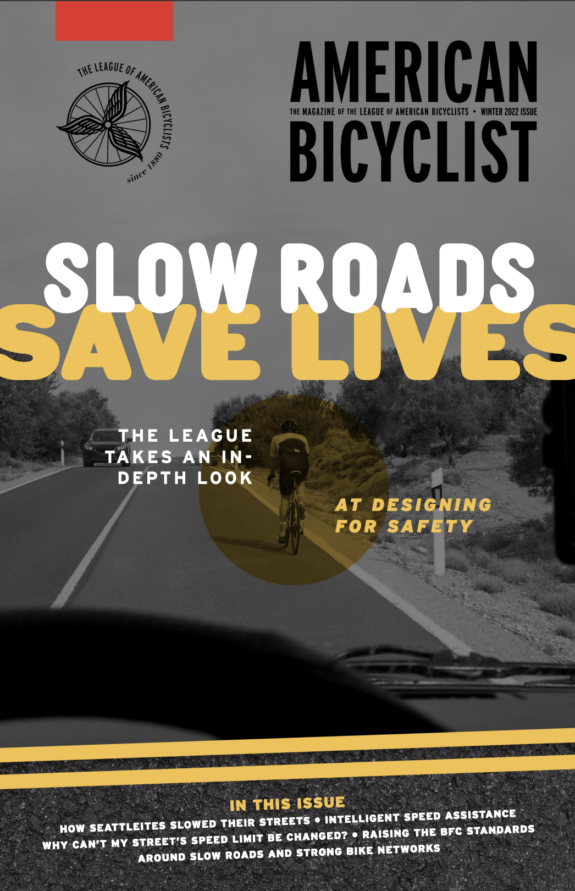 The interview is from the Winter 2022 issue of American Bicyclist Magazine.

The League of American Bicyclists interviewed two wonderful friends of the blog for a story about how safe streets advocates won slower speed limits in Seattle. Brie Gyncild, who you may remember from this Pike Street bike lanes video, and Merlin Rainwater, the creator of Senior Ladies on Wheels, spoke about the community work it took to get the city to lower most arterial speed limits to 25 mph and most residential speed limits to 20 mph. They also noted that just changing the limit isn’t enough. The design of the road must change.

The interview is part of a magazine feature all about what makes a street safer. From the Bike League:

Ask Merlin Rainwater and Brie Gyncild how and when the fight for slower streets started and you’ll learn about the people lost and injured — and the memorial rides and walks the advocates led for each of them.

“I think that initiative was critical because it made the issue of speed one of life and death,” Merlin said. “Traffic violence is an invisible scourge. It’s truly taken for granted that people are going to die in traffic and there’s nothing we can do about it.”

The memorial walks and rides, they said, made the issue of traffic safety about more than just the safety of people inside cars. Using the stories of individuals galvanized support for taking big steps like lowering the speed limit throughout the city. For Brie, lower speed limits were another step towards turning the streets into “places people exist in rather than places people pass through.” When she learned that every city council member was on the record in support of lowering speed limits in Cascade Bicycle Club’s candidate survey, she saw an opportunity to lead a movement for change.

In 2016, a coalition of groups mobilized by Seattle Neighborhood Greenways secured their first major win: the city council and mayor unanimously approved a measure designating all non-arterial streets with speed limits of 20 miles per hour, while arterials — unless otherwise posted — were set to 25 miles per hour. Lowering residential speed limits to 20 mph was a big win, but there was and is still much work ahead.

“We all know that just changing what the sign on the street says doesn’t actually change behavior,” Brie said. As part of their ongoing advocacy, Seattle Neighborhood Greenways focused on the need to not only put up a new sign, but also to redesign the streets to limit driver speeds.