Watch: The new Pike Street bike lanes are just a glimpse into the community-led vision for Pike/Pine

There’s something very different about the new protected bike lanes on Pike Street on Capitol Hill: Community groups led the process every step of the way. When former mayor Ed Murray slammed the brakes on the Center City Bike Network in 2016, which included bike lanes on Pike and/or Pine streets between downtown and Broadway, the volunteers at Central Seattle Greenways were not going to just allow progress on the lanes to wallow.

Pike and Pine Streets connect the city’s densest employment, transit and destination center with some of the city’s most densely-populated neighborhoods, and the streets are lined with popular businesses. And though they are hilly, Pike and Pine are by far the least steep options available. So the potential on these streets is huge.

The city just competed new bike lanes on Pike Street between 9th Ave and Broadway, that latter of which has a protected bike lane already. There is still a very tough gap between 6th and 9th Avenues, so effectiveness of the lanes will be held back until that is completed. But the sections that have been finished demonstrate the potential of safe and comfortable bike lanes in this corridor, and that’s exactly why community members have been working so hard to make sure they become reality. 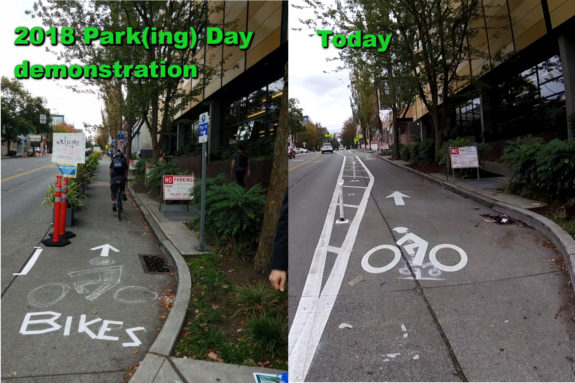 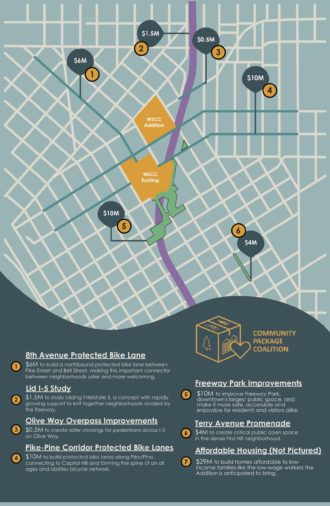 As soon as progress shut down in 2016, they took action. Volunteers with Central Seattle Greenways started in 2017 by going door-to-door to talk to local businesses along both streets about bike lanes and safe streets. Then they did it again in 2018, inviting business owners are other community members to a large community workshop to talk about potential concepts. They also conducted an online survey (UPDATE: Check our the results of all this outreach in this report).

“We knew that this is an incredibly important corridor to a lot of different people in the community, not just people who bike, obviously,” said Brie Gyncild, co-leader of Central Seattle Greenways. “We wanted to make sure especially with the businesses that their needs were met from the beginning. We wanted to make sure that when we were advocating for specific design, we were actually understanding the community’s priorities.”

They even worked to secure $10 million in funding for a more significant and permanent long-term remake of the streets in the future by joining other community groups to advocate for the “Community Package” of projects the Washington State Convention Center would need to fund as a public benefit in exchange for some public space vacations needed to build the project.

All told, I can’t think of a bike lane project that has been more community-led than this one. It’s definitely not possible for people to do this for every bike lane in the Bike Master Plan (there are only so many hours in a day). And, of course, there’s no guarantee at all that people won’t oppose a bike lane even if a group conducts this much outreach. But it definitely sets a new high water mark for what community-led bike lane outreach can look like.

“I think there’s tremendous value in community members doing outreach to other community members, right?” said Gyncild. “I think there’s tremendous value in the business community understanding that there is no bikes versus business story here, that we all want the businesses from these corridors to succeed and we all want people to be able to travel safely through them and to businesses using those corridors.”

2 Responses to Watch: The new Pike Street bike lanes are just a glimpse into the community-led vision for Pike/Pine