Daniel Ahrendt was biking westbound on Jackson Street in May 2015 when he crossed the very wide five-way intersection with Rainier, Boren and 14th Avenues. A bus was stopped next to the curb, so he changed lanes to pass. That’s when everything went horribly wrong. The track grabbed his bike wheel, sending him crashing to the ground. Then the bus pulled away from the curb and ran over him, crushing his pelvis and leg. He nearly died of blood loss, but medics and the trauma team at Harborview were able to save his life. He was hospitalized for a month.

That was May 2015, and he just recently settled with the city for $1.55 million. He no longer bikes and now lives in New York, the Seattle Times reports.

His crash was nightmarish, but it was also preventable. Before building the First Hill Streetcar line, it was already well known that streetcar tracks are dangerous for people biking because the gap is wide enough to grab all but the widest bicycle tires. And once your wheel starts to slip into the track, you don’t stand a chance. Seattle and Sound Transit learned lessons from the dangerous design of the South Lake Union streetcar, especially on Westlake. That’s why the First Hill Streetcar runs next to a protected bike lane on Broadway.

But they did not continue this protected bike lane for the rest of the route, including heavily-biked Jackson Street. This was a huge mistake, and people continue to get injured.

As is common in settlements like this, the city did not officially admit fault. But something needs to happen to improve safety along our streetcar routes, including Jackson Street, Yesler Way and in various parts of South Lake Union. And experience from around the world shows that the only complete solution is to have separated bike lanes that cross streetcar tracks at safe angles as close to 90 degrees as possible.

Seattle City Attorney Pete Holmes has a truly despicable quote in the Seattle Times, basically telling everyone who has been injured (or killed) after their bike wheels got caught in the streetcar tracks that it was their fault.

“The vast majority of cyclists in Seattle and around the world safely navigate streets that have embedded streetcar rails,” said a statement by City Attorney Pete Holmes’ office to the Seattle Times. “Without commenting on any particular accidents or cases, all users must follow the rules of the road and travel with awareness of street and traffic conditions around them.”

This is not only a heartless thing to say, it’s also inaccurate. People do crash on streetcar tracks all over the world. Here’s a story about a Sheffield, UK, streetcar project that should sound depressingly familiar, for example. A large study (PDF) by Sheffield found reports of bike crashes on tram tracks in the following cities, though the authors noted the problems were so widespread that every streetcar system has probably has these issues: 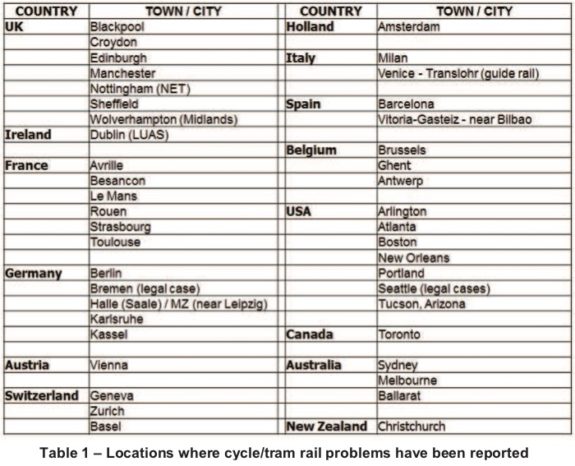 But there are reasons that the problem could be a bit worse here. For example, the flange gap in modern American streetcar tracks is slightly wider than many European tracks. When you’re talking about bicycle tires that barely fit into a gap, every tiny increase in the gap could be the difference between a tire getting caught or not. And some bike tires may be more or less likely to get caught depending on their width, making the hazard somewhat unpredictable.

There’s also a clear difference between legacy streetcar hazards and new ones. Streetcar tracks that have been part of a street for a long time can be problems that need fixing, but creating a new streetcar hazard is inexcusable. Implanting something in the roadway that grabs someone’s bicycle wheel when they ride over it is a huge danger. Here’s a video I shot in 2014, a year before Daniel’s crash, showing how dangerous this area is:

And even people who are aware of the danger of tracks can still fall victim to them either because they are avoiding something on the roadway (like, say, a bus) or because they slightly misjudge a turn when crossing the tracks (like Bob Edmiston did in this story).

The other problem with streetcar tracks is that there just is no easy way to retrofit tracks so they are safer. Efforts to fill the gaps with a rubber that can be compressed by streetcar wheels have not been successful. Track fillers tested in Zurich (you know, one of those places where people supposedly don’t crash on tracks) degraded quickly and even became hazardous on their own once worn out. And a (discontinued?) German product called VeloSTRAIL is designed for standard railroad tracks, not the embedded c-shaped tracks used in Seattle. I sure hope someone can invent a solution that can work, but it does not seem to exist yet.

Work is long overdue to fix Seattle’s bike/streetcar conflicts. It shouldn’t take a lawsuit to get the city to take action. And it definitely should not take another crash as bad or worse than Daniel’s, either.