The new Jackson Street isn’t safe, here’s a way to fix it

As we reported earlier this week, Daniel Ahrendt has a rough recovery ahead of him after crashing on Jackson Street in May and getting run over by a Metro bus.

Both he and a Metro bus were headed westbound on Jackson. The bus was stopped in the curb lane, so Ahrendt moved into the left lane to pass when he fell. The bus then moved forward and ran over him with the back wheels.

Though Seattle Police said the cause of the crash is still under investigation, Ahrendt’s lawyer said his wheel got caught in the streetcar tracks. Though not one passenger has yet taken a ride on the First Hill Streetcar, many people have already crashed on Jackson Street since the tracks were installed in early 2014.

While new street designs do take some time for people to adjust and get used to them, it’s been well over a year and people are still getting hurt. So we know that the Jackson Street design is not safe as is, and we definitely know the intersection at Jackson/Rainier/Boren/14th is confusing. So let’s start thinking about how the city can make this intersection and the whole Jackson corridor safer.

Here’s a look at the confusing sharrow guides in that intersection (I also put together this short video for the first-person perspective): 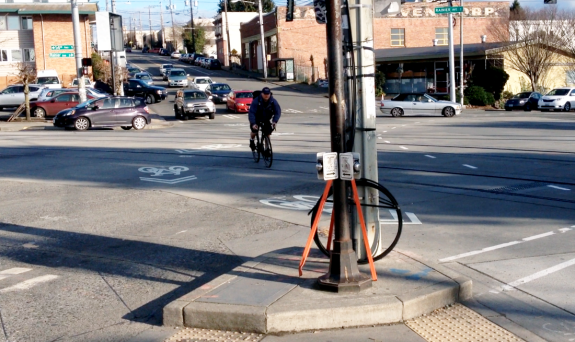 I’m gonna play a hardcore game of Armchair Traffic Engineer here. If you want to play along, here’s a link to the First Hill Streetcar design documents.

Due to the way the tracks turn onto 14th Ave S and the odd shape of the intersection, protected bike lanes may be the only complete solution to adequately address the challenges for biking. There are also opportunities to significantly reduce the crossing distances for people walking in the long crosswalks, especially helpful for people who move slowly due to health, age or ability issues.

I threw together the quick and rough GIF below showing how a “protected intersection” could possibly work. (Note: North points right in this map, which is from the final design documents for the First Hill Streetcar project)

Each leg would have bike signals, and car turning movements would need to be designed or limited to avoid conflicts.

The westbound bike lane would lead people on bikes across both sets of tracks in one safe movement, effectively making the crossing in two legs: One to cross 14th and one to cross Boren. While people would typically make the whole crossing in one signal cycle, it’s possible someone who starts late in the cycle would be stopped between 14th and Boren, so there would need to be a waiting space there.

The eastbound bike lane would be a little more straight forward since there is no conflict with the tracks. The wide turn from eastbound Jackson to Rainier creates an opportunity for a far-advanced stop line for bikes, and the barrier protecting the bike lane could also calm turning traffic. Today, people can really whip around that corner without slowing down, creating a dangerous situation, especially for people walking.

Connecting to the northbound 14th Ave S bike lane is similar. Today, it’s a bit confusing if you’re trying to turn into this lane from eastbound Jackson because the left lane — which can either turn left or go straight — has streetcar tracks.

This intersection would also work well with future bike lanes on Rainier Ave, which are noted in the Bike Master Plan.

But this design also fits well into a redo of Jackson that includes bike lanes for its length. This is not in the Bike Master Plan, but it should be. No other street avoids steep climbs up First Hill, crosses I-5 and crosses the train tracks between the International District and Pioneer Square.

So what would Jackson look like with bike lanes? I threw together the images below using Streetmix. Note that the buffer space protecting the bike lanes could also be used for crosswalk islands, making the mid-block crossings to the streetcar platforms much shorter and more comfortable.

One option for buses would be for Metro to acquire buses with doors on both sides for all routes that travel on Jackson. That way they can serve the new and wonderful streetcar platforms rather than curbside bus stops. Otherwise (or additionally), new bus islands would be needed between the bike lane and the general purpose/streetcar lane.

These designs also assume that the center lanes will not become transit-only, which is an option studied by the Center City Connector streetcar team. I suppose that’s something of an existential question for the city’s streetcar vision (the 1st Ave plans don’t include bike lanes, which seems like a recipe to repeat the problems we’re having on Jackson).

Vehicle volumes on Jackson are likely low enough to fit in these designs: 10,000 east of Rainier, 13,800 west of Rainier. To put that in perspective, the north section of Rainier Ave carries about 34,000 vehicles per day.

The primary concerns would be keeping buses on time and dealing with sports traffic. On the other hand, this project would make a whole lot easier to bike to the stadiums, which could help the traffic and parking problems in Pioneer Square and SODO during and following games.

40 Responses to The new Jackson Street isn’t safe, here’s a way to fix it