Can Westlake’s streetcar tracks ever be safe for people biking? 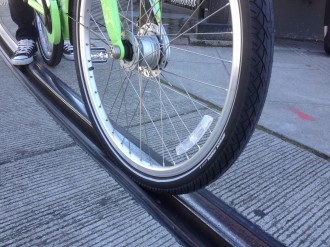 Fatter tires (like the ones on Pronto bikes) are less likely to get stuck in streetcar tracks. But tracks can still be dangerously slick when wet.

Seattle plans to speed up buses and the South Lake Union Streetcar by making the curb lanes on Westlake Ave transit-only between 6th Ave/McGraw Square downtown and Valley Street/Lake Union Park. This is great news for transit reliability and could support some transit route restructures to greatly improve transit service on clogged streets in the area.

But any mention of this stretch of Westlake Ave (different from the segment to the north that is getting a bikeway) brings up cringes for the many people who have crashed while biking over the poorly-designed streetcar tracks. The gap in the tracks is wide enough to grab skinny and some medium-width bike tires, effectively locking people’s wheels and sending them into extremely dangerous falls, often over the top of their handlebars. Even if a tire is not “grabbed” entirely, wet rails can be surprisingly slick, causing slide-out style crashes.

And it happens to people of all levels of biking experience, even people who think they know how to safely bike around the tracks.

“It’s not a problem until it is, and that moment can happen very very quickly,” said Bob Edmiston, a Seattle Neighborhood Greenways organizer who crashed on the Jackson Street streetcar tracks in January. He broke his collarbone and has not yet been cleared to get back on his bike. (We spoke yesterday as he walked home after the bus system ground to a halt. A commute that takes 20 minutes by bike took him an hour and a half.)

“I’ve been riding on two wheels since I was six,” he said. “Going around railroad tracks at a 90 degree angle is no problem … When I made a left turn across the rails, that’s when my back wheel got caught. I thought I was in the clear, but watching the video, I clearly wasn’t.” Here’s that video from his rear-facing camera:

At least the streetcar tracks on Jackson are in the center lanes, and Jackson is aligned with the standard street grid. It’s easier to cross them at a safe 90 degree angle, and it would be easier for the city to build quality bike infrastructure around them (it was a big missed opportunity not to do so in the first place).

But planners made a terrible mistake when they designed the Westlake streetcar. Not only did they fail to build bike lanes to accompany the streetcar tracks, but they placed the tracks exactly where people biking usually ride: The right-hand lanes.

Many people don’t know that streetcar tracks pose a hazard until it’s too late. Others who know how make quick dodges across the tracks only need to make a small mistake to get caught. People have been and continue to be injured on these tracks. A group of people injured even (unsuccessfully) sued the city over the dangerous design.

Though they lost the suit, they were a big reason the city used a different strategy in designing the First Hill Streetcar, which includes a separated bikeway on Broadway (though, as we noted above, not on Jackson).

But what about Westlake? Isn’t there anything we can do to reduce the hazard it presents to people on bikes? Could this upcoming transit study be a chance to look into our options?

We threw this image together using Streetmix. Dimensions are approximate

The absolute best practice for avoiding bike hazards when building streetcar line is to provide quality, protected bike lanes safe from dangerous rail crossings. This is the best option, but it’s not going to be super easy on Westlake.

And the benefits would go beyond bike safety. For example, even if the curb lanes become transit-only, people will still need to drive in them to reach the parallel parking spots. And poorly-parked cars that stick out into the street can bring the streetcar to a halt. By replacing all the on-street parking with bike lanes, this issue would go away. 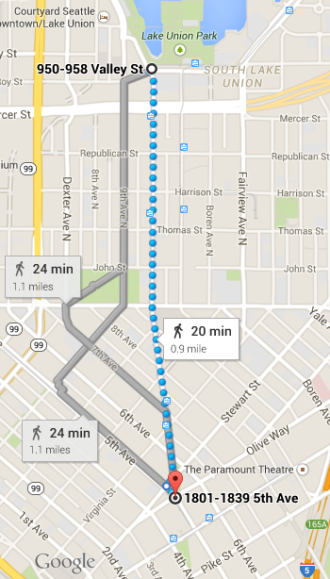 Westlake is the most direct route from Lake Union Park to downtown.

For a neighborhood with a serious traffic problem and high demand for parking, it might seem counterintuitive to remove all the on-street parking from Westlake. And there would certainly be some pushback on the idea.

But the future of South Lake Union is not in cars. Perhaps more than any other neighborhood, it needs safe and direct bike routes and efficient transit as soon as possible.

Most importantly, though, Westlake needs to be safe. Without action, people will continue to crash and be injured on Westlake. Protected bike lanes on 9th Ave N are a great idea, but even they won’t prevent people from also biking on Westlake. Westlake is both full of destinations and the most direct and obvious route.

Bike lanes on Westlake would not only provide a very desirable connection, they would also mitigate a hazard the city created less than a decade ago. It probably won’t be easy or super cheap, but so far the city’s strategy for dealing with injuries has been to shrug their shoulders (and fight lawsuits in court). That’s not good enough.

At the very least, the city could use this as an opportunity to study the options and see what’s possible and what it might cost.

Ideas that aren’t so promising 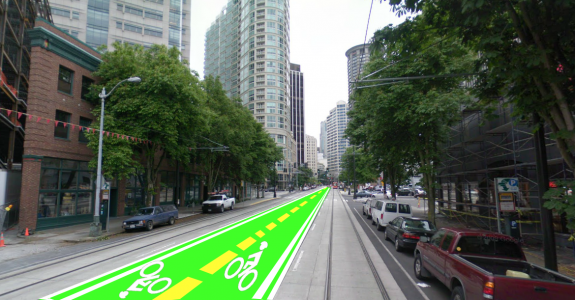 In the past, we proposed an idea modeled on bike lanes on Pennsylvania Ave in Washington DC that would have routed people biking in the two center lanes of Westlake. But turning the streetcar lanes into transit-only lanes would make these center-lane bike lanes impossible. Well, unless the whole street goes car-free, of course. 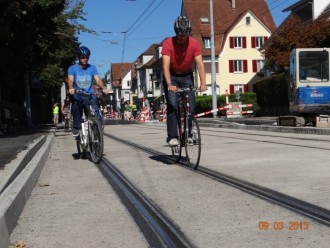 Images from the VBZ agency in Zurich (translated).

Another idea that seemed promising in the past involved a rubber insert that would depress under the pressure of a streetcar wheel, but not under the weight of a bicycle wheel.

The City of Zurich recently tested the concept (Google Translate), but initial results were not super promising. In a short period of time, the rubber filling was damaged and perhaps even more hazardous to people biking. To work, they would need to be replaced regularly. And the fillings still don’t do much to prevent wheels from slipping on wet tracks. 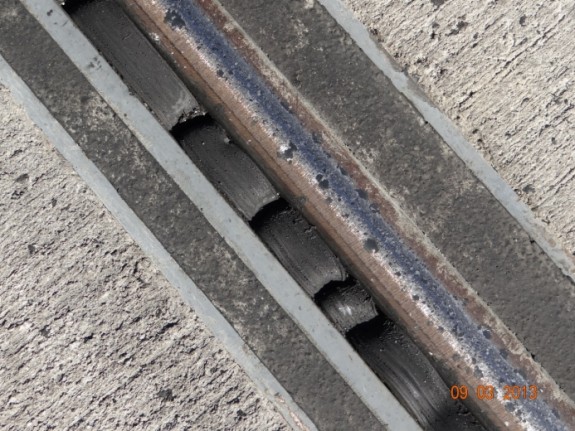 Founder and Editor of Seattle Bike Blog.
View all posts by Tom Fucoloro →
This entry was posted in news and tagged sdot, south lake union, westlake. Bookmark the permalink.

74 Responses to Can Westlake’s streetcar tracks ever be safe for people biking?