Get ready to roll your bike onto the First Hill Streetcar 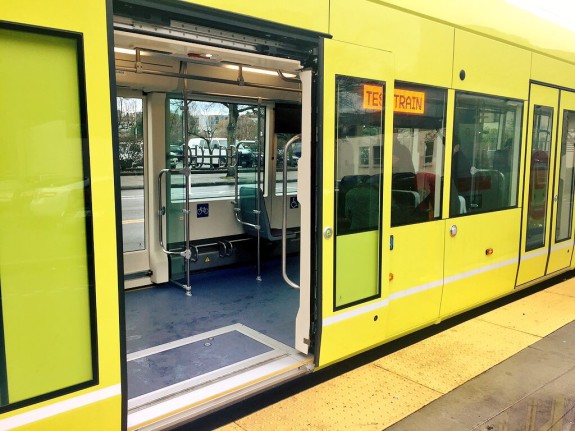 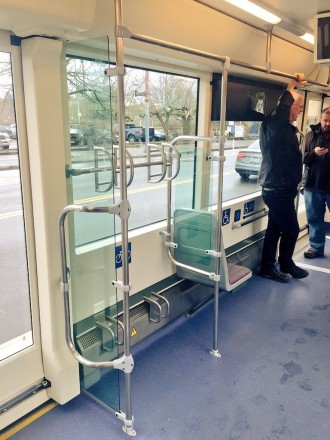 Streetcars and bikes have gotten off to a rough start in Seattle. Planning that neglected bike safety has led to many injuries, especially on Westlake Ave and Jackson Street. We have written about the need for protected bike lanes when streetcar tracks go in, and we will continue pushing for them.

But in this post, we’re going to look at what it will be like to take your bike onto the First Hill Streetcar when it begins service (there’s still no official start date for the delayed line). And so long as the streetcar’s not at crush-capacity, it might actually be pretty easy.

Unlike the South Lake Union Streetcar, which has no designated bike space, the new streetcar trains have two bike hanging spots. And the space across from the bike hanging area is an open accessibility priority space, so a hanging bike probably won’t get in everyone’s way like on Link light rail (especially if you’re a taller person).

And because all the streetcar stops load at street level, there are no stairs or elevators to navigate to roll on. So it’s easier to get on than Link and no need to do battle with a sticky bus bike rack arm. This could prove to be the easiest bike-on-transit option in Seattle. 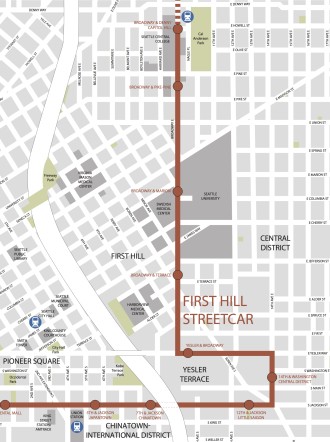 Of course, there is an ability barrier any time people need to lift their bikes to hang them. And this solution also does not work for most big cargo and family bikes, which you will just have to try to hold in the open floor space. But it’s something.

I could see it becoming popular to ride from the ID or Pioneer Square up to Broadway, then biking from there. Yesler Way is a hell of a hill to climb from Pioneer Square, but once you’re on Broadway it’s smooth sailing to just about anywhere on First Hill, Capitol Hill and parts of the Central District.

In the end, taking bikes on transit is not a concept that can scale beyond a certain point. There are limited spaces per run, and it becomes a huge hassle when trains are packed. But when it works, it’s awesome.

A more scalable solution is to expand Pronto Cycle Share and make sure there are stations very close to (preferably right next to) streetcar, light rail and major bus stops. And if Pronto fares can be better integrated with transit fares, more people will be able to access both systems. Bike share can expand the reach of every transit investment we make, but only if we do it right.

This entry was posted in news and tagged first hill streetcar. Bookmark the permalink.