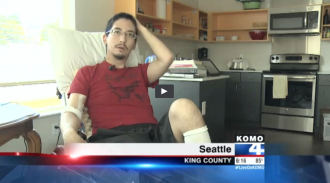 Daniel Ahrendt has a long road back to recovery. But considering what happened, things could have been so much worse.

Ahrendt was biking westbound on Jackson and had just crossed the intersection with 14th Ave/Rainier/Boren when he fell under the wheels of a Metro Route 14 trolley bus. We reported on that collision shortly after it happened May 4.

He suffered a broken pelvis and shattered leg, among other scary injuries. But doctors believe he will recover fully, though it’s going to take some time.

Daniel and his mother Karrie were featured in a recent KOMO News story describing his struggles back to health. It’s remarkable how much better he looks in the more recent footage than he did in the hospital footage. Keep healing up, Daniel!

Sadly, Ahrendt is in no hurry to get back on a bike.

Catherine Fleming, Ahrendt’s attorney with the firm SKW, wrote a blog post describing what she believes led to the collision:

A lifelong cyclist, Daniel saw that that Monday morning was dry and perfect for cycling. As he made his way westbound on S. Jackson during the rush hour, he was in the bike lane with buses lined up sharing that same lane. As he crossed the intersection, he knew that the sharrows would lead him to the right of a bus directly in front of him. Making the safer choice, he aimed for the left side of the lane. That’s when his bike tire got caught in the streetcar tracks. While he was down, the rear tires of a trolley bus ran over the the lower half of his body.

We reported on the dangerous and confusing conditions at this intersection in our original post and also expressed concern about it during the design phase. The streetcar tracks make for a dangerous crossing if you’re biking. Following the sharrows takes riders fully out of the lane, then back in again. If there is a bus stopped in the curb lane, passing it would require a merge across the streetcar tracks in the left lane.

Here’s a short video we put together to show what it is like to bike west through this intersection:

One possible very easy and fast change would be to make the right westbound lane turn-only except transit and bikes. This would reduce the stress and rush on the person biking, since there wouldn’t be someone driving behind them. But, of course, that wouldn’t fix the situation that may have injured Ahrendt.

The only complete solution is to declare a mulligan on the new Jackson design, go back and build bike lanes for the length of the street. This should have happened during the recent remake of the street, which was a huge missed opportunity to make the street safer for everyone. Jackson is very wide with plenty of space for bike lanes if safety is truly considered a priority.

And since Jackson is the only east-west street that bypasses First Hill and crosses both I-5 and the train tracks into Pioneer Square, it will be a major and vital bike route.

It’s going to be harder to retrofit the street with bike lanes now than it would have been to just include them during the remake, but without bike lanes people are going to keep getting hurt.

The main challenge for installing bike lanes would be keeping transit on time. But it’s exactly that: A challenge. It’s not impossible, and the city and county have enough smart people on staff that they can make this street both safe and efficient. No more excuses. This street isn’t complete yet.

Founder and Editor of Seattle Bike Blog.
View all posts by Tom Fucoloro →
This entry was posted in news and tagged daniel ahrendt, international district, jackson. Bookmark the permalink.