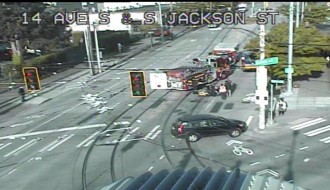 Police are investigating a collision Monday morning that sent a 26-year-old man on a bike to Harborview with life-threatening injuries.

A Metro trolly bus and the injured man collided shortly before 8 a.m. A reader reported (caution: graphic images) that Medics loaded him onto a stretcher and rushed him to the hospital with a police escort.

The specifics of how the collision happened are not yet available.

We’re sending him our best wishes.

Detectives are on scene after a cyclist and bus collided during the Monday morning commute.

Several witnesses called 911 when they saw a collision between a bus and a bicyclist at Rainier Ave South and South Jackson Street shortly before 8 AM.

Traffic Collision Investigators are collecting evidence and speaking with witnesses as they conduct their investigation. The driver of the bus is cooperating with investigators at the scene.

Commuters should expect traffic impacts in the area while in investigation continues.

Though the First Hill Streetcar is not yet operational, the tracks have been in place for a little over a year. Especially on Jackson, where there is no bike lane, the tracks have proven to be a significant hazard to people on bikes. The intersection of Jackson/Rainier/Boren/14th is particularly hard to navigate safely on a bike, a problem we raised during the planning phase. Again, it’s not clear how this collision happened, but this intersection scares me every time I go through.

UPDATE: For an idea of what it’s like to be on a bike in this intersection, I shot this helmet cam video in April 2014. Notice how difficult it is to cross the tracks at a safe 90-degree angle (the sharrows show you the path, but they also lead you fully out of the lane, then back again). It’s not clear yet which direction the man injured was headed, so this video is just to give you idea of the road conditions.