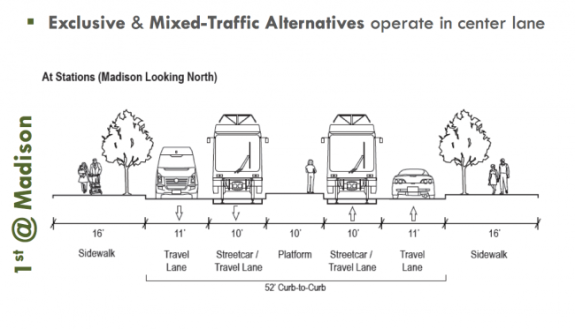 Plans for the City Center Connector streetcar do not currently include a safe bike facility.

Analysis of the options for a streetcar through downtown to connect the South Lake Union and First Hill lines has settled on First Avenue as the best option both for speed and ridership.

As advertised on this site, streetcar planners are holding an open house Tuesday from 5–7 at Pike Place Market in the Elliott Bay Room (3rd floor, enter near La Vaca and take elevator). Remarks by planners and Mayor Mike McGinn at 5:30.

If the streetcar operated in its own exclusive lanes, it could make this trip from Jackson to Westlake in just over 6 minutes. If it operates in shared lanes, the trip would take about 12 minutes, studies suggest.

It appears that the 1st Avenue option is the best for the streetcar and for usability. But what about all the people trying to bike on the destination-packed street? Current plans do not include a bike facility.

In fact, the lack of existing or planned bike facilities on 1st was seen as a positive for selecting the street for the streetcar route instead of a couplet on 4th and 5th Avenues, according to the Tier 1 report. Indeed, the draft Bike Master Plan includes bikeways on 2nd, 4th and 5th Avenues downtown.

But this is looking at things all wrong. Once we put a streetcar on 1st, the street will immediately become a high priority for a safe bikeway because of the danger posed by the tracks. Lots of people bike on 1st Avenue, and the relative lack of driveways and through-streets make the west side of 1st an ideal place for a two-way bikeway.

The issue becomes even more complicated when you consider a streetcar in exclusive lanes. So let’s look at each option.

If a mixed traffic option is chosen, the city could definitely include a safe bikeway in the plans. It could maybe look something like this (made using StreetMix):

Between stops, the design could add a center turn lane, right turn lane, lane of parking or whatever is most desired:

In a mixed traffic design, including a bikeway could dramatically increase bike safety, improve access to businesses and destinations along 1st Ave and make it safer to cross the street on foot.

If the much faster “exclusive streetcar” option is chosen, however, finding space for a bikeway becomes a whole lot more difficult. At stops, there is only room for a platform, two streetcar-only lanes and two travel lanes. Bike lanes could fit between stops, but it’s difficult to imagine how such lanes would work and be truly safe.

Keep in mind that I’m a journalist, not a traffic engineer, but the only way I could see a truly safe bikeway and an exclusive streetcar both fitting on 1st Ave would be for the street to become a one-way. I have yet to hear this mentioned as an option but maybe it could look something like this:

This is a difficult decision. Seattle desperately needs better and faster transit, and the appeal of cutting the cross-downtown travel time down to six minutes is huge.

But Seattle also needs better and safer bike routes, and safety for people on bikes and on foot should be our top transportation priority. Though all plans shown so far avoid placing the tracks in the curb lane (a dangerous mistake made in the design of the South Lake Union Streetcar), building a streetcar on First Avenue without a bikeway could make the street more dangerous for people on bikes than it is today.

What do you think? Should the city be considering another downtown streetcar that does not include a safe bikeway?