Seattle is finally set to make some much-needed bike safety improvements to streets near Bailey Gatzert Elementary School, where many people have crashed on the First Hill Streetcar tracks since the line was constructed in 2014.

The First Hill Streetcar and Bicycle Safety Enhancements Project (fact sheet PDF) will add protected bike lanes to 14th Ave S between S Jackson and S Washington Streets and to E Yesler Way between 14th and 12th Avenues S. The improved bike lanes will have an extra level of separation between people riding in the bike lane and the streetcar tracks. It will also make it less likely that someone driving will be able to pull over and block the bike lane, sending people biking into the tracks as they try to pass.

The project will also relocate a Route 27 bus stop from the northwest corner of 14th and Yesler to the northeast corner. This will both make room for the improved bike lane and create a space for people biking down hill to merge right and enter the new bike lane.

The project does not address the more complicated changes needed to fix the dangerous 14th/Jackson/Rainier/Boren intersection nearby. That intersection was the subject of a lawsuit stemming from a separate terrible crash in May 2014, a year before McCloud’s death. The City of Seattle settled with Daniel Ahrendt for $1.55 million this summer, four years after the streetcar tracks on S Jackson St sent him crashing to the ground where he was then run over by a Metro bus.

Work to improve bike/streetcar safety is far from over.

The fixes come three years after community members and loved ones of Desiree McCloud held a walk remembering her life and demanding either safety fixes.

McCloud was biking westbound down Yesler Way with a group of friends in May 2016 when she crashed hard around 13th Ave S. She died from her injuries a week and half later.

The cause was very likely a set of tracks for the First Hill Streetcar, which turns west onto Yesler Way at 14th Ave S. Video shows her riding between the tracks moments before the fatal crash, meaning she would have needed to merge across an embedded rail to get into the paint-only bike lane squeezed between the tracks and parked cars on the righthand side of the street. Family members have sued the City of Seattle for wrongful death, saying the streetcar tracks caused the fatal collision.

Yesler Way is a long and steep downhill heading westbound before reaching 14th Ave S at the bottom of the hill. So with a fair amount of speed, people biking have to make a choice to merge right in the middle of the intersection to get into the painted bike lane or go straight and bike in the lane with the streetcar tracks.

It is safest to cross streetcar tracks at a 90-degree angle to prevent your bicycle wheel from slipping into the gap, which can effectively grab a bicycle wheel and send the rider crashing suddenly and with no warning. But once you are riding in between two tracks, you’re in a tough spot because it can be difficult to turn sharply enough to cross the rail at a safe angle. And because the streetcar tracks run within general purpose traffic lanes, stopping your bike does not seem like a good option.

McCloud is far from the only person who has crashed here. Since news of her death came out, many people have reported similar crashes. One Q13 News reporter was even on location filming a story about the McCloud lawsuit a year after her death when another person crashed and was injured right in front of him. 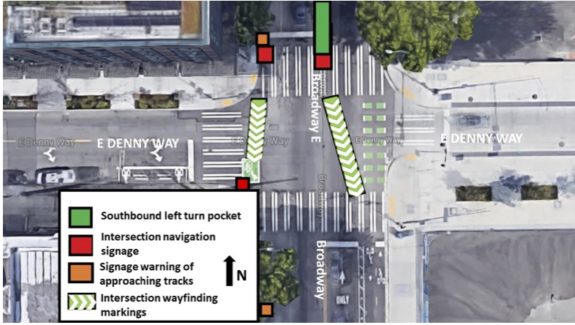 The city is also finally painting a bicycle turn lane on southbound Broadway at Denny Way that was originally designed during initial construction of the First Hill Streetcar line as we reported back in 2011. So this painted bicycle turn lane is about half a decade late. But better late than never?

As noted in the fact sheet (PDF), “Southbound cyclists often miss the entrance to the Broadway protected bike lane.” The idea here is that people biking south in the general purpose lanes on Broadway will have two options for getting into the two-way bikeway on the left side of the street starting at Denny Way: Wait in the existing two-stage turn box on the right side of the intersection until the signal changes or merge into a bike-sized left turn lane. People already make this maneuver today using the painted buffer area, but this will make it more official. 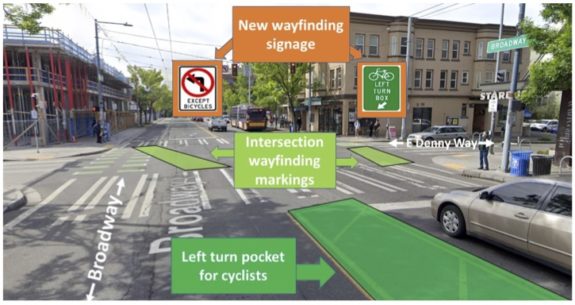 The initial design called for a similar turn lane at Howell St, which would give anyone who missed the turn at Denny another chance to get into the bikeway before the streetcar tracks enter the roadway. 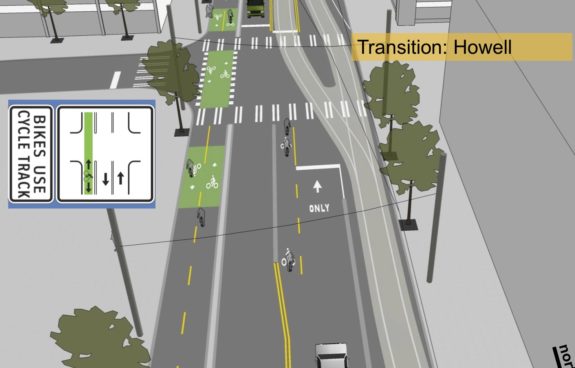 From a 2011 Seattle Streetcar presentation (PDF).

The best solution, of course, would be to finish the Broadway Bikeway by completing the planned-but-shelved design that would extend it to at least Roy St with or without the streetcar.

The only complete solution for bike safety around streetcar lines is separation. So all these latest planned changes are very welcome steps in the right direction. Now let’s talk about Jackson Street. And Westlake, Terry and Thomas. And Stewart and 1st…