What does a city say to a grieving family when they ask, What value is there in a streetcar if the tracks injure or even kill people?

Seattle officials did not have any adequate answers to this question during a meeting with the friends, family and neighbors of Desiree McCloud Monday. Desiree died in May following crashing while biking on Yesler Way at 13th Ave. The First Hill Streetcar tracks were likely the cause, friends said.

And it may be that there simply is no acceptable answer to give.

During a short memorial at the site of her ghost bike before the meeting, a friend described Desiree as “brash and brilliant, passionate and true.” The friend also said Desiree’s style was to “demand a better world, and act to make it happen.”

And that’s the challenge laid out for people working to make streets safer so nobody else crashes in this location and on these or any of the city’s streetcar tracks.

“If one of her friends had been hurt or killed, she’d be the one banging on City Hall,” her dad told the group gathered after the memorial.

One course of action suggested: Bulldoze the tracks tomorrow.

Others pushed for low-cost improvements to Yesler the city could install very quickly such as paint-and-post protected bike lanes at least to 14th Ave where the tracks turn south. And the urgency of this cannot be ignored. This isn’t a demand to improve the street “someday,” it’s a demand for action now.

You can sign a petition pushing for quick action on Yesler and a revamping of how the city mitigates track danger citywide. 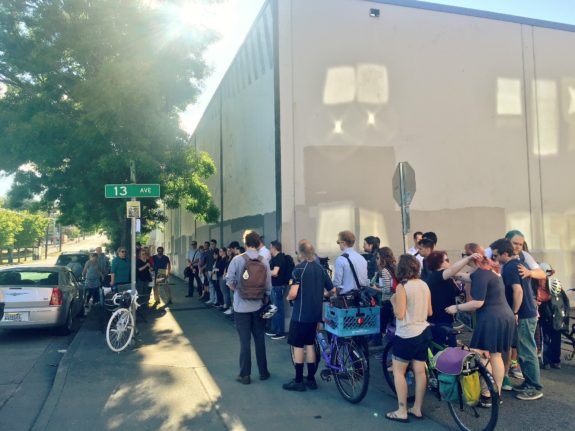 Desiree was biking with friends westbound on Yesler one month ago when she crashed after a long downhill while passing a friend on the left. That friend bravely told her traumatic story during the meeting.

“I was the only person who saw what happened and I didn’t see exactly what happened, so we’ll never know for sure,” she said. “I feel personally convinced that the tracks were involved.”

The group chose Yesler because it has bike lanes, she said. It was the first time the friend had biked to the International District, and her first time on this stretch of Yesler.

“At least from my perspective as a first time biker on Yesler, I didn’t notice the tracks coming,” she said. “The design is insane.” 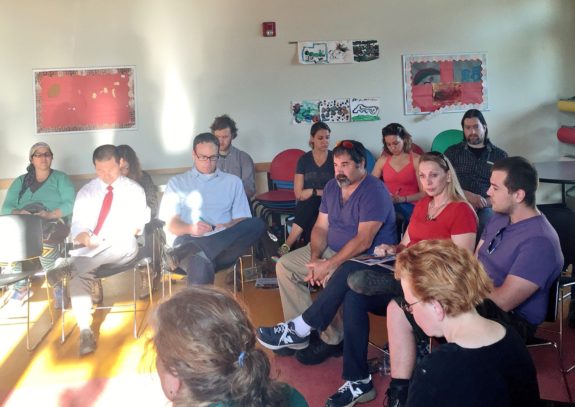 And perhaps because news of Desiree’s May 13 crash has spread so far, more stories of crashing on the tracks in the area have come forward in recent weeks. Just five days later, Jessica Hicks was riding her scooter when she crashed and was seriously injured on the tracks at 14th and Yesler, KOMO reports. That’s the same block Desiree crashed.

Denise Chew was riding her Vespa May 20 when her wheel got caught in the First Hill Streetcar tracks at 12th and Jackson, just one week and five blocks from where Desiree crashed. Chew was seriously injured (and, insult to injury, her Vespa was auctioned while she was recovering in the hospital). That’s at least three serious crashes in just one week in May.

The scary thing is that other than the relative rarity of a death, that week may not have been abnormal. When the group of about 40 people gathered after the memorial was asked to raise their hands if they have crashed on tracks, ten hands went up. That’s one in four hands in a room where several people don’t even live or bike in Seattle. These aren’t rare, freak accidents. These are known dangers designed and constructed in recent years.

We only have anecdotes to draw from because very few solo crashes on the tracks generate police reports, which are typically reserved for collisions where citations or crimes need to be determined. This means the city is essentially not counting these crashes. It’s harder to call for safety changes when you don’t have data to cite.

But we don’t need more data here. These awful anecdotes are far more than enough to justify swift action.

“No one should have to be the one to sacrifice,” Desiree’s mother Penny told KOMO, “to point out how unsafe it is.”

When the streetcar was constructed on Broadway, the city and Sound Transit built a protected bikeway adjacent to it essentially as mitigation so the street did not become more dangerous for people on bikes. This was the right move. People in the meeting expressed frustration that protected bike lanes were not included for the entire route.

Both during planning and as soon as construction was complete, we have argued that the city needs to declare the design on Jackson a failure and add protected lanes there. 14th Ave and Yesler Way should also get improvements. So should Westlake Ave, Valley and Fairview in South Lake Union (Desiree’s brother Cody said he has crashed on the tracks at Fairview and Valley). This will at least help mitigate the new dangers added to these streets for people on bicycles, though it may not help people on scooters.

All this comes as the city is planning a new streetcar line downtown connecting the First Hill and South Lake Union lines via 1st Ave and Stewart Street. Those plans so far do not include bike lanes, which we pushed for early in the planning process. Stay tuned for more on the project. 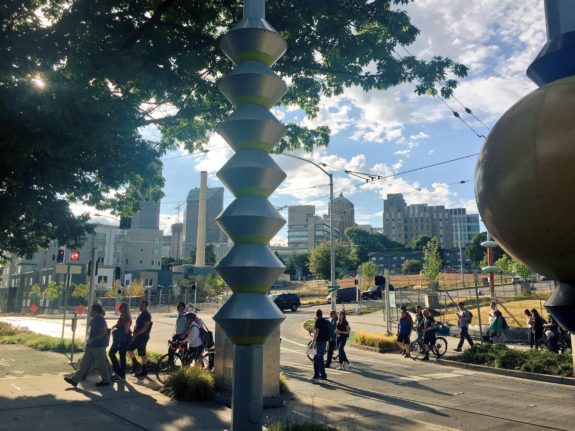 The city’s Vision Zero policy says traffic deaths and serious injuries are preventable, and street design is a core factor in safety. SDOT consistently says safety is the agency’s top priority. So what possible justification is there for streetcar lines that don’t include safe bike lanes? I’m honestly asking because I have yet to hear a single answer from anyone, whether from a city official or a streetcar advocate.

I have heard city officials say things like “Every street can’t handle every mode” as justification for not including bike lanes, but that’s in direct conflict with their stated goal of putting safety first. What that phrase really means is: We don’t want to impact driving, so some injuries or deaths for people biking are acceptable.

Because after witnessing the pain of loved ones trying to understand such a loss, the bulldozer option is sounding pretty good.