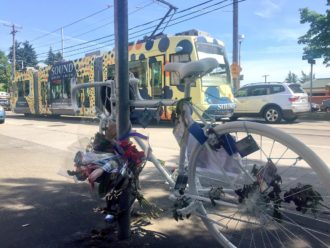 The walk starts 6 p.m. at Bailey Gatzert Elementary. The group will cross the street to the ghost bike memorial set up at 13th and Yesler where McCloud crashed last month while biking with friends. She passed away a week and a half later from a head injury.

Her passing prompted an outpouring of remembrances from friends. She clearly touched a lot of lives.

After a memorial at her ghost bike, the group will walk up the hill to Yesler Community Center for a meeting to discuss solutions so it does not happen again.

It is not yet clear if the First Hill Streetcar tracks on Yesler played a role in her crash, but concerns about track safety have been heightened since she passed away. About a week after McCloud crashed, a woman on a Vespa crashed and was seriously injured on the tracks at 12th and Jackson.

One year ago, Daniel Ahrendt crashed on the streetcar tracks at 14th and Jackson, just three blocks from Desiree’s ghost bike. Like Desiree, Daniel had moved to the left to pass someone (in his case a stopped bus). His wheel hit the tracks and he fell, then the bus ran over him and seriously injured him.

Tracks are a common cause of solo bike crashes because tires can get caught in the gaps or slip on the wet or oil-covered metal. Tracks are especially dangerous when they cause over-the-handlebar crashes.

Searching for other possible explanations, one friend suggested that she may also have started to “speed wobble” after the long downhill heading west on Yelser. Unless police know more than they have released, we may never know for sure what caused the crash.

But facing the loss of such a giving person who donated so much of herself to others — including her work as a regional leader for the Girl Scouts — people are looking for ways to contribute positively in her memory. People hoping to contribute financially can donate to the Girl Scouts of Western Washington in McCloud’s honor.

Central Seattle Greenways is urging the city to install protected bike lanes adjacent to streetcar tracks, a policy we have long advocated for on this site. You can sign their petition online.

More details on the memorial and solutions meeting from the event listing:

Central Seattle Greenways will lead a Memorial Walk and Solutions Meeting to honor the life of Desiree McCloud and to bring attention to the many collisions that have happened to people who bike along streets with streetcar tracks including East Yesler Way and where Desiree McCloud crashed on her bicycle.

The Memorial Walk will start in front of Bailey Gatzert Elementary School at 1301 E Yesler Way. We will walk across the street to the ghost bike marking where Desiree crashed her bicycle. Desiree’s mother, Penny McCloud will speak, as well as other community representatives.

Girl Scout leader, Magic player, Geek Girl Desiree McCloud was a dynamic young woman completely engaged in a positive way with many communities in Seattle. Gifts in honor of Desiree can be given to a scholarship fund being set up for girls in science at the Girl Scouts of Western Washington at http://bit.ly/1UgDhyF .

Seattle Neighborhood Greenways honors people who have died walking and biking on Seattle streets. We only do Memorial Walks with the full blessing and cooperation of families of the victims. This advocacy honors families, provides a forum for the community to grieve the loss together, and gives communities an opportunity to address street safety.

The Memorial Walk will conclude with a Solutions Meeting with City officials at Yesler Community Center at 917 E Yesler Way to look for solutions to make our streets safer. Central Seattle Greenways has posted a petition for safer streets with streetcar tracks including East Yesler Way at http://bit.ly/1Q6v91N

About the Demands for a Safer Street http://bit.ly/1Q6v91N
Central Seattle Greenways makes the following demands:
(1) Immediately, Seattle Department of Transportation (SDOT) needs to provide continuous, intuitive, protected bike lanes on Yesler between 14th & Broadway to protect people biking from the streetcar tracks. In the longer term, the entire Yesler corridor is inconsistent and unsafe for people biking. SDOT needs to evaluate it and install safe, consistent biking infrastructure along Yesler from downtown to 30th Ave S.

(2) The City of Seattle must develop a policy to provide safe, protected bike facilities wherever streetcar tracks are laid.

About Desiree McCloud
Girl Scout leader, Magic player, Geek Girl Desiree McCloud was a dynamic young woman completely engaged in a positive way with Seattle. It is being investigated at this time whether Desiree died as a result of crashing on streetcar tracks on E Yesler Way in front of Bailey Gatzert Elementary. However, streetcar tracks often cause bicycle crashes. You can read more about the crash and about Desiree at http://komonews.com/news/local/family-wants-changes-to-seattle-streetcar-tracks-after-fatal-bike-crash

Seattle Neighborhood Greenways honors people who have died walking and biking on Seattle streets. We only do Memorial Walks with the full blessing and cooperation of families of the victims. This advocacy honors families, provides a forum for the community to grieve the loss together, and gives communities an opportunity to address street safety.
http://seattlegreenways.org/our-campaigns/memorialwalksrides/