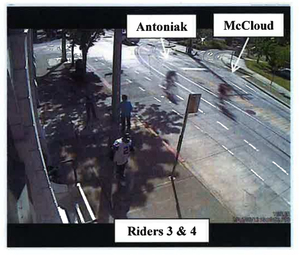 Surveillance video of the moments before Desiree McCloud’s fatal crash in May answers a major question about the incident that took her life: She did cross the First Hill Streetcar tracks around the time she crashed.

A screenshot from the video, obtained by Evan Bush at the Seattle Times, shows McCloud riding between the westbound set of tracks embedded in the road just west of 14th Ave, the same block where she crashed. This confirms she would need to cross the northernmost track to get back into the bike lane.

The video revelation seems to support the belief held by many of friends and family members that the streetcar tracks grabbed her wheel or otherwise caused her to lose control. Previously, it was not clear whether she ever crossed the tracks, though that theory made the most sense to explain why a confident cyclist would suddenly crash the way she did. Now we know for sure she did cross them.

Friends, family and community members walk in honor of McCloud. Her ghost bike sits at 13th and Yesler.

Streetcar tracks are very common cause of bike crashes in Seattle and in cities around the world. The gap in the tracks is just wide enough for many bike tires to slip inside. When that happens the wheel stops, sending the rider crashing quickly and without warning. Tracks are also slippery when wet and sometimes are raised enough to cause crashes even without fully grabbing the wheel.

It is safest to cross tracks at as close to a 90 degree angle as possible. Unfortunately, this is a lesson that many people learn the hard way, and even people aware of track dangers can get caught either due to confusion, by making a slight mistake or by hitting a particularly slippery rail.

Last month, the Seattle Times looked into the issue and asked readers to tell them their stories. They received more than 80 responses, many of which were never reported in any of the city’s official traffic crash statistics. So we know it is a big problem, but we don’t have the data to know how bad it really is because police reports are rare in solo crashes.

Road rash and bad broken bones are common. Deaths like McCloud’s are rare.

Police say McCloud was going about 20 miles per hour after the long downhill westbound on Yesler. While that is well below the speed limit, it is a fast speed for a sudden crash.

Police conclude that even with the video it is “impossible” to conclude whether the rails caused her crash, the Times reports:

“It is unknown if McCloud attempted to cross back over and if interaction with the rail was what led to her loss of control, and that question appears impossible to resolve,” police wrote in the report. “What is known is that no other vehicles were involved and that McCloud lost control of her bicycle, which caused her to fall to the ground. This incident, though obviously tragic, appears to be the sole result of some form of operator error on the part of McCloud.”

Attorneys for the McCloud family are not convinced and are continuing the work on the case.

McCloud leaves behind many heartbroken loved ones, who describe her as “brash and brilliant, passionate and true.” You can read many notes about her life gathered in our original post about her passing.

Founder and Editor of Seattle Bike Blog.
View all posts by Tom Fucoloro →
This entry was posted in news and tagged desiree mccloud, first hill streetcar, yesler. Bookmark the permalink.