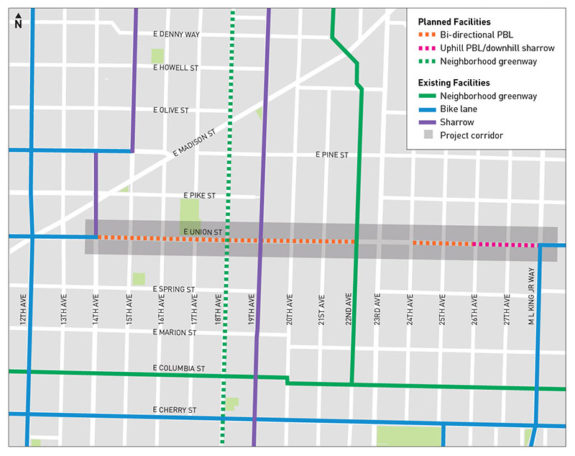 All you have to do is disappear from existence for two blocks while biking and you’ll be fine.

Seattle is once again set to choose the convenience of car driving over the safety of people walking and biking and our city’s Vision Zero, Climate Action Plan and Bicycle Master Plan goals. This time, it’s on E Union Street in the Central District, where early designs for a planned protected bike lane on the street will fail to fully connect across the two busiest and most important intersections in the project area: 23rd Ave and MLK Way. The reason? Cars, of course.

The single clearest example of the city bailing on its goals is their plan to completely drop the bike lanes for the two blocks surrounding 23rd Avenue. And worse, SDOT spokesperson Ethan Bergerson told the Urbanist’s Ryan Packer that people could just bike on the sidewalk:

“People biking would have the option to get through the intersection by crossing in the marked shared lane or using the sidewalk. We understand that bikes using the sidewalk is not always optimal, however, developments on both sides of 23rd Ave are expanding the sidewalks providing some relief.”

SDOT just used their official megaphone to lean out their car window and yell at people biking to “get on the damn sidewalk!”

Biking on the sidewalk in a busy business district is not a solution, and SDOT damn well knows it. But just to illustrate the point, David Seater recently took SDOT’s advice. Here’s how that went:

I took SDOT's advice and rode on the "expanded" sidewalks on Union from 22nd to 24th. They're right, it's "not optimal." If this is the vision for All Ages & Abilities / #ALEGRA / #VisionZero streets then we should just shut the whole department down. pic.twitter.com/RHkYmH7N13

And this video wasn’t even at a time with heavy foot traffic.

To make matters worse, here’s one of the project’s proposed “benefits” from the official fact sheet (PDF):

SDOT’s traffic professionals know that you can’t just have the bike lane disappear for two blocks and expect it to function as a high quality, all ages and abilities bike route. They also know that bike lanes improve safety for all road users, since they practically wrote the book on that in the US. They know that intersections with shorter crosswalks (thanks to the presence of bike lanes) are much safer for people walking. They know our city needs to transition away from driving toward biking, walking and transit if we are going to keep people and goods moving as the city grows. They know all this because they also helped write our Council-approved plans and policies aimed at achieving that goal. That’s why this plan is so troubling.

The safety of our city’s residents is not some bullet point on a list to be weighed against the driving and parking convenience of people in cars. SDOT is constantly claiming that safety is its number one priority, but then they say stuff like this to the Urbanist:

“To fit a PBL through this section, we’d need to remove a vehicle travel lane in each direction. Condensing vehicles into a single lane would not only create slow downs for vehicles, it would also create a safety concern for pedestrians. Our traffic data shows a heavy amount of right turns at the 23rd Ave and Union St intersection, which means that removing a vehicle lane would increase the vehicle and pedestrian conflict.”

Slowing cars is a safety benefit, not a problem. SDOT knows this. And bike lanes improve safety for people on foot, and, again, SDOT knows this. They know it. I don’t get why they are saying otherwise right now because they know bike lanes, when designed well, don’t “create a safety concern for pedestrians.” They are trying to pit people walking and biking against each other so they can preserve the status quo where every inch of road space prioritizes cars. It’s despicable and, considering people’s safety is at risk, unethical. They know this is wrong.

I keep saying “they know this” because, given Mayor Jenny Durkan’s recent decisions to delay or cut bike lanes, it’s safe to say that the direction to avoid all impacts on driving is coming from her office either directly or by assumption. Through decisions like 35th Ave NE, the mayor is directing SDOT’s transportation professionals to knowingly make decisions that put people’s safety at risk for the mayor’s personal political reasons. Spokespeople like Bergerson are trying to find justifications for these decisions, but there are none.

Following the blowback from her 35th Ave NE decision and SDOT’s major cuts to the short term bike plan earlier this month, SDOT Director Sam Zimbabwe and Deputy Mayor Shefali Ranganathan were sent on something of an apology tour, trying to stress that the mayor remains committed to safe streets, the Climate Action Plan and building the Bicycle Master Plan. Both Zimbabwe and Ranganathan stressed that the mayor wanted to focus on connecting places, not just building bike lane mileage.

Well, here’s a great opportunity for the mayor to step in and prove it. Because this plan is not connected and does not meet our city’s transportation and climate goals. But it doesn’t have to be this way. The design is only at ten percent with plenty of time to improve it if the mayor directs the project team to do so.

First off, there is a good part to this design. Between 14th and 22nd Avenues, the city will add or upgrade bike lanes to be parking-protected. Getting the design right at each intersection and driveway will be very important, but this is a great starting point.

But once the project gets to 22nd, it abandons these bike lanes entirely. E Union Street today is has two lanes (one in each direction) plus two parking and painted bike lanes at 22nd Ave, but then widens out to five lanes (two each direction and a left turn lane) plus a parking lane before reaching 23rd. There is no space constraint here. Traffic doesn’t suddenly double in that one block. I’m no traffic engineer, but I’ll go ahead and take a stab at what 23rd/Union that actually prioritizes walking, biking and transit might look like:

These images are mid-block between 23rd and 22nd, looking west. I made them using Streetmix (existing, remix), the same website SDOT staff used (measurements are my estimates). SDOT staff don’t need me to make these for them, because they know all this already. I’m sure they also have their own better ideas. But it’s important for non-professionals to imagine the ways our streets could be different if only SDOT were empowered to challenge the car-centric status quo.

Other stretches of the street could also easily include continuous and connected protected bike lanes, but only if the city prioritizes them over private car storage and excess general purpose lanes. Connecting to MLK is very important, especially since MLK is supposed to get its own protected bike lanes someday, according to the Bicycle Master Plan. And connecting to the Broadway Bikeway is just three blocks from the project’s western end point, which is tantalizingly close. From there, Broadway is due soon to connect to new Pike/Pine bike lanes into downtown.

If you look at the Bicycle Master Plan map, you can see how Union is a vital artery in the city’s connected network of protected bike lanes:

The Central District has long had one of the highest bike commute rates in the whole city, and Union is the only viable route option for many homes and destinations. Today, it can be a stressful street because bikes lanes come and go. Seattle now has a chance to make a major improvement, but only if the mayor directs SDOT to do the right thing. So far, the city seems prepared to blow this opportunity, but it doesn’t need to be this way.