Rashomon in Wedgwood: SDOT Director and Deputy Mayor grilled during Bike Board meeting

SDOT Director Sam Zimbabwe and Deputy Mayor Shefali Ranganathan sat down for a long talk with the Seattle Bicycle Advisory Board Wednesday to have a difficult and at times uncomfortable conversation about Mayor Jenny Durkan’s commitment to building the city’s Bicycle Master Plan.

But even if the talk ended with gulfs still between the Board and the Mayor’s Office, both sides offered some valuable insights that I hope will prove fruitful once the temperature in Room 370 cools back down to 72 degrees. And, importantly, the talk generated a path for regaining trust if the Mayor chooses to make the effort.

Undoubtedly @SeaBikeBlog will have the complete rundown tomorrow. Tom was there too, but no tweets.

Ranganathan said she asked to be added to the agenda late because she wanted to “share a little bit of the mayor’s vision” for biking and transportation projects.

She cited escalating construction costs, due in significant part to a competitive construction contract environment, saying “there was  a misalignment with what was promised to voters in terms of mileage .. across the board.”

This led to the Mayor’s Move Seattle “reset,” in which she said the mayor then gave these policy directions:

“I will sort of own the fact that this plan should have been here sooner than it was,” she said. “SDOT won’t say it so I will: They have been dealing with the Seattle Squeeze and the snow…what ended up resulting was SDOT was really squeezed for capacity.”

And while this plan is based on what they see as realistic, “that doesn’t preclude us from looking for more resources to build more projects.”

But Ranganathan said that Mayor Durkan “is committed to a safe and connected bike network” and that they are “going to be as transparent as we can” about their process going forward.

But Board members generally weren’t convinced about that commitment, noting that judging by her actions she has mostly delayed or canceled bike lanes so far.

“I don’t think there’s a lot of confidence on this board and the advocacy community generally that when these projects are politically difficult that these projects will get built,” said Board Member Emily Paine.

Ranganathan said multiple times that the mayor didn’t want to just grandstand, but that she wanted to actually build a connected network. Then the Board said repeatedly that they have yet to see that action. This odd agreement/disagreement went around in a circle a few times and was never settled.

“At the end of the day, [the mayor’s] report card is the projects that actually got completed, not the promises that got made,” said Ranganathan. But according to that rubric, the mayor is definitely flunking due to the majority of her work still marked incomplete. It may take some extra credit if she wants to catch up. (OK, this analogy is getting too stretched.)

But this is the opening where the Mayor’s Office can do something. People need to see a significant action, something bold that demonstrates the mayor’s commitment. Board members (and myself) have highlighted Rainier Ave S (between downtown and Mount Baker Station, at least), 12th Ave between Yesler and Beacon Hill, or Beacon Ave as high-impact projects that were recently cut. Whether she grandstands or not when breaking ground is up to her. I personally enjoy a good grandstanding when it is coupled with bold action.

SDOT Director Sam Zimbabwe started by introducing himself (this was his first Bike Board meeting since joining the department in January), and then apologized to the Board for listing them as the reason so many projects were listed as removed from the plan.

“We know you guys didn’t remove projects from the plan, and we apologize for that,” he said. The Board had helped prioritize projects, and some of the lower priority ones did inform SDOT’s removal decisions. But the Board was not knowingly cutting projects, and several of the Board’s top priorities were also removed.

The latest plan is really just a draft, and they are collecting feedback, Zimbabwe said. But he warned against “simply adding projects back in that are on the contingency list without saying, ‘Here’s what we are willing to give up.'”

He also added that projects cut were not removed from the Bicycle Master Plan, they were just from this implementation plan and things could be added back in the future “as conditions change and as we are able to secure funding.” 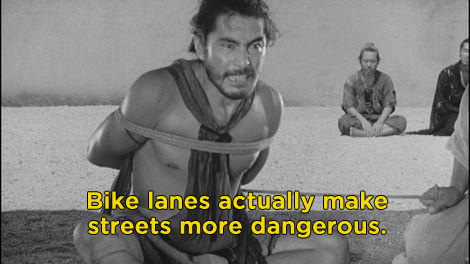 When the conversation moved squarely to 35th Ave NE, Zimbabwe made a solid Akira Kurosawa reference by saying that, as someone who came into this fight at the very end, it has felt like the classic 1950 film Rashomon.

“Everyone who has ever been involved with that project has their own narrative” of how the project and surrounding debate got this point, he said. (If you haven’t seen Rashomon, it’s really great. You can watch it free online via Kanopy using your Seattle or King County Public Library card.)

He also questioned whether the designed and contracted bike lane design was really an all ages and abilities facility since only one direction was going to be protected, then questioned why bike advocates were fighting so hard for it.

“It became the best bike lane in the city,” he said of the tone he heard from advocates, and people were acting as though “not building it right now, it would be a critical failure.” It sounds like Zimbabwe may be giving a little too much credence to Tajōmaru’s testimony.

Bike advocates had fought for full protection for the 35th Ave NE project during the proper design phase, but the city returned with a half-protected design as an early compromise to accommodate car parking. So once SDOT’s design was final, advocates fought to defend the city’s compromise plan. But then that compromise was challenged by angry neighbors, who ultimately prevailed in winning a turn lane that few people ever asked for. So what is the lesson here? That bike advocates should never have compromised in the first place? That advocates were foolish to try to support SDOT’s decision?

Ranganathan said part of the problem was that SDOT had originally called the project a paving project. “No reasonable community member would assume a paving project would include a complete redesign of the whole corridor,” she said, ignoring that the city’s complete streets ordinance, on file since 2007, requires exactly that. So now people in Wedgwood won’t be able to safely bike to the library because SDOT staff used too few descriptors in their project title a few years ago? How does that makes sense?

No, Zimbabwe’s too smart to trust Tajōmaru at his word. Maybe he’s trusting the woodcutter Kikori, forgetting the twist at the end (spoiler!) that Kikori, too, was a compromised witness all along. Though Kikori ultimately feels shame and decides to care for the orphaned baby he, the priest and the commoner found while seeking shelter from a rainstorm, a display of penance on behalf of humanity’s inherently selfish nature. (OK, this analogy is also falling apart.)

But Zimbabwe told the Board that the 35th Ave NE decision does not endanger other projects.

“I don’t think it sets a precedent for building out the network,” he said.

Honestly, I don’t think there’s much point to getting angry at Zimbabwe since Ranganathan made it clear that Mayor Durkan made this decision.

“The mayor agonized over it,” she said.

If there was any doubt that this decision was political and not based on traffic engineering best practices, then this clears that up. The mayor is Zimbabwe’s boss, so he’s got to defend her decision, which puts him in an impossible position because the best practices of his profession are not on her side. SDOT’s professionals came up with the bike lane design, so Zimbabwe somehow needs to explain why his professional staff was wrong and the mayor was right. And he can’t because she is wrong.

Former Board Chair Casey Gifford shared similar feelings toward SDOT staff during public comment, who she said are trying to do the right thing but are being hindered by the mayor.

“The city keeps using money excuses, but 35th and 40th, those are political will,” she said, pointing out that because those bike lanes share costs as part of paving projects, they are extremely cost-effective.

“I feel really sorry for [SDOT staff] to have to work for such an uninspiring mayor,” she said. The Mayor’s Office ousted Gifford from SBAB in December with only a few hours of notice before her last meeting, giving essentially no time for the Board to plan a Chair transition. Since Board members are limited to two terms anyway, assuring lots of turnover and new voices, members are rarely (if ever) denied a second term if they want to continue serving.

I think everyone is ready to stop fighting about 35th Ave NE. Oh, lordy, I know I am, though I doubt this is truly the end of it. And maybe there will never be agreement on how it got so royally messed up. But it will be impossible to move past it without a replacement project of equal or greater scale that demonstrates the mayor’s stated commitment to building a connected bike network. She can move heaven and earth in this town when it is a priority for her (look at the NHL arena). And folks aren’t even asking for that much heavenly movement. Maybe just a heavenly nudge. (OK, I really need to work on my analogies…)

29 Responses to Rashomon in Wedgwood: SDOT Director and Deputy Mayor grilled during Bike Board meeting