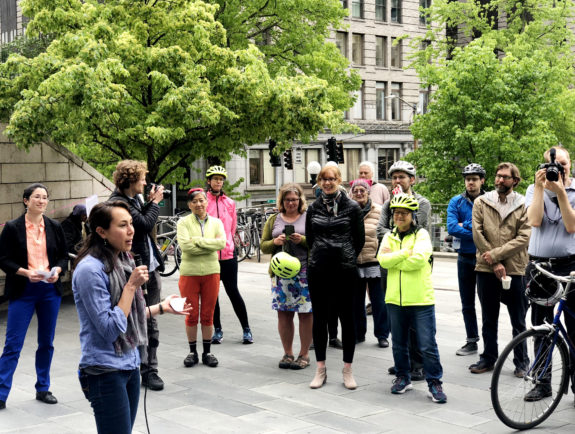 Casey Gifford speaks to a crowd gathered for the Bike to Work Day 2018 rally at City Hall.

Just hours before the November meeting of the Seattle Bicycle Advisory Board, Co-Chair Casey Gifford received a call from the Mayor’s Office informing her she was headed to her last meeting on the volunteer board.

The decision stunned Board members and surprised Gifford because this has never happened before, at least in recent memory. And it certainly has not happened to the Chair of the Board with no time to plan for a leadership transition. There are so many new members on the Board that only Amanda Barnett has completed a full term, Erica Barnett reports.

“I wanted to step down as chair, but I didn’t feel it was the right time with how many new people we had,” Gifford told Seattle Bike Blog.

Typically, if a Board member wants to stay on for a second term, they can. Members are limited to two two-year terms, which prevents the Board from becoming stagnant and creates space for new leaders and new voices. This system works, which is why the statement the Mayor’s Office sent Seattle Bike Blog doesn’t add up:

It’s the Mayor’s priority to continue to bring in new voices on her boards and commissions. We’re grateful for Casey Gifford’s service and look forward to welcoming a new chair in the coming weeks. The Bike Advisory Chair will be a critical role as we advance the Mayor’s commitment to multimodal transportation in the City of Seattle.

In just two years, had proven herself to be a very valuable and dedicated leader. That’s why it’s so surprising not only that the Mayor’s Office would choose not keep her on for another term, but that they would dismiss her so abruptly.

Perhaps this is a good time to remind everyone that the Bike Board is a volunteer gig that has no actual decision-making power. The city won’t even put in the effort to record their meetings for the Seattle Channel website, so the only records are the meeting minutes and any letters they choose to write. It requires a lot of time and energy, especially for the Chair, and the personal gains are minimal beyond fulfilling a basic desire to help make the city better for biking. I guess it could also look good on a résumé.

Half the members are appointed by the Mayor and half are appointed by the Council. They are tasked with “advis[ing] the City Council, the Mayor, and all departments and offices of the City on matters related to bicycling, and the impact which actions by the City may have upon bicycling; and shall have the opportunity to contribute to all aspects of the City’s planning processes insofar as they may relate to bicycling,” according to the 1977 resolution that created it (PDF). Basically, they can ask questions and write letters. They can be effective in influencing decisions if city leaders choose to listen, but they don’t have any direct authority.

In Gifford’s place, Erica Barnett reports that the Mayor has appointed Selina Urena. Urena formerly worked in development at Bike Works and now works at Transportation Choices Coalition. This gripe has nothing to do with Urena, who should be a great addition to the Board.

My concern about Gifford’s ousting is that it is such an insult to someone who has volunteered so much to the city. She didn’t deserve to be treated this way by the Mayor of our city. This also sends a terrible message to other community members which might be interested in volunteering their time to help Seattle. There are plenty of other community organizations that will appreciate the gift of your time.

I am also concerned that at a time when the Mayor cannot even manage to hire an SDOT Director or even attempt to accomplish the Department’s voter-approved work, she is instead micro-managing the leadership of a powerless volunteer advisory board.

Seattle Bike Blog thanks Casey for her work on the Board. Your ousting is the city’s loss. Barnett reports that Councilmember Mike O’Brien is considering appointing Gifford, which would be great for the Board. But I wouldn’t blame her if she said, “No thank you.”

This entry was posted in news and tagged casey gifford, jenny durkan, seattle bicycle advisory board. Bookmark the permalink.