If you moved to the north end of Seattle after the summer of 2011, you may have no idea that there was an epic debate over city plans for a road safety project on NE 125th Street. That’s because the project, once completed, was a slam dunk. The street became safer for all users, easier to walk across and more comfortable to bike along. Traffic volumes and travel times hardly changed at all.

But the fight was truly awful. Few media outlets have taken the chance to point out what a success the project has been, but they were sure happy to rail against Mayor McGinn and other supporters of the project before the city completed the work.

But the project did catch the eye of Smart Growth America, which highlighted it as a success story in its walking-focused 2014 Dangerous By Design report: 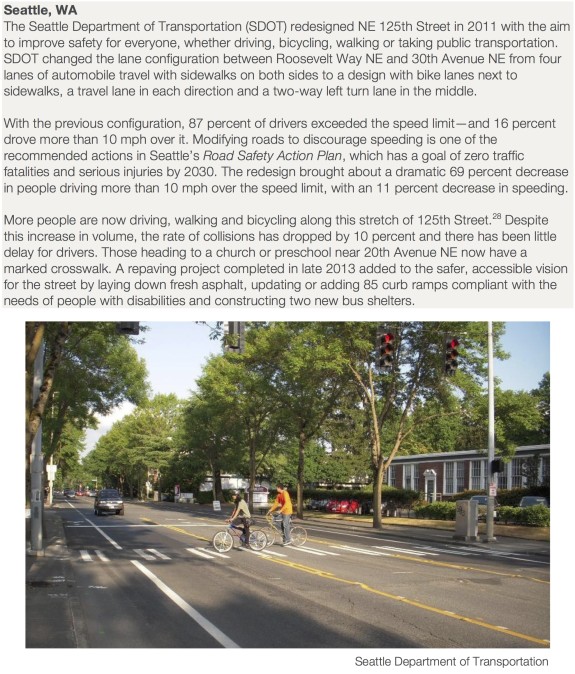 The city repainted some lines on a dangerous street and dramatically decreased speeding and collisions. It also increased comfort and access for residents walking and biking. The results are so promising, it’s shocking the city is not doing the same to every single street with similar characteristics.

The report crunches the data further and finds that, between 2003 and 2012, 375 people were killed in traffic while walking in the Seattle-Tacoma region:

As horrible as these deaths are, you might be shocked to learn that the Seattle-Tacoma region ranks 3rd safest out 51 regions included in the plan (the Pittburgh and Boston areas were deemed safer). This, of course, is no reason to start patting ourselves on the back. The number of people seriously injured or killed on our streets is completely unacceptable.

But it is evidence that we know how to make our streets safer. Seattle has a record of success when the city chooses to act. As the bitter fight over NE 125th (and today’s fight over the Westlake bikeway) shows, there will be resistance to needed safety changes in many areas of the city. But it is the duty of our elected officials to do the right thing and protect the lives of Seattle residents.

If Mayor McGinn had chosen to cave to intense pressure from angry opponents of the NE 125th Street changes, data suggests that several more Seattle residents would be fighting to recover from serious, potentially lifelong injuries right now. One of us might even be dead, and the table above would have one more number added to its death tally.

SGA also updated their map of people who have died while walking on America’s streets. The Seattle section reinforces the need for a safer downtown, the need for safe street projects in every Seattle neighborhood, and the need for dramatic action on Rainier Avenue, Aurora and Lake City Way are (2003-2012): 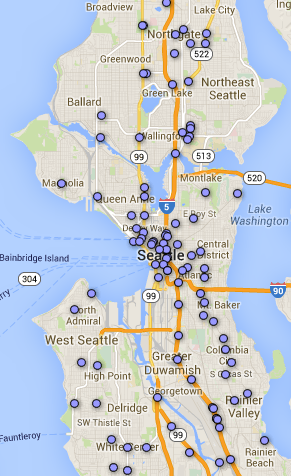 Founder and Editor of Seattle Bike Blog.
View all posts by Tom Fucoloro →
This entry was posted in news and tagged dangerous by design, ne 125th, smart growth america. Bookmark the permalink.