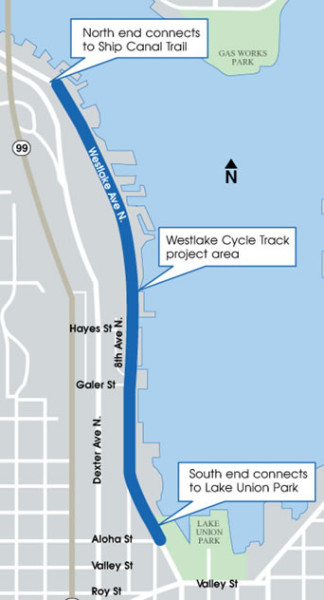 The city’s plans for a safe and comfortable bikeway on Westlake are at a pivotal point, and they will be gathering feedback during an open house Wednesday, 5:30 – 8 p.m. at Fremont Studios (N 35th and Phinney). The project presentation will start at 6:15 p.m.

As we reported in April, planners are gathering feedback to inform and develop the plan for the bikeway, which will be built in the super-sized publicly-owned parking area to the east of the roadway. Planners presented two basic ideas in April, both of which would be vast improvements over the dangerous and confusing status quo:

Concept A would travel along the west side of the area between the parking and the road. It would have more potential conflicts with cars turning in and out of the parking area, and it would also cause a larger reduction in the number of parking spaces.

Concept B (pictured above) would travel along the east side of the area between the parking and the storefronts. It would be closer to the waterfront and have fewer conflicts with cars. It would also have a lower impact on the number of parking stalls, a concern of some neighboring businesses and residents. However, designers would have to make sure interactions with people on foot are safe, since people walking from the parking lot would cross the bikeway to get to homes, workplaces and businesses. The existing raised crosswalks in the parking lot are a great start, but other design elements can make sure people biking can see and yield to anyone crossing on foot.

Both bikeway concepts will make Westlake a less stressful place for people driving and people on foot, since everyone will know where to expect each other to be traveling. The end result will likely incorporate elements of each concept, plus some other variations to make sure the bikeway works well and fits well within the existing business and residential uses.

Today, huge numbers of people bike their own paths through the puzzle of parked cars and driveways, since no clear good path exists. This increases stress for all users and creates dangerous situations for people on bikes, as this tweet from Sunday illustrates:

My friend was just hit by a car backing out on Westlake. Appears to be minor injuries. #SEAbikes

Meanwhile, the number of people biking through the area is increasing dramatically. A bike counter on the Fremont Bridge, located just north of the project area, has been showing a 20 percent increase in the number of bike trips compared to last year. Last week, every weekday saw more bike trips on the bridge than the previous year’s record.

An exhaustive traffic study of the area shows that during peak hours, significantly more people bike through the Westlake parking area than drive. Yet other than a couple sidewalks, nearly the entire 150-feet of city-owned right-of-way width (that’s wide enough to land a 737) is dedicated to driving and parking cars. There are 1,712 spaces to park a car, but zero bike lanes. 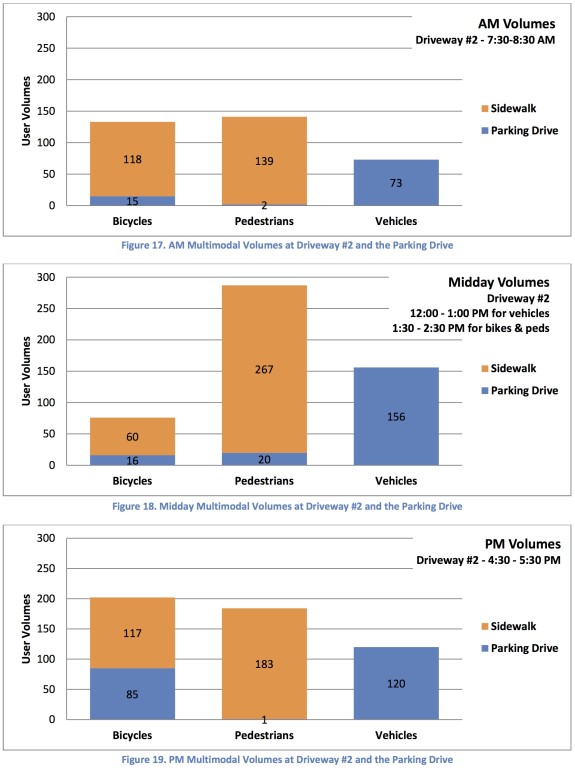 Very extensive parking use studies (see second part of this post) suggest that planners can minimize the number of parking stalls removed by the bikeway project by redesigning the parking area to make it more efficient. But even more importantly, the city can adjust the parking rules to make sure the parking spaces are used for business and residential access. Car and truck access is important to many of the businesses along Westlake, and the city should make sure that the parking spaces it provides are designed to support the economic development and success of the area.

However this is often not the case today. Most of the parking areas that do fill up are free and have no time limit. This allows people to use the lot as a free park-and-ride to avoid paying for a parking spot at their downtown or South Lake Union workplace (AKA “hide-and-ride”). Providing a free park-and-ride close to the city center is not good public policy, and this kind of use does not help Westlake businesses or residents. It can be avoided by implementing concepts, such as 2-hour limits or expanding the number of metered spaces.

With smart design, the city can make a more efficient parking area that meets (and perhaps even improves on) the needs of Westlake businesses and residents. The city can also improve safety for the great many people who bike through the area today. But even these benefits miss the biggest point:

A Westlake bikeway that is safe and comfortable for people of all ages and abilities will open new possibilities for people to travel between north Seattle and the center city neighborhoods on their bikes. The bikeway is for people who are not yet biking as much as it is for all the people who already do. The bikeway will open up amazing new access to Westlake businesses to people who would never consider biking there today. It will also connect Lake Union Park and Gas Works Park, providing an almost-entirely-separated bike route between the two major public spaces.

The so-called Westlake Stakeholders Group, which has opposed the bikeway plans, is selling t-shirts that say “Save Westlake’s Working Waterfront” to support their continued work to preserve the status quo of a dangerous, inefficient and confusing parking area. Project planners need to hear support for a safe and important bikeway that will make Westlake better for everyone, including Westlake businesses. So swing by Wednesday and make your voice heard.

Cascade Bicycle Club is trying to get an idea of how many people are planning to attend the meeting. If you’re interested, you can RSVP with them.

You’ll also have another chance to get involved Thursday, when Cascade leads a policy ride along Westlate on the way to the Ballard Street Bike Party. Details:

Show your support for the future Westlake Protected Bike Lane by riding with hundreds of fellow bicyclists as we head to the party to end Bike Month — the Ballard Street Bike Party. In addition to riding through Westlake, we’ll also explore routes for future protected bike lanes on 7th and 9th Avenues in downtown and South Lake Union, the Burke-Gilman Trail, and the temporary improvements on NW 45th Street to the Missing Link.

After the ride, hangout at the Ballard Street Bike Party to cap off Bike Month. The official happy hour will be at the BalMar where you can enjoy beer specials from the Peddler Brewing Company.

Led by the Cascade Bicycle Club and Connect Seattle.

Founder and Editor of Seattle Bike Blog.
View all posts by Tom Fucoloro →
This entry was posted in news and tagged westlake, westlake cycle track. Bookmark the permalink.