An archaeological dig on NE 125th Street, one of the final battles in the War on Cars 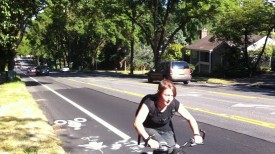 The lucky among you do not remember the vicious fight over a 2011 road diet on NE 125th Street, which pitted neighbors against neighbors in a drawn-out and ugly battle over ten feet of road space in North Seattle.

Prompted by rampant speeding and a pattern of dangerous collisions, the city proposed changes that would keep traffic flowing, but in a way that was safer for everyone. The project changed a highway-style four-lane street from Lake City to Pinehurst to one with a general lane in each direction, bike lanes on both sides and a center turn lane.

The fight that preceded the changes, however, was emotionally draining and depressing. But it may also have been a defining dark moment for bike advocacy in Seattle that created a wide-open space for a more family and neighborhood-oriented focus to earn the spotlight and finally reframe the discussion about safe streets.

Excerpt from a widely-circulated letter opposing the changes (click for larger image). Every single bullet point has turned out to be dead wrong.

The city proposed a road diet on NE 125th Street in 2010, and all hell broke loose. A group of neighbors got angry and started posting road signs and letters opposing the project, and some even gathered signatures on a petition against the project. They expressed fears that the changes would cause traffic congestion and would increase traffic on side streets.

The Seattle Department of Transportation’s weapon of choice was data. They released piles and piles of percentages, vehicle speeds, daily traffic volumes and national traffic safety data. But no amount of data from SDOT explaining why Traffic Armageddon would not happen seemed to ease the concerns. In fact, it almost seemed to make people more angry.

How angry? Well, the Seattle Weekly ended up publishing a piece comparing me to a Klansman. Really, that happened.

I was in my first year of writing this blog, and I tried my best to anticipate the same faulty arguments that came up during difficult fights over Stone Way and Nickerson changes, confronting them as they popped up. It was like playing fact-check Whac-A-Mole.

Of course, most people don’t really respond well to being told they are wrong. Worse, the entire debate occurred under the framing of whether there was or was not a “War on Cars.” Even with the facts on your side, that’s a terrible place for the public debate to be held. Sitting in traffic is an awful experience, and here we were saying, “We just want to take a little bit of the road but, don’t worry, your traffic at least won’t get worse, we’re pretty sure.”

In retrospect, of course that didn’t work very well. The mayor may have decided to OK the project, but a lot of people had soured on the whole idea of bike lanes.

The changes became a symbol of how Mike McGinn only cared about people who bike. It no longer mattered that the primary impetus for the changes was general road safety, especially for people on foot. Every fact SDOT laid out was immediately disregarded as lies, pawns of a car-hating mayor trying to justify his land grab.

A follow-up study has shown that SDOT was exactly correct in their analysis of how the changes would affect traffic levels and traffic safety. Most importantly, high-end speeding decreased by as much as 75 percent, and injuries dropped 17 percent:

Not only is the road safer, but the number of vehicles moving down NE 125th actually increased slightly after the changes. The capacity of the street was not reduced, and it was plenty capable of absorbing an uptick in traffic as people began avoiding tolling on 520 by using 522 instead. NE 125th connects 522 to I-5.

Remembering the awful fight — which dragged my personal reputation through the mud — I saw the SDOT study and immediately got excited to finally have my chance to rub it in the naysayers’ faces. But in writing this piece, I’ve discovered that the battlefield in the War on Cars is no longer active, and there’s nobody left to say, “I told you so.” It’s already overgrown, the weapons are abandoned and rusty. Flipping through old posts about NE 125th feels more like digging through an archaeological site.

It all seems so silly now. Like so many actual wars, we are left wondering, “What on Earth were we fighting about?”

Just ten days after Mayor Mike McGinn wrote a lengthy letter explaining why he was going forward with the controversial NE 125th Street changes, I wrote the first post in a four-part series about two groups of neighbors — one in Wallingford and one on Beacon Hill — who had started getting together with the intention of gathering a coalition of residents, organizations and businesses in their neighborhoods to urge road safety changes. They were frustrated that they could not safely or easily bike to school or to the grocery store with their kids because the streets were too dangerous. This was my first big story about Seattle Neighborhood Greenways.

With that, these neighborhood greenways groups completely reframed the discussion about safe streets. It was no longer about jockeying for precious road space during rush hour, it’s about everything we do as people who live in a city. It’s about the youngest and oldest of our neighbors. Dangerous streets divide our neighborhoods when we should all be connected. Dangerous streets hurt those we care about.

Most importantly, it doesn’t have to be this way. We now have a framework for organizing with our neighbors to make our neighborhood streets safe.

A couple months after the mayor’s decision, a series of people died while biking. Each death was a tragedy, but so many people died in such a short time frame that people were devastated and overwhelmed by the carnage.

Adonia Lugo (now the Diversity Manager at the League of American Bicyclists), Davey Oil (now co-owner of G&O Family Cyclery in Greenwood) and I organized the Safe Streets Social, a community bike ride that visited the memorial sites of Mike Wang, Brian Fairbrother and Robert Townsend. The ride was about showing support for those who had lost loved ones, but it was also about creating a safe space to talk about the trauma of road violence and about the need for both infrastructure and cultural changes if we are ever going to live in a truly safe city for cycling.

Mayor McGinn also took action, organizing the Road Safety Summit, which turned into the Road Safety Action Plan. Seattle Neighborhood Greenways leaders were invited to be part of the shaping of this plan, which puts people and neighborhoods at the forefront of the city’s road safety efforts.

The War on Cars was not won. Rather, we all just realized it never really existed in the first place.

Today, there are neighborhood greenway groups in more than 20 neighborhoods stretching beyond the Seattle borders. Neighbors are organizing in Central, South, West, and North Seattle. There are groups in Kirkland and Federal Way, with more popping up all the time. 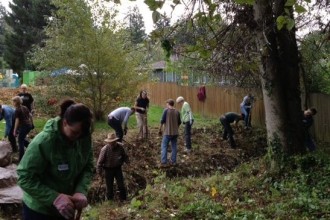 And yes, there is a very active group in Lake City, where the battle of NE 125th Street was fought just a few years ago. Just last week, they took to one of the city’s most dangerous intersections holding picket signs urging people to pay attention to people in the crosswalks.

They are also helping to build a park that will be a key piece to the Olympic Hills neighborhood greenway. Here, neighbors are coming together because they want to create a park and a safe place for people of all ages to walk, bike and otherwise enjoy the place where they live together.

The fight over NE 125th Street was a huge learning experience for a bike advocacy movement that was growing out of its bike commuting and recreational riding shoes. It was becoming one key part of a safe streets movement that every single person is invited to join. Biking and safe streets was becoming mainstream, and it was time to change how we talk about city cycling or make way for people who will.

A simple and inexpensive road safety project on NE 125th Street turned into a bloody modal war pitting people who drive against people who bike in a fight for a couple feet of road space. It highlighted and exaggerated small differences between neighbors — what kind of vehicle you most often use — instead of building on points where we agree. Everybody wants streets to be safer. Everybody wants people of all ages to be able to get to the store, school or park safely and easily.

Everybody wants to live in a strong neighborhood in a strong city with healthy and efficient choices for getting around town. And that’s what safe streets are actually all about.

29 Responses to An archaeological dig on NE 125th Street, one of the final battles in the War on Cars