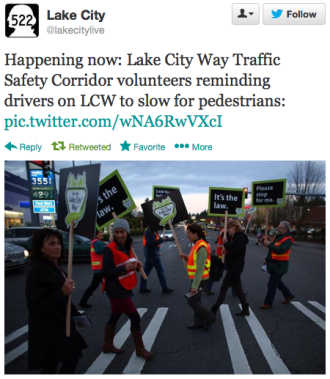 Yesterday, Lake City residents took to the streets carrying picket signs. Their cause?

“Please stop for me.”

Lake City Way is both the heart of the neighborhood and a state highway. As such, it sees an unusually high share of traffic violence. State and city data shows that the intersection with 130th Street is among the most dangerous in the whole city for people walking.

For one hour during evening rush hour, residents crossed the intersection’s crosswalks carrying the signs. This action was organized with Lake City Greenways, and it’s only the first in what Lake City Traffic Corridor Project leaders hope will be many more. From Janine at Lake City Greenways:

This action will be the first of several, aimed at raising the awareness of those who drive on LCW that this is our Main Street and we need to be able to walk and roll on it safely. The Traffic Safety Corridor Project will engage different groups and neighbors in Lake City in future actions

Meanwhile, across the nation, New York City residents took to the streets in Jackson Heights. The group, calling themselves Three Children Too Many, rallied against death and injury on their streets.

Among the speakers were Amy Tam and Hsi-Pei Liao, a couple who lost their three-year-old daughter when a person driving an SUV struck and killed her as she was walking in crosswalk with her grandmother.

The Parents of Allison Liao Speak at the Three Children Too Many Traffic Safety March from Streetfilms on Vimeo.