Times: Stop building places for people until we can fit more cars 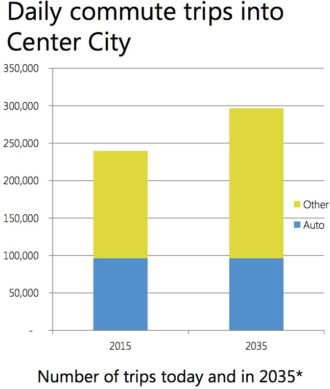 The Seattle 2035 plan assumes that congestion downtown is already bad enough, so we should try to maintain current car levels and grow other modes to accommodate new homes and jobs. Brier Dudley calls this a “war on cars.”

Seattle Times Editorial Board Member Brier Dudley penned his magnum opus on the rights of cars in Seattle this week, arguing that Seattle should stop building places for people to live and work until we can figure out how to get more cars into the city.

And he exhumed the “WAR ON CARS” rotting horse carcass so he could kick it a few more times, just to illustrate his point. No, I’m not joking. Here’s his opening:

Seattle can no longer deny it’s engaged in a war on cars.

Mayor Ed Murray’s new growth plan is a shock-and-awe campaign targeting anyone who dares to drive in, through or around Seattle.

Shock-and-awe! Donald Rumsfeld has been hired to bomb Seattle’s parking garages into submission. Well, Brier, you’ve got my attention. What is this menacing military strategy Seattle has against the car?

But the most radical change is Murray’s plan to stop using congestion as the criteria for whether streets are performing.

…. uh, seriously? That’s it? You’re mad the city is changing the metric they use to measure roadway level of service so that it counts people and goods instead of only counting cars? Zzzzzzzzzzz…

Come on, man! I thought you had something better than that.

Over the next 20 years, Seattle will aggressively convert street right of way to non-vehicular use, discourage creation of parking capacity as the city grows, and minimize parking at public parks, limiting their accessibility. It may also toll streets to pay for such improvements.

In what universe is 20 years an “aggressive” time frame? That’s two decades! Shit, man, you’ll be lucky if you can still afford a gallon of gas in 2036. Hell, we might be SCUBA diving in Alki storefronts by then.

Scene 1. A Seattle coffee shop in 2036. An aging white man talks to his hologram friend, who has chosen the 3D avatar of Thomas Jefferson.

AWM: This city has been going downhill ever since our socialist leaders started measuring street efficiency based on moving people and goods instead of moving cars.

Reading Brier’s column with your bare eyeballs will really make your head spin, so I suggest finding an unlocked car, putting the column on the outside of the windshield, then reading it from the driver’s seat. Ahh, now the words line up and make sense.

From Brier’s perspective, people don’t count if they aren’t in a car.

Most of all, this shift gives the finger to those who drive cars, meaning nearly all residents and businesses. 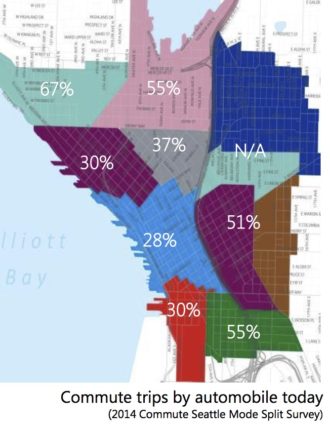 Brier, the city has moved on. The vast majority of people who work in our most congested center city area already do not drive there. In recent years, the number of Seattle residents who drive alone to work dropped below 50 percent. This is a good thing, and a trend the city needs to encourage if it wants to continue growing. Which is really all this plan is saying.

Seattle needs to think bigger. As the state hub of commerce and culture, its streets are critically important to millions of people, most of whom don’t have the option of riding a bus or a bike instead.

So because many people today “don’t have the option” to take a bus or bike, Seattle shouldn’t work to increase access to safe biking and efficient transit? Don’t you see the contradiction in this line of thinking?

Congestion also hurts Seattle’s cultural vitality. Arts organizations are losing patronage as people give up trying to drive and park in the city.

There aren’t enough close-in residents to support all the arts, clubs and eateries. They must draw people regionally.

To ensure streets aren’t overloaded, cities must use level-of-service standards to grade performance. If streets fail, cities can limit development until improvements are made.

Seattle’s going its own route. It says single-occupant vehicles are inefficient so reducing them improves level-of-service. That’s debatable.

Finally, he gives up the game in the last paragraph, writing:

Worst of all, City Hall’s assuming that driving is optional — a lifestyle choice — and it can force people to change how they live. 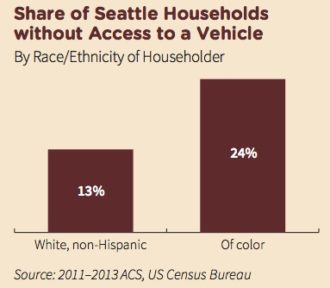 Graphic from the Seattle 2035 plan.

To Brier, the concept of “people” is essentially interchange with “cars.” Nevermind that there are a whole lot of people in Seattle who do not drive (including one in four non-white households), they don’t count.

And nevermind that Seattle added 15,300 new residents last year (and that the city will continue adding 40 more people every day) who arrive without an established transportation method around the area and are willing to use the easiest and most cost effective method available.

The only people who count are the people who are already here, already drive everywhere and don’t want to change or invest to help other people make different transportation choices than they make themselves.

Give it up. If there is a war on cars in Seattle, it’s a civil war. Your enemy isn’t bike lanes or bus lanes or updated level of service planning metrics. Your enemy is basic geometry. As the saying goes, “You aren’t stuck in traffic, you are traffic.”

Seattle does not have any more space for roads and parked cars, and it hasn’t for a long time. So Seattle’s job is to plan for a city that can grow in residents, jobs and culture. It’s sad that the Times Editorial Board doesn’t want to be part of the city’s future, but they’re digging their own grave right next to that dead “WAR ON CARS” horse.

Founder and Editor of Seattle Bike Blog.
View all posts by Tom Fucoloro →
This entry was posted in news and tagged brier dudley, seattle 2035, seattle times, seattle times editorial board. Bookmark the permalink.

52 Responses to Times: Stop building places for people until we can fit more cars