Sound Transit 3 is not about light rail, it’s about bringing our region closer together 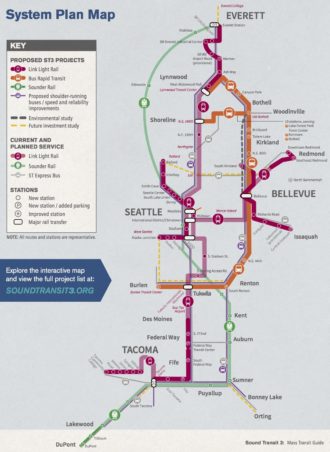 So much of the debating over the Sound Transit 3 vote has been about taxes or traffic or whether buses are better than trains or whether the size of the package is too ambitious. These points are all missing what’s really are the core of this decision: Loving our neighboring communities and wanting to be closer together.

Major investments in 20th Century freeways fueled sprawling growth across the region, encompassing old cities and towns while creating new ones on farm land and wilderness. In a literal sense, those freeways connected these homes to Seattle and to each other.

But those freeways also divide us. They physically cut through communities, creating barriers for everyone trying to get around by walking, biking and taking the bus. This need to buy, fuel, insure, park and maintain a car levies a de facto toll on access to these parts of our region.

The need to own a personal car to get around in so many communities also creates miserable traffic. And traffic makes neighbors hate each other. Road rage is socially acceptable and almost routine. It’s a seemingly natural result of people hopelessly trapped in their cars with no other option for getting around. If that asshole in front of me would just drive five mph faster or if that bike lane weren’t there or if that kid in the crosswalk would stop lollygagging, I’d be there by now.

If it is miserable to get to another part of the region, you won’t want to go there. This creates even more divisions between us.

But it doesn’t need to be this way. Voting YES on Sound Transit 3 is about creating a very different future for our region.

ST3 is about building portals between regional centers, teleporting people reliably and completely outside the freeway traffic grind. Of course it won’t eliminate traffic, but it will give people another choice.

More importantly, it’s about bringing your community closer to other communities. Tacoma will no longer be an unpredictable stop-and-go slog away from Seattle, it will be a couple chapters of a book away. Ballard and Capitol Hill will feel right next door, not a city apart. People in Redmond could choose on a whim to go hang out at businesses in the West Seattle Junction.

The state is still building more and wider freeways, and they are using your taxes to do it without ever asking for your vote. Our region can make a different choice, but you have to make it happen with your ballot. No, that’s not fair, but it’s our reality. So let’s do it.

Vote YES on Proposition 1. And if you can, volunteer with the campaign to help get out more YES votes.

Founder and Editor of Seattle Bike Blog.
View all posts by Tom Fucoloro →
This entry was posted in news and tagged sound transit, st3. Bookmark the permalink.

26 Responses to Sound Transit 3 is not about light rail, it’s about bringing our region closer together