After not moving an inch for months, the Washington State legislature is moving at lightning speed this week to pass a so-called “compromise” transportation funding package that preserves much of the bike/walk safety and access funding in the version of the package we saw earlier from the House.

But the package also spends many billions on new and expanded highways, includes protections against clean air standards and provides authority for a Sound Transit 3 vote (but at a cost).

The new package of bills has already passed mostly out of the Senate and is expected to hit the House floor today. Stay tuned for updates.

Seattle Transit Blog wrote a scathing post today lambasting the package for holding transit “ransom.” The proposed law only gives Sound Transit the authority to put a $15 billion ST3 measure up for a local vote in 2016 on the condition that, if it passes, the agency gives about $0.5 billion back to the state’s general fund. So billions go directly to highways, but transit gets taxed if local voters pass it. That’s all backwards.

On the other hand, Transportation Choices Coalition and Futurewise are pushing for passage of the bill even with all these problems. There’s also talk of putting the package up for a statewide referendum, which I can’t imagine would pass (and would having it on the ballot impact the outcome of the Move Seattle vote? Hard to say.).

Efforts to preserve the bike/walk safety and access funds proposed by the Democrat-controlled House in April were pretty successful. The compromise package passed by the Republican-controlled Senate includes:

Thanks to Senator Andy Billig (D-Spokane), the compromise deal also includes a commitment that WSDOT direct $86 million in Federal funds it receives in the next 16 years to Safe Routes to School. This smart use of Federal funding was not in the House version.

If you include this commitment for Federal funds, the total funding for bike/walk projects is about $320 million over 16 years, up from $236 million in the House version.

However, the Complete Streets Grant Program would get $106 million in the compromise package, down $54 million from House version. So that’s a significant safe streets hit between the versions.

“In the context of negotiations, the numbers for walking and biking show that there is a growing bipartisan and statewide interest in improving health and safety, as well as growing local economies through increased bicycling,” he said.

In fact, remember how Senate Transportation Committee Chair Curtis King (R-Yakima) wanted to toll people biking on the 520 Trail earlier this year? Well he’s singing a very different tune today, even adding walking and biking projects in his district to the bill.

Biking and walking are not inherently partisan activities, so it’s great to see the Republican-controlled Senate get on board, even if it is still only a tiny piece of the highways pie. All added together, it’s about 1.5 percent of the $16 billion package (2.1 percent if you add the complete streets and bike-related transit list funds or 6 percent if add all multimodal investments together).

Of course, the package still needs to make it through the House, and you never know how things will change.

Below are some specific bike/walk projects that would be funded by this package (not pictured but included in the transit list: $5.5M for bike share expansion in Kirkland, Bellevue, Redmond and Issaquah, and $10M for the Northgate bike/walk bridge): 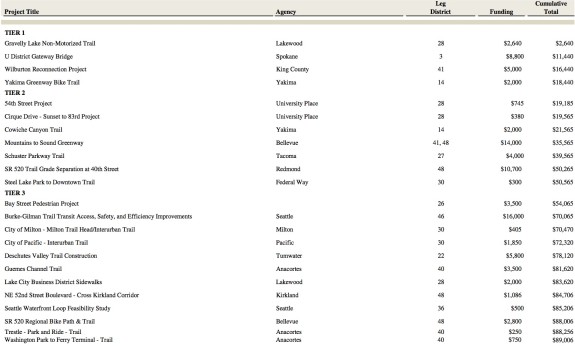 So should this package pass? Well, that depends on whether you feel good about getting a better deal next year, I guess. Or —if you’re willing to hold off on ST3 and the other good stuff — the next year or the year after that…

Governor Jay Inslee rolled over on the clean air standards “poison pill,” and neither he nor other legislative leaders have made a significant case against highway expansion spending, either from a climate change perspective or due to their impact on public health, sprawling communities and furthering traffic congestion. The kind of package Washington really needs would have strong investments in maintaining the roads we have, making them all safer for everyone and focusing on true mass transit. But that package feels very far away.