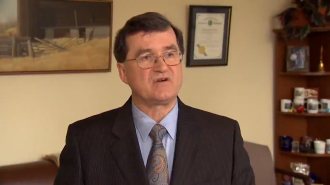 Usually when people throw out ideas this bad, we just ignore them. But this one comes from the Washington State Senate’s Transportation Committee Chair, so I guess we need to respond.

No, tolling people biking on the new 520 Bridge is not in any way a good idea.

It’s true, Senator Curtis King (R-Yakima) told King 5 that he wants to toll people biking across the still-underfunded 520 Bridge to “help us pay for it.” Sigh…

In a rational world, there are two good reasons to toll a bridge or road:

Tolling people on bikes would accomplish neither.

But, since this idea clearly comes from some other realm with no relation to reason, let’s break down some of King’s concerns. 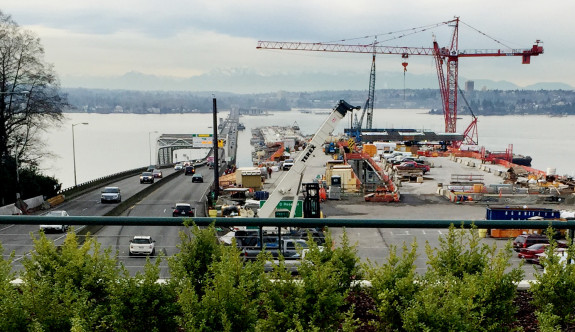 The old 520 Bridge on the left has no space for biking and walking. The new bridge is much wider to accommodate more lanes and will have a trail.

“Fair is fair,” Sen. King continued, “Somebody had to pay for (the bike lane).”

Fair? He has got to be kidding. You know what is actually not fair? Banning people from biking or walking across the 520 Bridge for the past 52 years and counting. Providing a space so people can choose to cross the bridge without owning a car or taking a bus is correcting a wrong, not giving some kind of hand out to people biking.

People choosing to bike is actually one good way to help reduce congestion, though perhaps the Senator has not noticed that the state’s biggest economic engine has something of a traffic problem.

And why single out bikes? Why not also toll people walking across the bridge in the new trail (there is no “bike lane” in the 520 design, only a trail shared by people biking, walking, skateboarding, in wheelchairs, etc). Or why not have toll enforcers hop on buses and collect additional tolls from riders who already paid their standard fare? And how come carpoolers and children get free rides in the passenger seats of cars?  **Shut up, Tom, don’t give him any ideas!**

But, ok, I’ll bite. So how would a trail toll work? Would it be proportionally based on vehicle axle weight (so $1.75 car toll would be 1 and 3/10 cents for a bike)? Or would it be proportional to the miniscule percentage of the $4.65 billion project budget that went specifically to the trail (not sure it’s possible to tease this from the budget, but I assure you it’s a very small percentage)? In either case, the state better invent a coin worth fractions of pennies, because people are gonna need some to pay these tolls. The new collection bureaucracy alone would certainly cost more than the tolls would bring in, though staffing toll booths to collect actual pennies from people biking by could provide some jobs in the area.

In all seriousness, the 520 Bridge project is by no stretch of the imagination a biking project. It is a giant highway expansion project. The trail is being built largely because people want it and because it would be completely insane in in 21st Century to invest this much money and not allow people to have basic walking and biking access.

The fact that Senator King has somehow convinced himself that he is some kind of victim of people years in the future unfairly riding their bikes across Lake Washington for free is truly bizarre, and it’s especially troubling that this is the guy in charge of the Senate’s Transportation Committee.

Washington needs transportation solutions that work for everyone everywhere. Seattle is the state’s biggest economic center, and the city needs to find solutions to the city’s chronic transportation congestion. That means some tolls for personal cars, but it also means encouraging people to choose transit, biking and walking when they can. If Senator King can’t see this, how is he supposed to lead our state to a stronger economic future?

Founder and Editor of Seattle Bike Blog.
View all posts by Tom Fucoloro →
This entry was posted in news and tagged curtis king, king 5, sr 520. Bookmark the permalink.