The new 520 Bridge Trail brings our region closer together 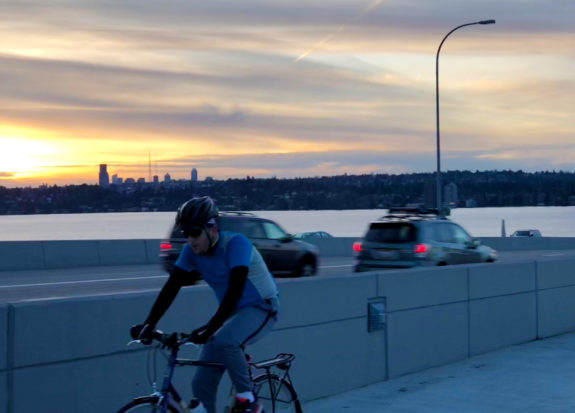 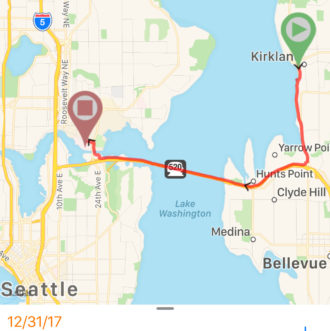 Hard to believe this is now a leisurely bike ride.

The trail across the new 520 Bridge opened just before Christmas, opening new possibilities for biking in the region.

For example, a trip from downtown Kirkland to UW Station has been cut in half, and you can make it most the way either completely separated from car traffic or in a painted bike lane. Even at a leisurely pace, the ride takes around 45 minutes.

A bike ride to downtown Bellevue would take a similar amount of time.

I knew this bridge connection was going to create new opportunities for more trips, but what I didn’t expect was how many kids I would see biking there on my first trip across. The trail was bustling, with lots of people walking and biking. But it seemed like about half of the people biking on the bridge were kids under 10 with their parents. This is certainly anecdata, and maybe it was just a quirk of it being New Year’s Eve or still being novel. 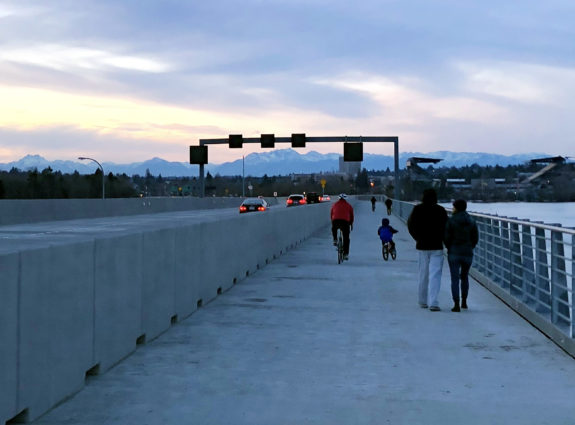 I highly suggest going for a sunset ride on this bridge. 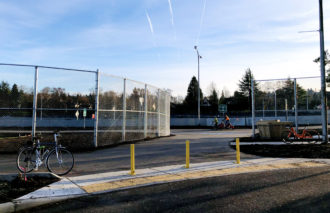 But there is definitely something about the design of the trail on the bridge and the connections on both sides that makes this trail far more comfortable and easy to use than the I-90 Bridge.

The new trail is significantly wider than the I-90 Trail, which makes it much more comfortable for people walking, families and commuters to all mix. There are also a series of viewing areas with benches to allow people to stop and take in the incredible views of the lake without being in the middle of the trail. Where the I-90 Bridge feels like a means to get across the lake, the 520 Bridge is also a destination of its own.

But perhaps most importantly, the connections are much better, especially on the Seattle side. Accessing the I-90 Bridge from Seattle is whimsical (there’s a bike tunnel!), but it’s not particularly easy or intuitive unless you live in the Central District or Mount Baker.

The 520 trail, on the other hand, is easily accessed from both UW Station and the Burke-Gilman Trail. You can get to and from these major pieces of car-free transportation infrastructure without ever mixing with busy traffic. And thanks to LimeBike, Spin and ofo, you can usually find a bike at UW Station you can hop on for $1 (I saw quite a few people bike share bikes on my trips across the bridge).

On the east side of the bridge, the trail does go up and down a couple significant hills between Evergreen Point and Lake Washington Boulevard. And you can still throw your bike on a bus pretty easily at any of the major 520 stops. In fact, King County Metro’s otherwise out-of-service “deadheading” buses will continue to offer free rides across the bridge for people with bikes as they have for many years.

The connection to Kirkland 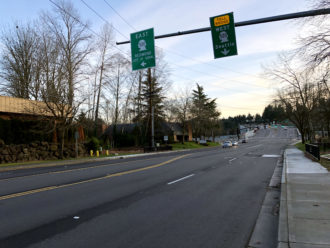 A couple blocks of wide, stressful street design separates the 520 Trail from the bike lane into downtown Kirkland.

Now that the bridge trail exists, I will be looking at connections into the Eastside’s bigger cities. We start here with Kirkland.

You can also climb up a short, fairly steep hill on 108th Ave NE past the South Kirkland Park and Ride to get to the amazing Cross Kirkland Corridor trail, part of the under-development Eastside Trail.

Have you ridden the bridge trail yet? Has it changed the way you get around the region? Let us know in the comments.

Excited to kick off the opening of the @wsdot_520 bridge trail w/ @UW and @ChooseUrWayBell! #SEAbikes #bike425 #bike520 pic.twitter.com/mJgLjoTKmF

Founder and Editor of Seattle Bike Blog.
View all posts by Tom Fucoloro →
This entry was posted in news and tagged 520 trail, kirkland, sr 520, wsdot. Bookmark the permalink.