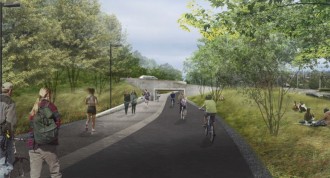 The state will fund a Burke-Gilman Trail remake through UW. Image from a failed 2014 TIGER grant

Today, the WA House passed the appropriations part of the 16-year transportation package, earmarking money for lots and lots of highways and highway debt.

We here at Seattle Bike Blog are certainly distressed by all the new and expanded highways, but we’re especially concerned by the lack of leadership from any major voice in Olympia to connect highways to sprawling communities, traffic congestion, public health and climate change. The kind of package we would wholeheartedly support — focused on safety, transit (both urban and rural) and road/bridge repairs — was never even discussed.

But in this post we’ll try to put that aside and focus on the roughly six percent of funds that are directed to truly exciting multimodal (bike/walk/transit) projects.

Six percent might sound like a pitiful amount (because it is), but it represents a sevenfold increase in biking and walking funding compared to the previous 16-year transportation package passed in 2005, according to Washington Bikes. Indeed, walk/bike funding managed to forge its own bipartisan path through the legislature and make gains when other elements were being compromised away.

While Seattle Bike Blog typically focuses on biking in major urban centers, WA Bikes has made great strides highlighting to rural or small city legislators how safe streets, biking to school and bicycle tourism are powerful and relatively low-cost investments in their communities.

“No matter where you stand on other elements in the Washington state transportation spending package, one message is clear: we won big for biking and walking projects,” WA Bikes said in their blog post. They also created a handy online form so you can thank your legislators for the bike/walk funds (even if you don’t like all the highway funds).

Wait, so what’s in this for biking?

Passage of the transportation package means the UW will get the funding they need to totally rebuild the Burke-Gilman Trail through campus, the city and Sound Transit will get a $10 million boost for the Northgate walk/bike bridge, the Eastside is getting bike share and more (see below).

Perhaps in all the recent debates over the transportation package, you’ve lost track of what’s good in it. Here are the walk/bike numbers:

And here are some of the specific walk/bike projects in the Puget Sound region (see the full lists in these PDFs: Walk/bike and transit):

And here are the trail projects included in the two-year capital budget (from WA Bikes): 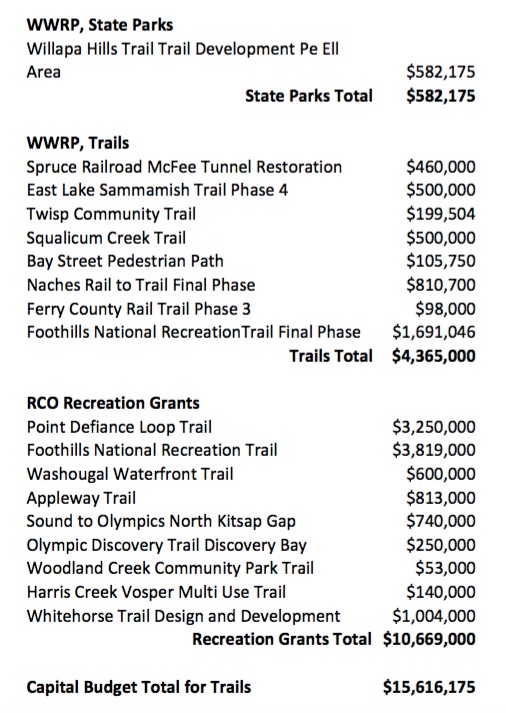 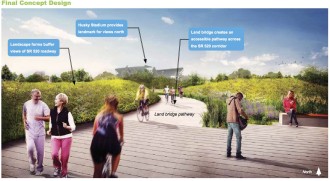 And, of course, the exciting bike/walk connections pasted onto the 520 Bridge replacement and expansion project are now funded as part of that $4.47 billion megaproject (it had been short about $1.6 billion for Seattle-side work).

That means there is now funding to complete a trail from Roanoke Park in North Capitol Hill/Eastlake all the way to the Eastside. There is also funding for a new crossing of the Ship Canal near the Montlake Bridge to improve the biking and walking connection between Montlake, UW Station and the Burke-Gilman Trail.

Oh, and Sound Transit got the authority it needs to put an ST3 measure on the ballot in 2016, a Presidential election year that gives an ambitious light rail vote a much better chance of passing.

The last silver lining for this package is that it is paid for mostly through a gas tax increase. The cost of gas is one of the biggest factors in people’s decisions about whether they will drive or find a different way to get around, so a gas tax is a good thing on its own. I’m certainly not trying to argue that this offsets the induced demand and new car trips created by expanded and new highways or that the gas tax will actually be enough to truly offset the damage highways cause to communities, the environment and public health. But it’s a little extra squirt of mustard on that shit sandwich.