Gov. Inslee tries to save face on climate change by spending bike/walk money on highways 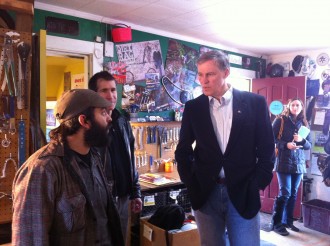 Governor Jay Inslee dug one hell of a climate change hole by pushing a highway-filled transportation package through the legislature a couple weeks ago. And now he’s trying to save face by digging deeper.

The Governor is currently mulling an idea that would trade hundreds of millions of dollars in bike/walk safety and trails funding for so-called “clean” fuels standards. WA Bikes has sent out an alert telling supporters to oppose this idea. You can use their handy online form to send Inslee a message yourself. Here’s a taste of the same letter:

Right now you have backed into a false choice between achieving your carbon emission reduction goals and biking and walking safety (a stated priority in your own Healthiest Next Generation Initiative). I support you working to explore other options to reduce the state’s carbon emissions, but not at the expense of sacrificing immediate investments in the health and safety for our children, better bikeways, and complete connections for biking and walking that, not coincidentally, also reduce our state’s dependence on fossil fuels.

Let’s rewind: 94 percent of the $15 billion package is already directed to highways, and most of that funding will go to new highways or highway expansion projects (not necessary maintenance or paying off previous highway-building loans). These are long-term investments in more driving, more sprawling car-dependent developments, more public health crises and more greenhouse gas emissions.

On top of that, Republican leaders also included a “poison pill” that would transfer most multimodal funding — for biking, walking and transit projects — to highways if the Governor takes executive action on so-called “clean” fuels standards. Most people assumed that by allowing the poison pill through, Inslee was rolling over on implementing those standards, which “would gradually lower the average carbon intensity of fuels by 10 percent by 2027,” according to the Washington State Wire.

I guess we were fools. The Seattle Times reports that Inslee pulled a fast one on safe streets proponents because he is considering swallowing the pill:

Despite the poison-pill regulation, Inslee’s office has signaled he is still considering moving ahead on a low-carbon fuel standard. While that would trigger a shift in transit money, Inslee and his allies could gamble on a fight to restore the funding in a subsequent legislative session.

Inslee once again fails to make the connection between highways and greenhouse gases, despite the fact that the state’s Department of Ecology says half of Washington’s greenhouse gas emissions come from transportation. By abandoning the only funds in the transportation package that would actually help residents of our state get around without a car, he’s not doing the environment any favors.

But far worse, the money he’s considering pulling is designed to prevent people from being killed or seriously injured while walking or biking. This isn’t just horse trading one environmental policy for another. These are lives we’re talking about.

Safe Routes to School would be slashed nearly to death by this decision. $56 million can build a ton of safe crosswalks, sidewalks and bike routes for kids all across the state to get to school safely. That’s the great thing about walking and biking safety projects: Your money goes a lot further. $56 million doesn’t get you very far in a highway expansion project (it’s about 1.3 percent of the 520 Bridge Replacement budget), but it could dramatically improve safety in communities across the state.

Also on the chopping block: The Northgate bike/walk bridge, which would provide a sorely needed safe way for people to cross I-5 to get to the under-construction Northgate Station and Northgate Mall. It would also cut $14 million for fixing the most dangerous missing sections of the I-90 Trail in Bellevue and $16 million for finally repaving and remaking the Burke-Gilman Trail through UW campus. And those are just a couple examples of the $235 million in biking and walking projects across the state that are at risk.

When you add transit funding, the total comes to about $2 billion in quality projects providing non-driving options and safe streets around the state.

Cascade Bicycle Club joined WA Bikes Monday morning in calling for the Governor to find another way to get the fuels standards passed. This choice between safety and fuel standards is a false construct:

While we applaud the governor’s commitment to combating climate change, it should not come at the cost of all of the funding for bicycling he and the legislature just approved.

Obviously, we are not against the governor’s fuel standards. Ten percent fewer greenhouse gases by 2027 is a good thing. But just imagine how much better we would do if Washington residents had more transportation options.

Half of all trips are less then three miles. Imagine if the state invested boldly in providing safe biking and walking routes connecting neighborhoods to parks, business centers and schools. Many people would happily shift a huge number of those short car trips to non-motorized modes, reducing congestion, improving public health and cutting greenhouse gases. As a bonus, fewer people would die in traffic collisions and our communities would be better places to live.

Inslee could have been a leader on truly efficient, sustainable and healthy transportation, which is why this is so distressing. It doesn’t matter if you make gasoline slightly less damaging to the environment if you commit the state to drive even more than we already do. With enemies like Inslee, oil companies don’t need friends.

And once again, biking and walking safety is thrown under the bus (which, of course, now runs on a reduced schedule).

20 Responses to Gov. Inslee tries to save face on climate change by spending bike/walk money on highways