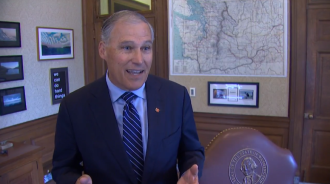 Screenshot from the King 5 report. Click or scroll down to watch.

Governor Jay Inslee was literally backed into a corner in a recent King 5 report, a pertinent visual for the Governor’s tricky position thanks to the “poison pill” provision in the state transportation package that would sacrifice walking and biking safety funds for so-called “clean” fuel standards.

“It is ludicrous to make Washingtonians choose between safe buses and cleaner air,” said Inslee. And he’s right, of course. The poison pill, inserted into the new transportation law by Republicans, is a gross — though admittedly clever — political play aimed at hurting Inslee rather than making smart policy.

But when Inslee decided to allow it through in order to move forward a massive highway spending package, he certainly didn’t make it clear that he intended to swallow the thing. If he had, supporters of Safe Routes to School and a whole list of quality biking, walking and transit projects funded by about $700 million of the $16.1 billion law not going to highways would have revolted and fought the package (see our previous coverage for background).

That’s why Washington Bikes and partners like Transportation Choices Coalition and even the League of American Bicyclists are getting loud, urging Inslee not to cut this biking and walking safety money in lieu of fuel standards. This has put Inslee in a tough spot because people who bike have been a mainstay of his support, in part because he likes to bike himself.

$235 million dollars won’t go very far if you’re building a new highway (the 520 Bridge Replacement Project has a budget of $4.65 billion, for example), but it is an unprecedented amount for biking and walking safety and access improvements. With that funding, the state can help communities across the state build a ton of new sidewalks, improved crosswalks, trails and even help fund some bigger projects like the Northgate bike/walk bridge.

And as WA Bikes Executive Director Barb Chamberlain told King 5, “A biking or walking investment is always an investment in cleaner air, always.”

If you are still on the fence about this, remember that this fuel standard would be an executive order. There’s no guaranteeing that the next governor won’t just reverse it on day one. But this Safe Routes to School and multimodal transportation funding is for 16 years, the duration of the whole transportation package. It would be very unwise to simply throw that away, dedicating our state to basically only building highways for the next decade and a half.

If supporters of the fuel standards can pack the legislature next election, then they can pass a more permanent version then. Or an initiative of the voters could put it in place. Neither of those would trigger the “poison pill,” which specifically applies to executive actions.

But if state leaders stab biking and walking safety supporters in the back, that’s not going to help them next election season. Rather, it feels like Inslee is playing right into his Republican opponents’ hands by splitting his base.

15 Responses to King 5: Inslee backed into corner on ‘poison pill’