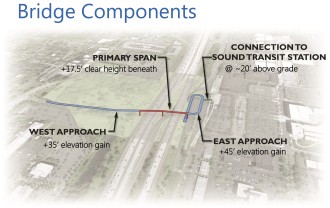 The Northgate biking and walking bridge would connect North Seattle Community College and its surrounding neighborhood to Sound Transit’s planned light rail station on the opposite side of I-5. It would also provide a rare comfortable crossing of the wide freeway in the north end.

But the project remains about $15 million underfunded, and existing agreements between Seattle and Sound Transit say the transit agency will drop the $5 million it committed to the project if full funding is not found by July. After the city failed to win a competitive Federal TIGER grant, regional and city leaders — including King County Council Chair Larry Phillips, Seattle City Councilmembers Mike O’Brien, Tom Rasmussen and Sally Bagshaw, State Senator David Frockt and State Representatives Jessyn Farrell and Gerry Pollet — got together to request more time to find the funds.

In a recent response, Sound Transit staff say they will recommend that their Board extend the deadline to February 2016. While not a huge amount of extra time, it will give leaders more opportunities to identify funding options.

Details from Sound Transit (read the whole letter in this PDF):

The Northgate Pedestrian and Bicycle Bridge will provide a safe and efficient crossing over Interstate 5 for bicyclists and pedestrians and will improve connectivity to the Northgate Light Rail Station, North Seattle College, the greater Northgate Urban Center and the surrounding neighborhoods.

As you know, the Sound Transit Board recognized the importance of these vital connections and committed $5 million toward the bridge project when they approved Motion No. M2012 –42 on June 28, 2012. The Motion stated that Sound Transit funding was contingent on the City of Seattle matching this funding amount and obligated the City to identify remaining bridge project funding by July 2015. This funding commitment and deadline were approved by both the Sound Transit Board and the Seattle City Council.

The July 2015 date was identified as the original funding commitment deadline in order to allow sufficient time for Sound Transit to modify its Northgate Station final design plans to incorporate any changes required to accommodate bridge project needs prior to awarding the station construction contract in early 2016.

Sound Transit staff understands that the City of Seattle has not yet secured full funding for the bridge project and therefore will be making a recommendation to the full Board at its March 26 meeting to extend the deadline to February 1, 2016.