Yes, Seattle has a parking problem. There’s way too much of it. 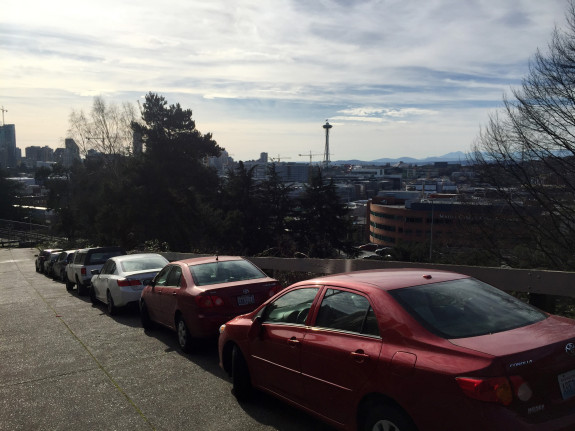 Seattle has some of the world’s most stunning car parking spaces.

There are half a million on-street parking spaces in Seattle, and almost all of them are completely free to use. That’s 60 million square feet of city land, or 1,378 acres. And that’s not counting all the parking lots, parking garages or home driveways and garages. Sightline estimates that between 10 and 20 percent of the total land in Pacific Northwest cities is dedicated to parking cars.

City land is very valuable, and there is actually no such thing as “free parking.” We all pay to maintain these millions of square feet of city-owned parking space whether we drive cars or not. There are 2.2 parking spaces per car in the region, which means by Sightline’s measures the average value of the space reserved for parking a car (~ $11,000) is thousands of dollars higher than the value of the average car itself (~ $8,000).

Of course, the city does need parking. Short-term parking and loading zones allow many customers to access businesses and for workers to deliver goods. The transit system does not serve all homes in the region well, and Puget Sound cities are not nearly compact enough for everyone to be within an easy walk or bike ride. For a wide variety of reasons (many of them due to purposeful car-centric community planning decisions), driving is simply the mode of transportation that makes the most sense for a lot of people’s lives.

But Seattle has far too much parking. And contrary to what you may have seen on King 5 or in the Seattle Times this week, even busy downtown has way more parking than people can even use. In addition to all the on-street parking, there are more than 50 parking garages in just the center city area. On a typical day, as many as 40 percent of the spaces in these garages are open.

Don’t believe me? Look for yourself. The city tracks live-updated totals for open spaces in just a small number of these center city parking garages. Here’s how many spaces were open at 10:30 a.m. on a Thursday: 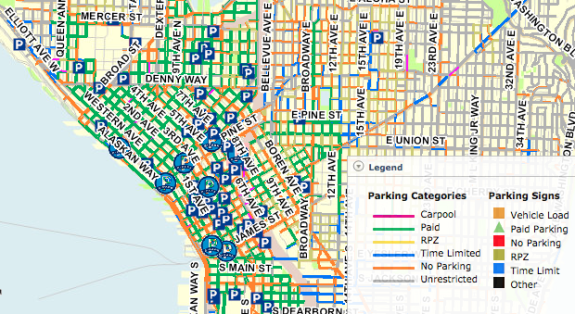 If you can’t find a parking space downtown, you aren’t looking very hard. Or, more likely, you don’t want to pay garage prices and prefer the subsidized rates on city streets. I don’t blame you, parking in a garage is expensive.

But here’s a thought experiment: Let’s say tomorrow morning, thousands of people (enough to fill all the garages) wake up and decide to drive downtown instead of walking, biking, carpooling or taking transit. Downtown’s already traffic-choked streets would completely fail due to the increased number of cars trying to get into those downtown garages. Nobody would get anywhere.

My point is, Seattle has already constructed more parking spaces downtown than people can ever use. The streets can only move so many cars during rush hour, and we’re pretty much at that limit already.

Our city does have a parking problem: There’s way too much of it.

Too much parking costs us all a lot of money

Surface parking lots are terrible for cities, especially city centers and dense neighborhoods. They decrease walkability and desirability of an area because there are fewer destinations that are further apart. They also decrease the number of retail lots and homes in an area. We have known for a long time that surface parking lots kill cities, and many surface lots in the city center have been developed into buildings in recent decades.

But too often, those buildings include giant parking garages, often due to building codes that require parking even though, as we discussed above, we know we can’t use it. Building new parking is insanely expensive, and it’s one big reason new housing and retail rents are so damn high.

Sightline’s Alan Durning did a great job explaining how this works in a 2013 series of stories about parking:

City requirements for off-street parking spaces jack up rents. They jack it up a lot at the bottom of the housing ladder. Proportionally speaking, the bigger the quota and the smaller the apartment, the larger the rent hike. For one-bedroom apartments with two parking places, as is required in places including Bothell and Federal Way, Washington, as much as one-third of the rent may actually pay for parking.

Building underground parking is the most expensive option, and construction costs for required parking spaces can sometimes outpace costs for building the apartment unit itself. Why isn’t Seattle’s recent rapid expansion of housing units in the city center bringing down rents? The cost of all those underground parking garages is one big reason.

Garage entrances can also take up valuable retail space on the ground floor, meaning fewer spaces for job-creating businesses and destinations. And since retail spaces also have to foot the bill for the building’s expensive parking, the financial barrier to starting a business rises. And when you shop in one of these businesses, you pay a surcharge to help pay the business’s increased rents.

All these increased costs are happening even though the city center does not need more parking and more and more people are choosing to get around without driving. It’s all backwards.

And yet developers keep building tons of parking. Capitol Hill Seattle recently reported on a proposed 16-story apartment tower on Broadway at the edge of First Hill and Capitol Hill, among the city’s least car-dependent neighborhoods. Planners want to build five stories of underground parking with 374 parking spaces. A proposed office and retail building on N 34th Street in Fremont would include an underground parking garage with 258 parking spots. These are neighborhoods where 78 – 90 percent of customers do not drive there to shop, according to a 2012 customer intercept survey:

From a 2012 customer survey

Even our transit agency is building a ton of car parking. While Sound Transit and the City of Seattle struggle to find the money to build the Northgate bike/walk bridge to connect the Northgate light rail station to the neighborhood across I-5, they are planning to build a 700-stall car parking garage even though 92 percent of station users are expected to walk, bike or take a bus to get to the station. 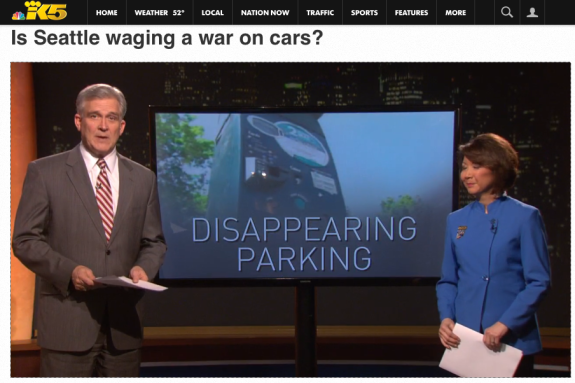 Does any of this sound like a “war on cars” to you? Of course not.

But someone over at King 5 decided it was time to dust off the old “war on cars” phrase for a headline on their latest story about parking changes. And that’s sad because Linda Byron’s actual reporting is much more nuanced and thoughtful than this headline (and the “DISAPPEARING PARKING” header) suggests.

The same happened to Mike Lindblom’s reporting in the Seattle Times. The text of his story is nuanced in its approach to changes in the city’s approach to on-street parking. But here’s what editors did to it on the front page:

This terrible infographic is essentially a body count of lost parking spaces, completely devoid of the context that there are still half a million on-street parking spaces in Seattle and that — as we discussed earlier and Lindblom points out in his story — downtown parking garages are 40 percent vacant.

And, of course, both reports point the finger at bike lanes as a culprit for the “vanishing” parking. Most of the city’s bike lanes —including more ambitious protected bike lanes on 2nd Ave and Broadway — actually preserve much of the on-street parking. In the case of Roosevelt, most parking on the west side of the street will be removed. Sometimes it makes sense to remove some on-street parking to increase bike access and safety, and this stretch of Roosevelt has seen a lot of collisions involving people on bikes. But that story doesn’t sell newspapers, I guess.

55 Responses to Yes, Seattle has a parking problem. There’s way too much of it.