What does HALA have to do with biking? Everything. 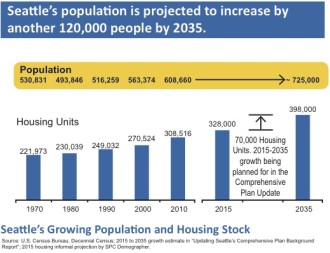 From the Mayor’s Office

Most talk about bike infrastructure focuses on the first way, and of course that’s very important. But the second way is too often overlooked, even though it is just as important.

Housing development as it is today is pretty good at increasing the number of homes in Seattle’s most walkable and bikeable neighborhoods (just look where the cranes are: Ballard, South Lake Union, Capitol Hill, U District, Belltown, etc). But it’s not currently geared to make sure everyone can afford a place in those neighborhoods. And that’s a serious problem.

So if you care about making it easier for more people to make more trips by bike, then you need to get engaged with the Housing Affordability and Livability Agenda (“HALA”) debate.

You can start by attending the city’s Seattle At Work discussion 5 – 7 p.m. tomorrow (Tuesday) at City Hall. For some other ideas, check out Renee Staton’s guest post on Seattle Transit Blog.

Wait! Don’t leave yet! I know HALA debates so far have been confusing and surprisingly heated. But coupled with passage of the Move Seattle levy, the HALA decisions have immense potential to open Seattle’s increasingly bikeable and walkable neighborhoods to more people. And that’s a beautiful vision worth diving head-first into a public debate about.

First of all, if you have only heard angry stuff about HALA, wipe the slate clean and start over. Because there are a ton of really bold and smart ideas in the proposal that have been overshadowed by knee-jerk reactions from some community members and journalists. The proposal is only the stuff that made it through a committee of people who have very different ideas of what should happen, including both affordable housing advocates and for-profit developers.

At the top level, this plan is about how to add 50,000 homes to our growing city in the next decade, 20,000 of which should be designated affordable. People keep moving here, our single-family neighborhoods are out of space to build more houses surrounded by big open yards, and our streets can’t handle more cars.

This is why biking and HALA go hand-in-hand. 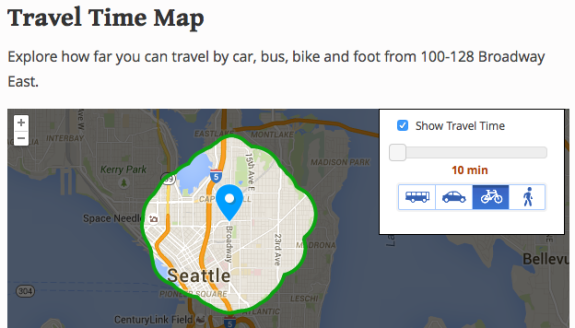 Screenshot of the estimated ten-minute bikeshed around Capitol Hill Station, from Walk Score.

More destinations within a ten-minute bike ride of more homes means more people biking. It’s that simple, really. If biking is the easiest way to get there, people will choose to bike. Safe streets and bike routes are one part of this equation, but destinations and homes being closer together is the other part. We need both.

And on the flip side, increasing density relies on more people choosing to walk, bike and take transit. That’s the only way it can work. 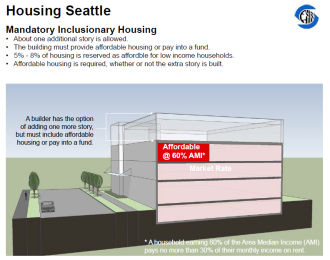 Image from the Mayor’s Office

Focus recently has been on a so-called HALA “grand bargain” in which developers can build a little higher. They must also reserve 5–8 percent of the units for low-income households (or in some smaller cases pay a fee designated to affordable housing). Developers get the extra height they want, and affordable housing advocates get the “linkage fee” they’re been trying to implement. That’s the bargain.

But there are also a ton of other great ideas in the plan. Like rethinking backwards parking requirement rules that add huge costs to projects (and, therefore, home and retail rents) while also adding to the city’s traffic problems. We have written previously about how parking requirements make housing unaffordable. In fact, Alan Durning, who wrote a fantastic series on the costs of parking requirements a couple years ago for Sightline, is a member of the HALA committee.

Fixing these rules is a really easy and cheap way to make housing more affordable. Here’s how the HALA report puts it (emphasis mine):

Parking quotas are a major driver of the construction cost of new housing, especially of small dwellings in more- urban zones. They can dramatically constrain the supply of new dwellings built, because off-street parking requirements consume large shares of building lots. Off-street parking requirements or quotas have a large impact on the financial viability of new housing for both market and affordable housing development. Parking quotas act as density limits, inflate the average size and price of housing units, and prevent some smaller properties from being developed altogether. The City should review parking policies and requirements to make sure they support housing affordability.

A smarter parking policy coupled with Move Seattle’s investments in transit, biking and walking will work hand-in-hand to address two problems at once: Affordable housing and traffic congestion. This is true for dense urban villages and for single family neighborhoods.

Car ownership levels in Seattle correlate with income. Building parking is really expensive, decreases the number of homes and retail spaces, and adds costs to everyone’s rent whether they drive or not. If we are going to subsidize something, it should be homes, not car parking.

Any time you suggest ideas like this, people get worried about finding an on-street parking space near their homes. But affordable housing is simply more important than easy access to an on-street parking space. And when coupled with bold investments to make it easier to take transit, bike and walk, more people won’t need to have a car parked on the street at all. That’s really the best way to free up parking spaces for those who do own cars.

If there’s a parking problem in your neighborhood, the problem isn’t too many neighbors, it’s too many cars.

These parking rules were put in place long before ever-expanding car sharing services or Link Light Rail or protected bike lanes or neighborhood greenways. Our city keeps changing, and yesterday’s thoughts on the need for off-street private car parking can’t hold us back from building an inclusive Seattle tomorrow. 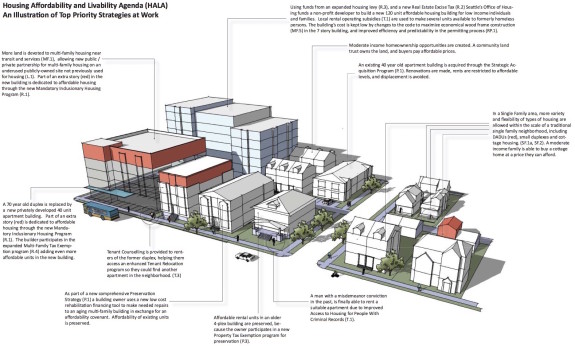 Click to embiggen. Image from the HALA recommendations report (PDF)

Other proposals include making it easier to build backyard cottages, duplexes and other higher-density options that fit well in single-family zones. This seems to scare a lot of people, but it’s really not a scary idea at all (UPDATE: A previously version of this story called this “Mandatory Inclusionary Zoning, but it has been brought to my attention I misunderstood that term. Thanks Rob!). It just frees up options for building more kinds of homes in neighborhoods where there is no more space to build despite increasing demand.

A big reason so many newer townhouses are so ugly is that they are effectively homes on stilts in a swamp of legally-mandated car driveways and garages. We can change the rules to make it easier to build row houses, duplexes, townhouses, apartment buildings and other middle-density options that, done right, could be more affordable and more attractive additions to our residential streets.

Essentially nobody is completely happy with every piece of HALA. For example, I attended a debate over rent control during the summer that was packed with people demanding stronger tenant protections to prevent, for example, rampant rent hike evictions happening to people all over the city. A big enough rent hike is essentially an eviction without cause. And once you’re priced out of your place, odds are low you will be able to find anything in the same area on your budget.

Rent evictions are an injustice that too many affordable housing activists are too eager to ignore or write off as a simple problem of supply-and-demand. Build more housing, they say, and people won’t get priced out. But if you are one of the growing number of Seattle renters biting your nails each month dreading the next rent hike that finally kicks you out of your home (or worse, a person who has already been priced out), someone pointing to the invisible hand of the market isn’t very helpful.

On the other hand, increasing supply is obviously the ultimate solution to affordable housing. If more supply-focused advocates can join with Councilmember Kshama Sawant and other tenants rights advocates on this, they would form an unstoppable political force.

And disagreements between these two camps are so small compared to their collective disagreements with people who have already got their homes and simply don’t want any changes at all. That’s the real hurdle, and it’s going to take an immense push to overcome it.

Move Seattle has set a whole new bar for urban transportation funding in major US cities. Now HALA is the chance for the city to lead on affordable housing. Let’s do it.

30 Responses to What does HALA have to do with biking? Everything.