Hey you! The Seattle Bicycle Advisory Board needs new members 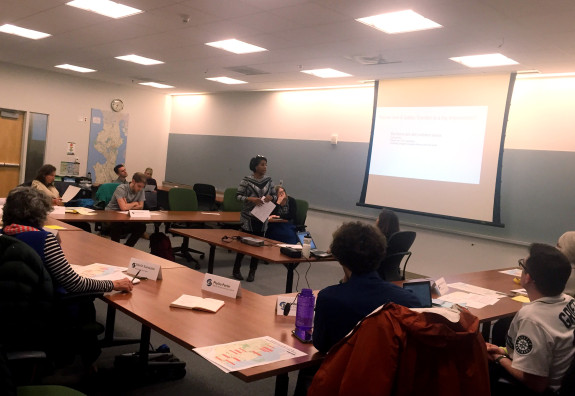 The Seattle Bicycle Advisory Board (AKA the “Bike Board”) is a volunteer crew of advocacy group representatives and everyday residents who serve as a sounding board and watchdog group for efforts in the city that affect bicycling.

I’ve been going to their monthly meetings for nearly six years, and members of this Board really can have a big impact on how projects evolve. You get a chance to hear about projects early (often news is first announced publicly at these meetings), and comments from the Board hold sway with both the Mayor’s Office and City Council.

And fun fact: Bill Nye was once a member of the Bike Board. How cool is that?

The Board is seeking two new members. Terms are two years with an option to serve a second term. You need to commit to meeting the first Wednesday of most months downtown (typically 6–8 p.m. at City Hall).

No expertise with bike policy or engineering is needed, and you don’t need to be a die-hard bike commuter (in fact, people who ride a little but want to ride more may be best). You just need to be a Seattle community member who wants it to be safer and more welcoming to bike in our city.

Anyone can apply, but in my opinion the Board especially needs more people of color and people from immigrant communities. The Board keeps getting more and more focused on safe streets as a race and social justice issue, so this could also be a great chance for someone who wants to help push our city’s bicycling conversation in that direction to jump on board.

Big issues the Board may (or should) discuss in the next two years: Downtown protected bike lanes, bike connections to and within Rainier Valley, and (I hope!) intersections of biking and affordable housing as part of the city’s HALA debate.

More details and how to apply from SDOT:

Do you love biking? Want to make it easier and safer for people of all ages and abilities to get around Seattle by bike?

Then this may be the opportunity for you! The Seattle Bicycle Advisory Board (SBAB) is now accepting applications for two new members to help advise the City on the concerns and needs of our growing bicycling community.

The volunteer board was created in 1977 by our City Council and they help carry out Seattle’s Bicycle Master Plan – our 20 year blueprint to make it easier to decide to ride a bike. Here are a few other tasks that members do:

Mayor Murray and the City Council are committed to promoting diversity in all of our boards and commissions. All persons are encouraged to apply. Board members serve a two-year term, with an opportunity to serve a second term. The current board consists of a variety of people who ride bikes, from casual weekend riders to year-round commuters.  Seattle City employees are exempt from being SBAB members .

Thank you for your interest in our bicycling community!

2 Responses to Hey you! The Seattle Bicycle Advisory Board needs new members