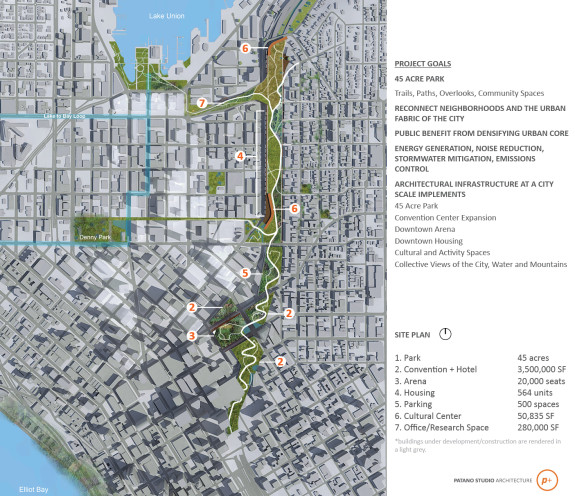 In some places I-5 is a trench. Other places, it’s a wall. Every once in a while, a bridge spans the rushing flow of motor vehicles or a street travels under the immense elevated wonder. But more often than not, I-5 divides communities, destroys biking and walking connections, and covers nearby blocks with constant air and noise pollution.

Aside from the tax dollars we spend to keep I-5 functional, we also pay an immense cost to deal with its other negative impacts on our communities. The freeway also occupies acres of some of the most valuable land in the city.

I know that when a major piece of infrastructure has been such a core part of a city for 50 years it can be hard to imagine things being different. From Denny Way to Lakeview, there’s just no way to get from South Lake Union to Capitol Hill. That’s just how it is.

But it doesn’t need to be that way.

As Capitol Hill Seattle reported in November and the Stranger expanded on this week, there is renewed energy behind the idea that we can lid I-5 in the center city area, complete with an expanded Convention Center, new biking and walking connections, acres of new park and maybe even an arena and affordable housing.

If something like Patano Studio’s C.A.P.ITOL HILL PARK concept were built, it’s very hard to fully understand the immense impact it would have on our city. In fact, the reverberations of such a project are so hard to measure we should move forward and fund a study of potential options and their effects on everything from public health to housing to public revenue.

There’s already a strong push from the Pike/Pine Urband Neighborhood Council for a study of a smaller lid near the Convention Center as part of its expansion plans. That’s a great place to start. Let’s keep going. As Scott Bonjukian wrote at the Urbanist, the time to act is now. 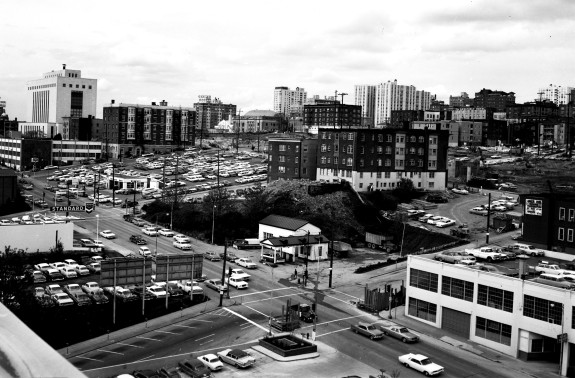 From the Seattle Municipal Archives 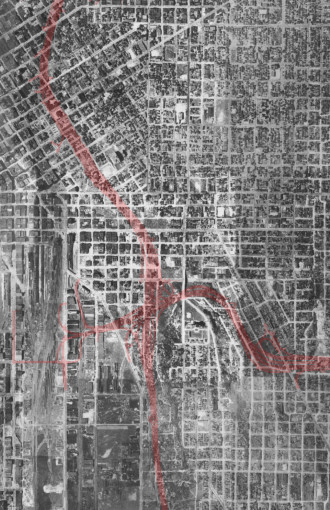 Seattle has changed since I-5 was built. It is much denser, and the city’s transportation future relies on more transit, walking and biking. The city center is the state’s largest employment engine, and it’s obvious we can’t grow it by adding more cars than we already have.

By contrast, the photo above shows what downtown Seattle looked like when I-5 was under construction. Like so many other cities, people believed tearing down buildings to make space for car parking and bigger roads was going to be the future of city centers.

In retrospect, that decision was very short sighted. It has taken a long time for Seattle to rebuilt a dense city center. Many other cities with less investment power than Seattle, like my hometown St. Louis, are having a lot of trouble reviving their city centers.

Meanwhile, Vancouver BC is a flourishing example of a similar city that did not build urban freeways. They are now working to remove the only freeway-like remnants they built in order to build more city in its place.

But we can look back second guessing urban planning choices forever. Seattle has I-5. The relevant question is what we’re going to do next.

“Seattle is greeting new residents at a rate not seen since the gold rush of the early 1900s,” wrote Bonjukian. “The Center City … is now so intensely developed that there are few vacant sites left for new buildings. But growth will continue for the foreseeable future, and the unused airspace over Interstate 5 will inevitably beckon developers and city planners.”

“Establishing a large urban park in Downtown would be one of the most transformative capital projects in Seattle’s history, and there’s only one place it could go,” wrote Bonjukian.

I-5 is going to need significant paving and rebuilding work before too long, and building this lid needs to be part of that work. The more we can understand about the feasibility, costs and benefits the more ready we can be to include a plan in that work.