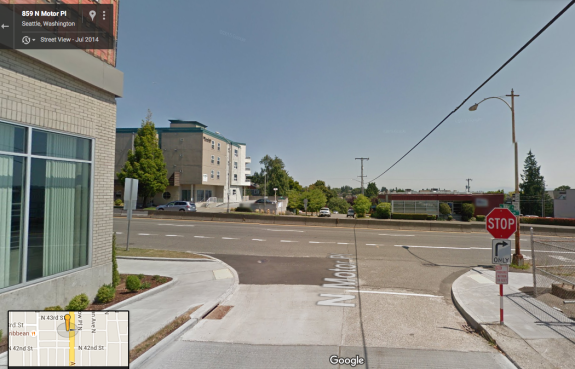 What if Bertha never finishes the SR 99 highway tunnel?

What if SR 99 doesn’t need to be a freeway-style highway through downtown at all?

And what if that’s true for the whole city, too?

In other words, what if we tear down that awful Aurora Ave median wall once and for all?

Forget all about the sunk costs of the tunnel. Step back, take a deep breath, and reassess the situation. Because without a freeway downtown, we could bring those benefits all the way up the highway. Aurora could become what it should have been all along: A busy boulevard. A center of regional commerce and movement. An attraction, not a barrier.

Aurora is not a freeway. It is a commercial highway through dense neighborhoods with a 1930s-vintage freeway (then called a “speedway”) sloppily pasted on top of it. The basic design of the highway is so outdated it comes from an era when state leaders also thought it wise to name it the Jefferson Davis Memorial Highway. Yes, really. So, you know, those dudes made several questionable decisions that could use some revising.

Confederacy-worship aside, the design of Aurora has not evolved with the times and with the city around it. It’s not just outdated, confusing and ugly, it’s also dangerous. A 2008 safety project managed to get collisions down to about one a day and deaths down to one a month. That’s not even close to acceptable.

And unlike with I-5, it won’t take a multi-billion-dollar project to fix Aurora. Instead, all we have to do is peel away the old false freeway and add some more modern boulevard design elements instead.

Let’s imagine an Aurora Ave without the wall, where people can cross the street at any intersection and where people can finally turn left at select locations. To begin, below is a typical section of Aurora today. (You can try out your own designs for Aurora using Streetmix. Dimensions are estimated and vary along the street):

Today, Aurora is basically six lanes with a concrete barrier down the middle. North of Green Lake, it changes to a design with a center turn lane. Some sections also allow off-peak parking in the bus lanes.

If you are a person on foot or bike, the street might as well be a pit of fire-breathing crocodiles. People do sometimes make a run for it and hop the center wall rather than walking many blocks out of the way to find an overpass or underpass. But more often, people just don’t cross it at all on foot. Maybe this design seemed like a good idea back when the state was still naming things after Confederate leaders, but it’s all backwards by modern standards.

So let’s start by tearing down the center wall and, instead, using greenery to create a more calm, attractive and boulevard-style feel. Accordingly, the current speed limit of 40 mph should come down to 30 like most other major busy streets in the city. We could also significantly widen the sidewalks to reach standards more fitting for a major commercial street:

Note that we did lose one lane in each direction. This is a busy street, how can that possibly work?

If the tunnel is not completed, then a lot of the current Aurora trips would disappear or move to I-5 since Aurora no longer provides a stoplight-free through-Seattle connection (the surface boulevard on the waterfront will still make the connection, though there will be stop lights). And though the new design would only be one general traffic lane in each direction, this lane will be able to carry a lot of traffic because the bus lanes can handle right turns and new turn lanes can handle left turns. This way, the single through lane can keep flowing:

Plus, now that people can actually cross the street safely, the already-popular bus service will be even more appealing to more people, further reducing the traffic load.

But the traffic benefits go far beyond just this one street. With the new ability to turn left, for example, the few existing super-congested underpasses (like N 46th Street) will likely get a big break, which could help east-west travel immensely. Even if there is a little extra congestion on Aurora itself, this could be offset by improving east-west flow elsewhere. We have to think of Aurora as part of a traffic system, not a car tube floating in a vacuum.

But hey, isn’t this Seattle Bike Blog? Where are the bike lanes? Don’t worry, we can add them, too:

The new boulevard design also sets up the state and city to make desperately-needed safety improvements to the Aurora Bridge. Essentially nobody finds the bridge comfortable to use today, and the Ride the Ducks tragedy brought the need for a safety redesign back into the forefront of people’s minds. 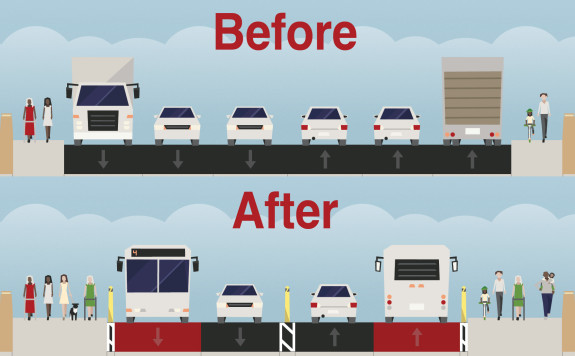 Not only does a redesigned Aurora set up safety improvements on the bridge, but it does so without significantly modifying the bridge (a likely costly endeavor). The biggest change: Say goodbye to those super skinny travel lanes and depressing squished sidewalks.

And because the street is already down to one through lane in each direction, there would be no need for bottleneck merges at the bridge. We can also continue the bus lanes and give buses enough space to occupy just one lane rather than splitting two lanes like they often do today.

In addition to the normal-sized traffic and bus lanes, there’s also space for the center median people have wanted to add for a long time (though with calmer traffic it may no longer be needed).

Better yet, there is also space for much wider sidewalks. At 12 feet, the sidewalks would each be wide enough to handle two-way biking, walking and people stopping to take photos or simply enjoy the view. Because it is a truly amazing view, but it’s a very unappealing space to go today thanks to the heavy traffic whizzing by just feet away.

So not only is the bridge safer and more comfortable for people driving, it is also more efficient for transit and creates an opportunity for new bike route connections. But on top of it all, the bridge can become the iconic destination it should be with sweeping views across Lake Union and down the ship canal.

All these benefits come just by rethinking our need for a single freeway downtown, which traffic studies show will have limited utility anyway since it will not have exits in the downtown core. Aurora has been its awful self since the 1930s, far too long for most people to remember it any other way. The biggest challenge isn’t finding another way to move people and goods around our city, it’s allowing ourselves to imagine such a big change to the way things have seemingly always been.

So I say it again: Tear down the Aurora wall. Reunite the city. Save lives.