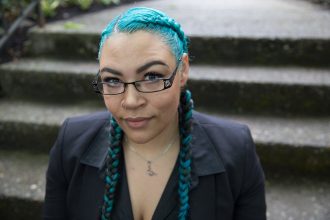 Photo from Sherae For State.

Seattle Bike Blog did not do endorsements this year for a number of reasons (mostly that I haven’t had the time it takes to do a full slate of endorsements). Instead, I rounded up endorsements from a handful of transportation-focused organizations in the area and posted them here. There was very little disagreement.

But there was one split endorsement that caught my eye, perhaps because it is my district. So I figured it may be helpful to weigh in on the race for House Legislative District 43, Position 2. The Transit Riders Union and the Urbanist endorsed Sherae Lascelles while Seattle Subway and the Sierra Club endorsed Frank Chopp. Washington Bikes did not endorse in this race.

This race ultimately comes down to what access to power should look like. Neither candidate says anything notably bad in their transportation policy sections. Chopp, who has been in the legislature since 1995, clearly has a very detailed understanding of how the legislature works. But is it working?

The Democrats have had control of WA State’s government for years, yet the state still has an extremely regressive tax structure, still funds new and expanded freeways while leaving transit funding to local communities, and still has not made meaningful progress on reducing our climate changing emissions. No matter what major local issue you are talking about, conversation nearly always gets to this exchange:

Person 1: Well, in order to do that, we’d need to change state law.
Person 2: Ugh, that’s not going to happen.

This dynamic needs to change. Lascelles brings a dramatically different philosophy to their campaign. Everything in their platform is about centering people most impacted by each policy. For example, here’s Lascelles’ campaign policy statement on free mass transit:

We have already pushed people out of their communities and marginalized our most vulnerable populations. In a new age where this is finally being acknowledged, the least we can do is legislate to fund and build mass, robust, very low-cost or free transit systems that enable folks to go wherever they want to go in the city, whenever they need, and in a broadly accessible manner.

We will form a coalition of those most impacted centering those who have systematically been most marginalized by our transportation systems, including folks with disabilities and BIPOC communities, to determine what legislation must be brought to Olympia to form more just, sustainable, and equitable systems of transit for our people.

In community we will legislate to:

I am inspired by Lascelles’ vision, which is an outlandishly positive and optimistic posture standing in the middle of a very pessimistic year.

Lascelles is running from behind. Chopp did not get 50% of the primary vote, but he got close. However, if we learned anything from the Alex Pedersen/Shaun Scott race last year it’s that nobody should underestimate voters’ desire for progressive leadership and change. Folks thought Scott was down and out after facing a huge primary deficit, and it ended up being the closest Council race. So don’t give up.

Lascelles is running a very unconventional campaign, which is based around mutual aid efforts like handing out hand sanitizer and masks.  Sign up to volunteer here or sign up to Door Knock Your Block.

1 Response to Endorsement: Vote Sherae Lascelles in the 43rd