#BikeTheVote: Your guide to bike-friendly voting in the 2016 general election 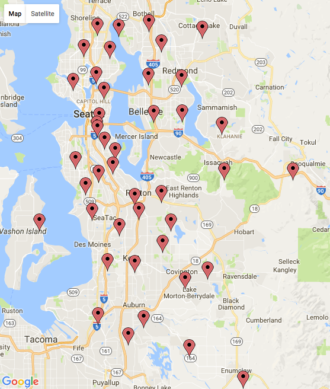 The sooner you vote, the sooner you can switch the station at the first mention of the word “Trump.” But while the long nightmare of this 2016 Presidential election draws to a close, you also have a chance to vote on many important local races and ballot measures that could have a huge impact on our region for the next generation.

While Seattle Bike Blog is not in a place to give you a full set of endorsements for your ballot, I will organize endorsements and voters guides for you in this post. It’s a long ballot, but don’t procrastinate! Vote early and get it off your to-do list.

Your November 8 ballot should already have arrived in your mailbox. If you are out of the area or if your ballot went to an old address, you can print one and mail it in. You can also vote in person. If you have not yet registered, you have until October 31 to register in person.

We’ve already endorsed regional Prop 1 to fund the Sound Transit 3 expansion. But if you live in Bellevue, Issaquah or Kenmore, you also have street improvement measures on the ballot. Washington Bikes has endorsed them:

The Bellevue Transportation Levy is a 20-year property tax levy that would raise approximately $140 million for neighborhood safety, connectivity, congestion improvement, sidewalk, bicycle, technology and maintenance needs. Notably, this levy would improve the potential for investments in Bellevue’s Bicycle Network.

Kenmore “Walkways & Waterways” Bond Measure is a $19.75 million bond measure would invest in 5 significant bicycle and pedestrian and placemaking projects. It would invest in Juanita Drive improvements that would add bike lanes from Kirkland city limits north to 170th Ave (Simonds Rd.). An additional project would connect Safe Routes to Schools projects together with downtown.

A $50 million bond measure that would invest in four projects across Issaquah. A highlight includes investments in two discrete projects on segments of Newport Way that would build bike lanes and/or a multi-use path parallel to the corridor.

Bothell residents will also have a chance to fund a levy for “Safe Streets and Sidewalks.”

There is also a Kitsap Transit measure that would fund a new set of faster and more direct walking (and, I assume, biking) ferries from downtown Seattle to Bremerton, Southworth and Kingston. Aside from providing faster and more direct options for getting around the region, I am salivating at the opportunities these ferry runs would open for bike transportation and adventure: 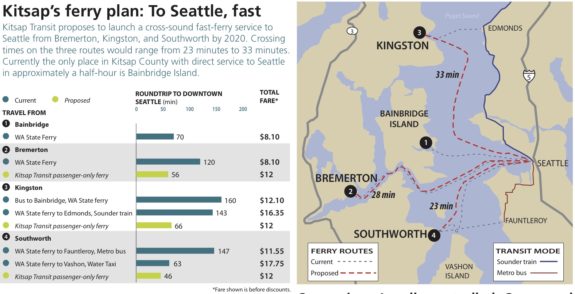 From a Kitsap Transit flyer (PDF)

In the first general election since merging with Cascade Bicycle Club, the new Washington Bikes (now a 501(c)(4) empowered to engage in political action) has endorsed a limited slate of state legislators. Seattle Bike Blog is not endorsing this list, but I am posting it here to start a discussion. You may find some surprises in this list. As with the rest of the issues in this post, let us know your opinion on these races in the comments below.

Here are some more guides to help you work through the issues. Again, we don’t endorse all these choices (and in many cases they disagree with each other), but I in general find these to be good resources. If you have any other ones to suggest, let us know in the comments.

This entry was posted in news and tagged 2016 general election. Bookmark the permalink.

5 Responses to #BikeTheVote: Your guide to bike-friendly voting in the 2016 general election