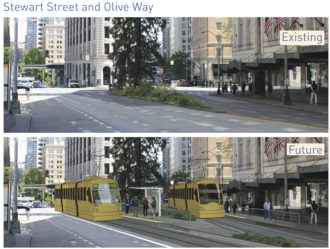 As we reported in depth back in June, we have some serious bike safety concerns about the current plans for this streetcar line, which runs on First Ave and Stewart Street downtown to connect the existing South Lake Union and First Hill lines.

The good news is that SDOT is convening a design review group with advocates and members of the Bicycle Advisory Board to address bike/streetcar safety along the new line. And they are already looking at some improvements to address some of the biggest bike safety concerns. 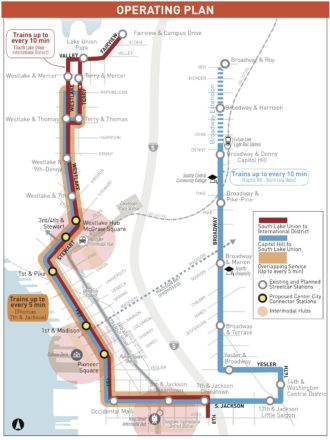 For example, the streetcar would run in exclusive lanes down the center of First Ave. And unlike on Jackson, those streetcar lanes would have cobbles to prevent people driving and biking on top of the rails. But so far there is no talk of separated bike lanes adjacent to the rails like on Broadway, so people driving and biking would need to share one lane in each direction.

Perhaps a bigger concern is Stewart Street. Current designs show no bike lanes on Stewart, which is a major bike route that runs diagonal across the street grid from Eastlake Ave to First Ave.

There’s a lot of work to do to make the streetcar plans safe for people on bikes. But there are opportunities for this investment to make improvements to bike access. Imagine direct and safe two-way bike access on Stewart Street that connects with the city’s planned (but always delayed) downtown bike network, for example. Today, this area is a stressful mess, but with an efficient streetcar, safe bike lanes and planned rapid bus improvements it could be the nexus of multimodal travel downtown. Of course this only works if the city gets to work building that network.

And imagine if this funding included a commitment to go back and fix dangerous elements and missed opportunities of the other lines, such as Jackson Street.

We are eager to support a good streetcar project, and would even be enthusiastic boosters of a plan that includes serious safety improvements for people biking near downtown streetcar lines. But the project cannot add new dangers the way the South Lake Union and First Hill Streetcar lines did. We’ll be watching closely as this project moves forward.