These additions could help restore some of the major Bicycle Master Plan cuts her administration made in the recent years, including a list of south end and downtown projects that advocates fought hard to highlight in the city’s latest bicycle work plan. After cutting the projects entirely, SDOT and the mayor sort of added the projects back as funded through design, but not construction. The latest funds will be “prioritized for projects listed in the 2019 Bike Master Plan Implementation Plan as funded through design and/or planning,” according to a blog post from the Mayor’s Office. So that would be the dotted and gray highlighted areas in this map: 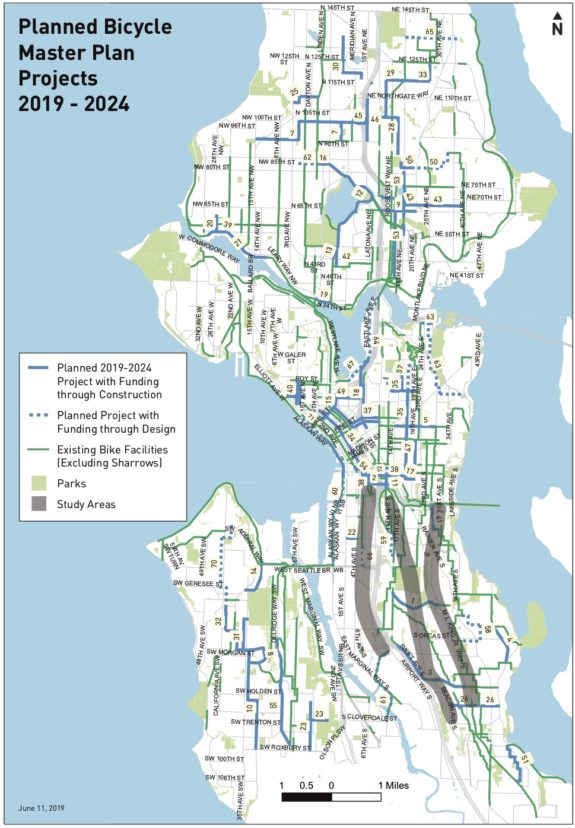 It’s not yet clear whether the $8.35 million for protected bike lanes will be enough to restore all the projects or which ones will get priority over others. It’s also not yet clear whether these funds will sufficient fulfill the City Council’s recent resolution supporting a specific set of downtown and south end projects. But clearly this is better than the dismal outlook from the work plan the mayor released earlier this year.

The mayor’s proposed budget now goes to the City Council, which will spend the next couple months holding hearings, proposing changes and voting on a final budget. And I imagine councilmembers will have their own ideas for the $78 million Mercer Megablock funds.

The transportation outlook in this budget is clearly boosted by the sale of that large parcel of very valuable land in South Lake Union, which the city reclaimed by removing the old Broad Street trench between Valley Street and Seattle Center:

Mayor Durkan has included $78 million in investments from the sale in her budget. Of that, $31 million would go to Vision Zero and transit projects, according to the Mayor’s Office. From the budget proposal (PDF): 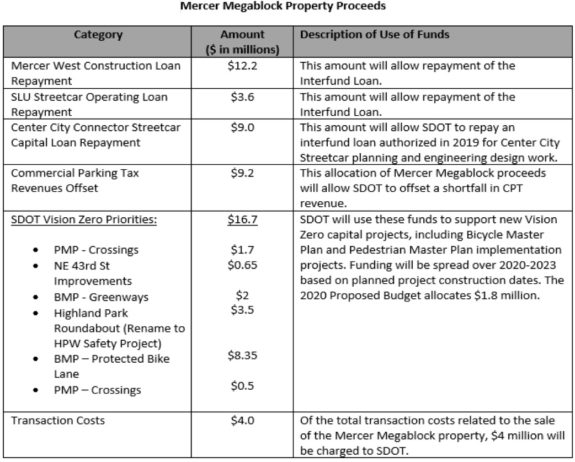 The other big note for biking and walking is that the mayor’s budget “increases Move Seattle Levy funding for the construction of the Northgate Pedestrian and Bicycle Bridge by $1 million in 2020 and increases total project costs by $11.6 million,” according to the budget proposal. “Funding for this project is coming from Bridge Rehabilitation and savings from the S Lander project.”

This entry was posted in news and tagged 2020 budget, jenny durkan. Bookmark the permalink.