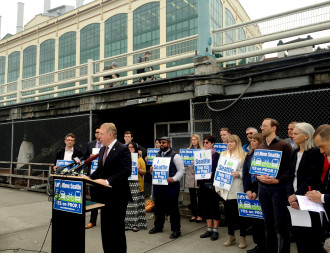 Launching the Let’s Move Seattle campaign next to a timber-supported bridge that needs replacing, feet from where Brian Fairbrother died in 2011

In 2015, Seattle Bike Blog posted 359 stories, which is actually fewer than in 2014. But that doesn’t mean I worked less. Instead, I quietly allowed my personal rule of two posts per weekday to slip in order to give myself the freedom to focus more on bigger stories.

And I think it worked, since traffic to the site went up 25 percent even though the number of posts went down 18 percent. Lesson: Quality trumps quantity, even on the Internet.

So big thanks to all of you for reading! I am so lucky to have the greatest job in Seattle (the country?). Writing about biking in such a beautiful city simply never gets old, and my list of interesting things to write about keeps growing faster than I can write them. All you awesome biking activists and artists and event planners are just the best. Thanks for keeping me busy!

2015 was a big year for biking in Seattle, even though relatively few big new bike lanes were built. Because 2015 was the year we finally took a big step towards filling the biggest piece missing from nearly every city’s safe streets plans: Funding.

Passing Move Seattle was very emotional for me because it wasn’t just a political campaign. It was the product of so many acts big and small by so many people over so many years. And as I wrote the day after it passed, the huge increases in safe streets funding came at an immense cost: The far too many people killed or seriously injured by traffic violence.

I sat down November 4 to write a victory lap post about passing Move Seattle, but instead I found myself in tears as all the memorials and conversations with victims’ friends and family over the past five and half years came back to me. Because that’s the real reason so many of you were so driven to spread the word and rearrange the way our city prioritizes transportation investment. We want safe and efficient streets for everyone, not bigger and meaner roads focused solely on cars. And a solid majority of Seattle voters agree. There’s no going back now.

So Move Seattle is obviously my pick for the biggest story of 2015, but not just because it delivers money or even because it was an election victory. It’s because essentially every other story we have written since this blog started came to a head in that one vote.

Founder and Editor of Seattle Bike Blog.
View all posts by Tom Fucoloro →
This entry was posted in news and tagged year in review. Bookmark the permalink.