Your guide to biking naked in the 2015 Fremont Solstice Parade 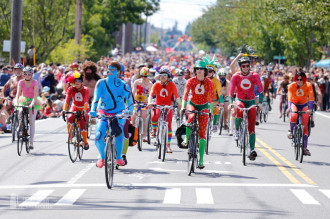 For 23 years, people have been biking naked in front of the Fremont Solstice Parade, an awesome human-powered parade that rings in the summer Seattle-style. Over the years, more and more people have joined in the pre-parade bike ride with recent years seeing perhaps 1,000 riders (there’s no official count, so nobody really knows how many people participate).

The ride helped inspire the World Naked Bike Ride, which happens in cities across the globe each summer. But unlike the WNBR, the Fremont Solstice ride has no overt political statement. Rather, it’s just a mass display of bold creativity.

If you get painted up at your own private painting party, just show up at the parade start at the corner of 3rd Ave NW and NW 36th St between 2:30 and 3 p.m. Don’t be late or they won’t let you in. Or you can join the official group painting party at CSR Marine (4701 Shilshole Ave NW), which goes from 9 a.m. to 1:30 p.m. Then there’s usually a slow tour of Ballard before entering the parade route. Bring $10 to donate.

So you’re thinking of biking naked…

Congratulations! The solstice ride is an absolute blast. Here are a few tips you should know before you start:

Oh, what’s that? You don’t have a bike for the ride? Well, you’re in luck! This is the first Solstice Parade since Pronto Cycle Share launched, and they’re offering six hours of riding without late fees so people can use their bikes in the parade. All you have to do is check out a bike, ride in the parade, return it within six hours and then call customer service (844-677-6686) by midnight to tell them you were in the parade.

But please, do us all a solid and cover the saddle with a plastic bag when you ride!

And finally, here’s one of the funnier fundraising ideas I’ve heard in a while: New this year, organizers will carry your clothes to the end of the ride for a $10 donation to the Fremont Arts Council, which puts on the main parade (UPDATE: Ethan says they had to cancel this service due to a lack of pre-registrations. Still, it was a good idea!). Details:

Solstice Cyclist Shuttle Service: Have your clothes arrive at Gas Works Park for you!

Fremont Arts Council will offer the Stuff Shuttle Service for cyclists from the Paint up Party to Gas Works Park. Fill a box for $10. There will be a U-haul Van parked at the Paint site to offer this service. There will be water bottles for sale at this point as well. All proceeds directly support the Parade. Reserve your box now, they’ll fill up fast! contact [email protected].

Here’s the schedule for the ride:

Founder and Editor of Seattle Bike Blog.
View all posts by Tom Fucoloro →
This entry was posted in news and tagged fremont solstice parade 2015, solstice bike ride. Bookmark the permalink.